Production Brought Out Its beauty 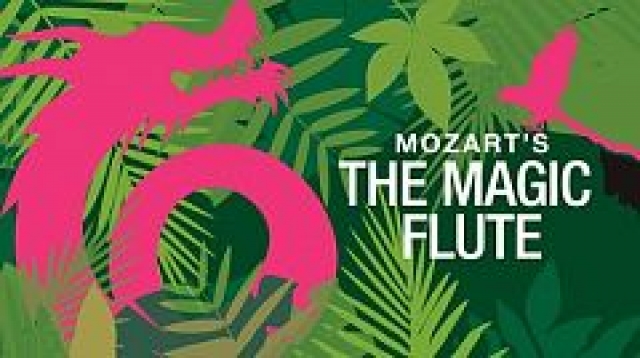 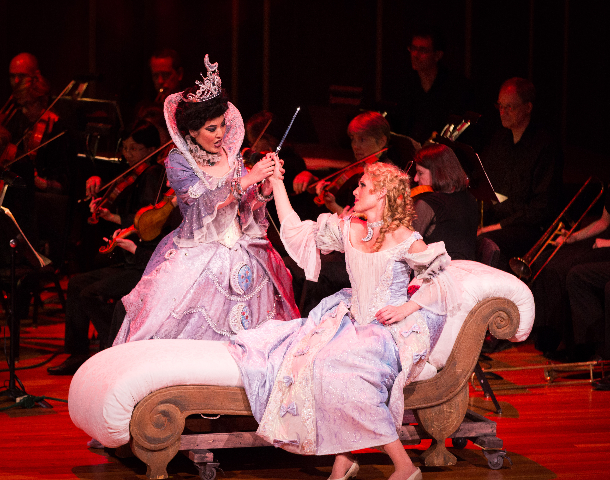 So Young Park sang a brilliant Queen of the Night in Mozart's "The Magic Flute." Here, she is seen with her daughter Pamina, who was sung by Leah Partridge. (All photos by Kathy Wittman.) 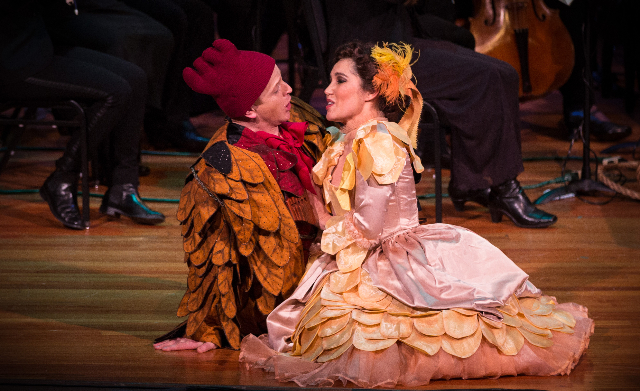 Andrew Garland as Papageno and Sara Heaton as Papagena, here in their bird costumes, singing their irresistible second act duet 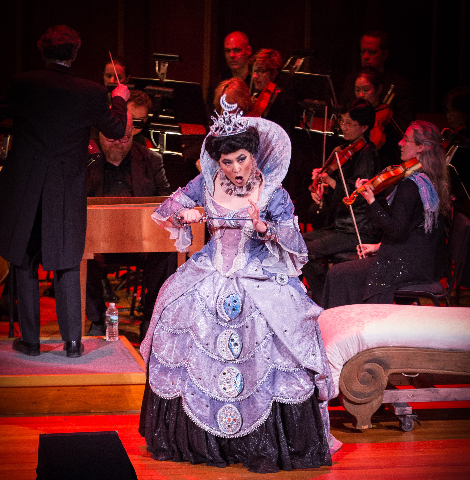 So Young Park as the Queen of the Night

Let me be honest right off the bat – Mozart’s “Magic Flute” is my least favorite opera by the composer and one of my least favorite operas in the repertory. Which puts me in the decided minority. The work is phenomenally popular, the most performed opera in the world. And I can see why – it possesses some of the most infectious music Mozart ever wrote, arias and ensembles that range from low-comedy to opera seria emotionalism to high thoughts expressed nobly, all emerging from a rich, orchestral tapestry. But it’s the story that gets me, every time.

Mozart was commissioned by an impresario named Schikaneder to compose a Singspiel, a work that combines both spoken and sung passages, for his popular, suburban theater. No one ever expected much from a Singspiel, but Mozart gave them more than they usually got, which is why it has wormed its way into the hearts of generations of opera goers. Schikaneder was a Mason, as was Mozart – they belonged to the same Masonic lodge - and Schikaneder’s libretto is steeped in Masonic ideology and symbolism. That is for me the essence of the problem. It takes itself too seriously – imagine “The Book of Mormon” taking Mormonism seriously. No fun! (Or how about a propagandistic opera about L. Ron Hubbard and Scientology?)

I think I should approach the opera as most of the audience does, as a fairy tale with gorgeous music, ignore the text and let the music work its charms. I wish I could, but I am too much of a text-guy, always looking for meaning, which is futile in more operas than just “The Magic Flute.” But I am what I am, and I find the text preposterous and often offensive – and kudos to Martin Pearlman for acknowledging in his program note the work’s misogyny and racism, and not eliminating the racist passages from the supertitles, as the Boston Lyric Opera did in its 2014 production.

Anyway, I’ll try to make light of the complicated plot. It features two pairs of lovers, one high born (Tamino and Pamina), one low (Papageno, a bird-seller, and Papagena), seeking fulfillment - wisdom along with love for the nobles, and bodily pleasures, sex, wine and ample food, for the low. There are many obstacles put in their way. There’s a crazy mother, The Queen of the Night, and her entourage, the fabulous Three Ladies, the original all-girl back-up group, only Twenty Feet from Stardom, all gorgeously gowned and tiara’d. There’s a series of trials set by Sarastro, a wiseman, shaman, high priest, the Queen’s former husband and father of Pamina, whom he has kidnapped. (See what I mean about complicated.) There is also an evil Moor in Sarastro’s service, which raises questions about how wise in fact he is, and Three Boys, representing spirits, who help guide Tamino and Pagageno on their way. Notice how the number three recurs: there are also three temples, representing Wisdom, Reason and Nature and three trials Tamino and Papageno have to go through. Three was meaningful to Masons and is still today a popular “lucky” number.

Pearlman made the evening a delight. Musically, the performance, which was semi-staged, was, even accounting for a few vocal disappointments, close to perfect. The overture set the tone of the evening as overtures are supposed to do. The 40-player period orchestra played the composition, complex for a Singspiel, with verve and tonal brilliance. Its sound was lean, well paced and frequently pungent in contrast to the thick and slow interpretations, which tried to turn Mozart into a Romantic composer, that prevailed until the early music movement began going back to first principles – paying attention to the score and playing the music on instruments of the time the music was composed.

The production, directed by Mark Streshinsky, was not as revelatory as the work he did last season for Boston Baroque’s production of Handel’s “Agrippina.” (Maybe there are no revelations about “The Magic Flute” to make.) He was also hobbled by the costumes, which were rented and looked as if they had come from different operas, and sets, of which there were none. Monostatos’s black and gold military outfit with plumed headdress looked as if it came out of a Baroque opera, while Pamina and Tamino’s outfits were merely opera generic. And the Three Boys’s sashed robes were drab. Fortunately, the wonderful feathered costumes for Papageno and Papagena could have been designed for no characters other than them. And there were the fairy tale animals that came out of the forest to be lulled by the dulcet tones of Tamino’s flute, just like wild animals were charmed by Orpheus. Maybe it was intentional: the opera itself is a pastiche, lurching from mode to mode between spoken passages, so having a pastiche of costumes makes some kind of sense. But I think Boston Baroque was just trying to save money.

(I can’t resist comparing the costumes here to the 2014 BLO production. Based on a hare-brained concept, it was set in present-day Yucatan, with Tamino, Pamina, Papageno and Monostatos students on an archeological dig. Their grunge wear was dreary and discordant with the magical elements of the opera, and Papageno, a bird-seller, who always wears a fantastical costume made of bird feathers, just wore his boring collegiate casual. By contrast, the Three Boys wore adorable white outfits with red sashes and straw hats. Win one, lose one.)

There were both vocal pleasures and disappointments.

Soprano So Young Park, the Queen of the Night, was brilliant, acting with ferocity and singing with passion, the legendary high-notes of her two showpiece arias cutting through the orchestration with crystalline clarity. The ovation for her second act aria, in which she expresses her desire for revenge, was so loud and prolonged that I thought Pearlman might bring her back for an encore, a practice that used to be more common than it is today, but which in rare cases like this would have been justified. (He didn’t, alas. But a conductor who allowed tenor Jonas Kauffmann to reprise “E lucevan le stelle” from “Tosca” two nights in a row in a recent production in Vienna, caused – perhaps - the soprano, none other than Angela Gheorghiu, to refuse to come back on stage.) What’s remarkable is that Park sang the same role, not so persuasively, with the BLO. She seemed uncertain in the first act, and her first aria failed to soar. She recovered for the more difficult second act aria, but it was nothing like what she delivered with Boston Baroque.

Baritone Andrew Garland also sang Papageno with the BLO, and he was great both then and now. (Is he the great Papageno of our times? He is at least among them.) A handsome young man, he looked charming in his long feathered coat and red cap, an outfit that derives directly from the one Schikaneder wore when he sang the role in the original production. (The program reproduces a period print of Schikaneder as the bird-seller.) But it wasn’t his costume that made his performance memorable. Garland has an expressive baritone that ranges from almost tenor territory at the top to almost bass territory at the bottom, a range he negotiates effortlessly. He is a fantastic comic actor, showing Papageno’s insatiable carnal appetites and his cowardice in the face of menace as two sides of his elemental Everyman character. He made the most of his tragi-comic suicide scene, when he keeps on bargaining with himself to not commit the act he is in the process of doing. And as part of Boston Baroque tradition, Pearlman is drawn into the action by serving as the tree from which Papageno strings his noose. Garland was well matched in the final act when he finally meets his long sought-after Papagena, soprano Sarah Heaton, who wore a chicken gown, shaking her booty like a brood hen. Their sure-fire duet, in which they cluck the first syllables of their names, “Papa, papa, papa,” was a total delight.

As the principals, Nicholas Phan as Tamino and Leah Partridge were less than ideal. Not that either of them were totally inadequate, but neither fully inhabited their roles physically or sang with drop-dead beauty of tone. Phan, who sang the Messiah with Boston Baroque a couple of years ago with less than assured vocalism, was better here. He delivered a committed performance, and was occasionally excellent vocally, but in general his voice was thin and weak. His opening aria, “Dies Bildnis …,” sung to a miniature portrait of Pamina, was disappointing. Phan contributed some beautiful pianissimo singing to one of Mozart’s loveliest tenor arias, but he failed to make you melt in the beauty of his voice as he melted with love of her image.

Partridge started out promisingly enough, exhibiting good coloratura and solid middle-tones, but she seemed to tire vocally through the evening, even though her role is light in its demands. By the time she got to her big opportunity in Act II, the ravishing aria “Du also bist mein Brautigam,” in which she contemplates suicide – translated as “Love has vanished… Only death will bring me repose” - an opera seria counterpart to Papageno’s comic suicide opera, she seemed worn out. She acquitted herself well enough, but her voice was thin and lacked tonal allure.

As Sarastro, bass Gustav Andreasson sang well and put across the nobility of the Masonic high priest, although his voice wasn’t able to scrape the depths as the role demands. (Few are able to do it.) As Monostatos, the hated Moor, tenor Owen McIntosh was terrific. He fully embodied an ignoble character, a black man, who was both libidinous (toward a white woman) and cowardly. (Hey, that’s what our darling Mozart and Schikaneder wrote!) He sang well and when he was bewitched by Papageno’s magic bells, he and his henchmen danced off stage in a delightful little knock-kneed dance.

As the Three Ladies, Sonja Dutoit Tengblad, Mara Bonde and Emily Marvosh, soprano, soprano and contralto, respectively, sang mellifluously, their lovely voices melding into a single sound. As Sarastro’s henchmen, baritone Dana Whiteside and tenor Stefan Reed, were appropriately stately in manner and voice. And the Three Boys sang sweetly in the piping manner of boy sopranos and none of their voices broke.

“The Magic Flute” is not a Baroque opera, but Boston Baroque had done it before as well as other Mozart operas. Its strength, however, remains in the core Baroque repertory. I am glad to report that next season its spring opera will be Handel’s “Giulio Cesare in Egitto” with Susanna Phillips, who gave an unforgettable performance last year in “Agrippina,” as Cleopatra. I can hardly wait.