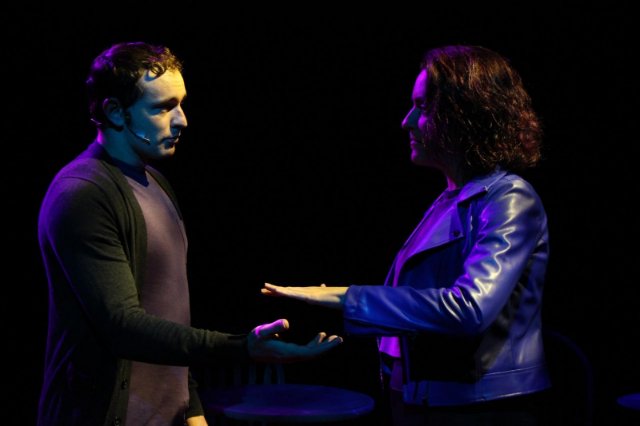 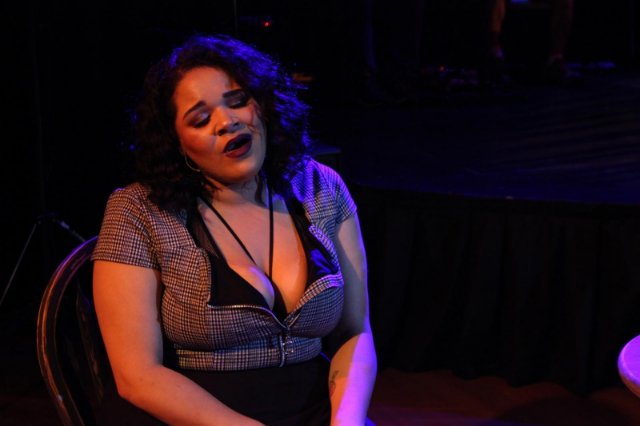 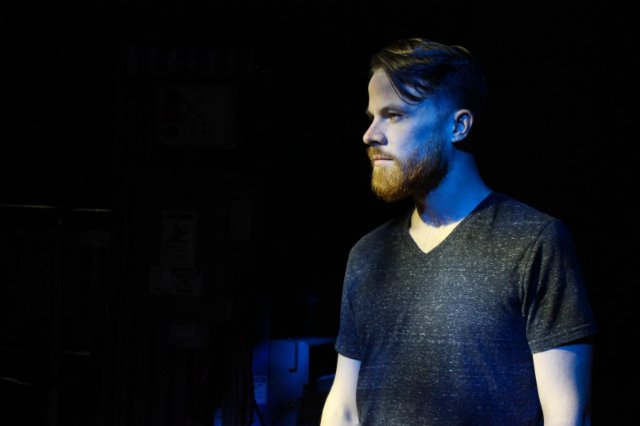 Every once in a while, you hear about a husband and wife who’ve experienced many decades of uninterrupted marital bliss.

Certainly, the dark and even deadly side of dating and mating slices through the Off-Broadway rock opera sensation Murder Ballad.

This captivating, sung-thru show is receiving an engrossing, immersive and intense, but not flawless production by Measure for Measure Theatre in the Broward Center for the Arts’ intimate Abdo New River Room.

Chances are, this is not the type of traditional theatrical experience to which you are accustomed.

Patrons sit at numbered, candlelit round tables. This ambiance reinforces the often-romantic action taking place onstage. However, one should consider the entire room “onstage.”

If audience members are brave enough, they choose to wear a band alerting performers that they don’t mind partaking in the action. So, if you’re the shy type, you probably don’t want a cast member flirting with you.

But make no mistake. What transpires in this tale could easily happen to you or someone you know or love, this show seems to say.

While some may view Murder Ballad as a precautionary tale, it is hardly a preachy one trying to pound home a message.

This show, by award winning writer Julia Jordan as well as composer/lyricist Juliana Nash, is a delight. It’s unpredictable, fast-paced, dark and intriguing.

Yes, there’s a gruesome murder. But if you’re the queasy type, rest assured that Murder Ballad is hardly Titus Andronicus, Sweeney Todd: The Demon Barber of Fleet Street or Grand Guignol. Moreover, Matherson and Co. don’t come close to presenting this production in such a manner. In fact, the closest thing resembling blood is the red-bathed stage, courtesy of lighting designer Clifford Spulock.

Think of this show as a poor man’s (or woman’s) Chicago without the infamy, memorable songs or as strong a story.

Even so, Jordan and Nash, and Matherson in this production, have given us a tale that is, at turns, sultry, sympathetic and sincere as well as hard-charging. These are apt adjectives to describe the score, which includes rock numbers and ballads. They set to music lyrics that are at times evocative. Sometimes, though, the lyrics are repetitive and they are not always MeToo friendly.

Love and murder commingle around a romantic triangle that turns deadly.

In particular, Sara is an uptown Manhattan young woman. She is torn between her past relationship with Tom, a shady downtown bartender and Michael. The latter is a more polished NYU poetry student whom she weds and with whom she has a baby.

Postpartum depression, a longing for the past, betrayal and romantic complications swirl uncomfortably around the characters.

Even when Sara and Michael are seemingly happily married, tensions threaten to break them apart. As Shakespeare wrote, “The course of true love never did run smooth. True love always encounters difficulties.”

Speaking of tension, the air is thick with it as Tom and Michael vie for Sara.

To his credit, Matherson knows when to ratchet up suspense. In addition, he emphasizes tenderness, steaminess, vulnerability and unbridled, hard-core, almost primitive sexuality when the show calls for each of these.

Further, Matherson and Co. keep the action unpredictable. Specifically, you never know where an actor is standing, sitting or lying. In fact, (s)he could be right next to you. Therefore, make sure you’re alert to avoid the performer startling you.

The performers possess strong, expressive voices. Unfortunately, lyrics are sometimes hard to decipher. This is due either to sound issues or the four-piece band drowning the singers out. Even so, you can clearly grasp the emotions these characters are feeling. This is a credit to strong emoting from the quartet of performers.

Award-winning actor Sabrina Lynn Gore embodies a Sara filled with compassion, spunk and spirit. Of course, that is when Sara isn’t despairing after having her baby daughter. When Sara is depressed, Gore makes sure we sense that. Pain and anguish clearly register in her long face. In a natural manner, she deep breathes, as though trying to control her emotions and feel better.

Still, O’Keefe’s Tom often becomes beast-like. For instance, he aggressively crawls toward Sara. Moreover, their kissing is passionate. Also, when they touch, it’s hardly caressing. Instead, they practically grope one another. Clearly, their sexuality takes on a primitive quality.

Tom and Sara’s intimacy represents a stark contrast to the loving, tender and gentleness between Sara and Michael (a soft-hearted, compassionate and passionate Christopher J. Alvarez, blessed with an expressive face). His Michael turns into a fierce competitor when he must fight for Sara against Tom.

Then there’s the mysterious narrator. Nikki Dikun sings her with a commanding, sultry presence. This performer owns the stage. Undoubtedly, she is a major reason why this production captivates us, even if we cannot understand some of the lyrics.

The performers sing on a mostly bare stage. But again, the entire cabaret-like room is their playing space.

Lighting designer Spulock expertly paints with his palette of colors. They fittingly include hues which are symbolically appropriate for this show: red and pink representing passion, for instance, and blue for despair and cool intimacy. The lighting also provides focus and intensity. Sometimes, though, performers start singing before light illuminates them.

While the sound design and lighting cues need improvement, this production is an overall strong effort.

By the way, Measure for Measure is the same company that gave us a heartbreaking, powerfully emotional Next to Normal last spring.

Expect quality theater from them for a long time to come.

Measure for Measure Theatre’s production of Murder Ballad runs through April 28 in the Broward Center for the Performing Arts’ Abdo New River Room, 201 SW 5th Ave. in Ft. Lauderdale. General admission is $39.50 (plus taxes and fees). The student (with ID) and industry rate is $25. Tickets and showtimes are available at www.measureformeasuretheatre.com/shows or The Broward Center Box Office at (954) 462-0222.