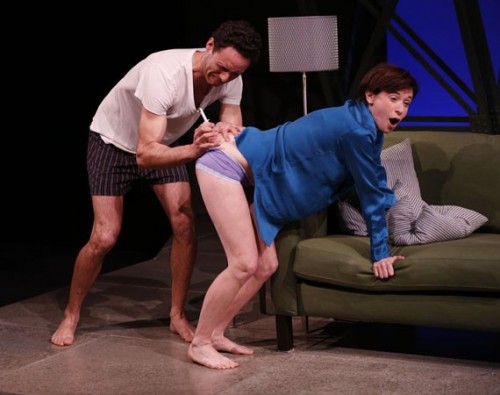 A shot heard around the play. 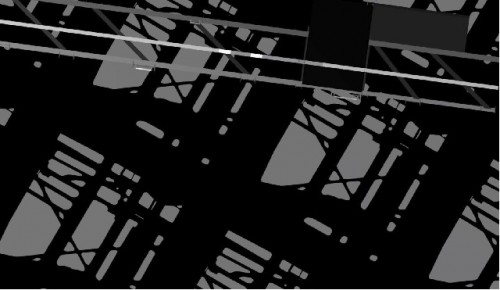 A bridge collapse as metaphor.

The Women’s Project Theater can be counted on for a thoroughly engaging evening of theater.  They do this by tackling the most disturbing and important issues of our time with a novel flair and often high humor.

Only at the end of Collapse do we realize that we have been at the heart of our world today in which the center has trouble holding as we keep turning in an ever widening gyre.

This idea creeps up through the twists and turns of a good woman, Hannah, who is struggling to help her husband.  He fell into the Mississippi River in his car when the Route 35 Bridge collapsed in Minneapolis on August 1, 2007.  The blood dimmed tide was loosed then.

Playwright Allison Moore brilliantly holds the seriousness of this situation at bay.  Until the last moments of the play, we laugh at joblessness, homelessness, impotence, infertility, and a drunken plant, nourished with beer.

We first focus on Hannah’s ass, which David has to shoot up with hormones as the couple deploys every tool available to get Hannah pregnant.  Every tool except the most obvious one. Trauma makes sex tough.

As portrayed by Hannah Cabell, the character Hannah is a wonderful mix of kindness and barely suppressed hysteria. Her turn with an impotent sex addict, played with touching cool by Maurice McRae, is a metaphor for all our recovery relationships.

Susan, Hannah’s sister arrives from LA, fresh from the loss of her job with Cable Access, reporting total assets of $22. She got free airfare for carrying a bag for delivery to “Bulldog” in Minneapolis.

David is disturbed by Hannah’s efforts to make him well.  Getting to his sperm delivery appointment is not high on his to-do list. The brilliant actor Elliot Villar is familiar to Williamstown and Huntington audiences.  Here he turns on a dime from a depressed, beer besotted lush to a knight on a white horse. He phones Bulldog to take charge of the drug delivery, rescuing Susan.

Susan now can focus on letting the world come to her and solving her problems.  Nadia Bowers is both blowsy and spiritual.  For a moment you think hers may be the way.  What do we control anyway?  Jackson Gay directs for high humor as well as  pathos.

Having laughed for most of the evening, we are stunned to silence as Hannah and David try to find some small meaning in the chaos whirling around them.

The truss of the bridge hangs over the set, both the living room of Hannah and David’s home, a coffee shop near a Sex Addicts Anonymous meeting, and a park area beneath a bridge. The truss serves to remind David of the fateful late afternoon in August when his car fell into the river as the bridge collapsed.  Strangely the truss feels like both a reminder of what has happened and an ominous caution about the future.

Set designer Lee Savage has done a masterful job with transverse deck beams and deck stringers.  Costume designer Oana Botez stripped down Hannah and David, but gussied up Susan mostly in striking leopard, and Ted is always at his corporate pimped up best.  Lighting by Paul Whitaker and sound by Jill B C Du Boff cap off apt stage elements.

Playwright Moore picked a bridge collapse as a metaphor for the collapse of the world around us.  Seventeen years before the bridge collapsed it was deemed structurally deficient by authorities who noted corrosion in the roller bearings.  Three years later corrosion was discovered in the steel on the trusses.  In 2006 an engineering report said the bridge needed supports but further studies suggested these would cause collapse.  Repair vehicles and supplies added weight to the bridge and helped cause the collapse of the bridge to rubble in 2007.

Lehman Brothers collapse could be told this way.  So too Bear Sterns and all the bundlers of subprime mortgages.  Big banks are leading us down this path again.   Elizabeth Warren warns.  Who is listening?

These heavy insights come almost inadvertently after an evening of rollicking fun.  The Women’s Project Theater is first rate yet again as it presents Allison Moore’s Collapse.