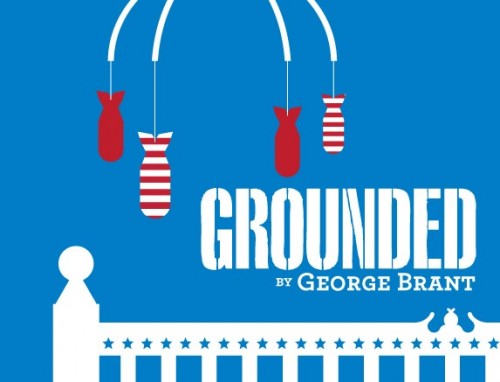 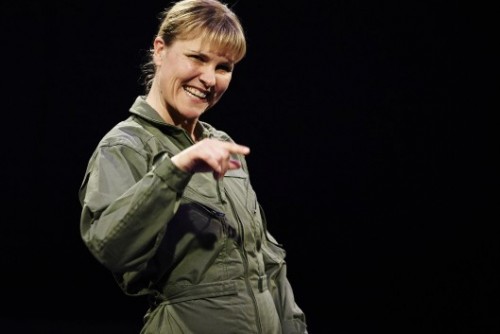 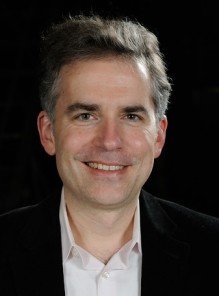 George Brant’s new one-woman play Grounded, at City Theatre Company through May 4 is, on one level, the story of a fighter pilot whose job has changed drastically. The Pilot (Kelly McAndrew), tells us she was born to be “in the blue” at the controls of an F16 fighter jet, dropping bombs on unseen targets and accelerating away before the shells explode.

She’s a member of an elite class of warrior, the kind of “top gun” familiar from the movie of the same name, and she’s in possession of all the high self-esteem and sense of superiority to which membership in that class entitles her. So when pregnancy “grounds” her and eventually leads to a reassignment piloting unmanned aerial vehicles from a trailer outside Las Vegas, a crisis of identity ensues. Is she still a warrior if instead of dominating the sky from the cockpit of one of the world’s fastest planes, she stares at a computer screen and manipulates a joystick for twelve hours a day? Is it really combat if she is never in any kind of danger? And, most fundamentally: what is it to be a soldier who comes “home from the war” to have dinner with her family every evening?

Her personal conflict is only one level of this compelling play, however. For on another level, Grounded is a story about what it means to wage war at a distance: for the soldiers who wage it, for the people in faraway lands who are targets of it, and, by implication, for all of us noncombatants here at home for whom this distant war is (dare I say?) so “comfortably” distant we can almost forget it touches us at all.

The play both underscores and collapses that distance, as The Pilot finds herself at first bored and irritated by the monotony of her task and by her sense of detachment from the action, and then exhilarated and shot through with adrenaline when, via drone, she finally attacks and destroys a “target” (a group of “military-age males”). Now she’s a “god” of the sky, identifying the guilty and executing them on the spot, and her hubris implicates us, the noncombatant audience, as “gods” too (after all, we – as taxpayers, as citizens of the US – are collectively responsible for the existence and deployment of drones, whether we as individuals support their use or not).

Such dissociation is not healthy for the soldier who must maintain it: targeting enemies as a bureaucratic “nine-to-five” job starts to play psychological havoc on the The Pilot as she struggles to maintain boundaries between her military work and her civilian life on a daily basis. The play’s final plot turn is a tad hard to swallow – involving, it turns out, a senior officer “testing” her ability to follow orders even though he has observed that she is breaking down under stress – but overall its insights into the psychological, ethical, and social implications of war-by-proxy are keenly and astutely observed, and make for a riveting hour of theater.

Kelly McAndrew is perfectly cast as the Pilot – she wears the persona of the tough, self-congratulatory elite soldier like a second skin, skillfully peeling it back on occasion to reveal the layers of complexity that make up the character. Brant has woven a lot of humor into this otherwise serious play, and in her delivery McAndrew expertly brings out the comedy. The play is in the round, which is always worrisome for an audience member, but director Jenn Thompson has staged the action so that you never feel like you’ve missed something, even when McAndrew has her back to you.

Anne Mundell’s simple, spare set also serves as a screen to Larry Shea’s apposite projection design, which demonstrates at once how strangely mystifying and utterly tedious war-via-computer screen must be. The images – gray, repetitive, and often shot through with what look like signal distortions and white noise – help highlight the enormous discrepancy between what it must be to fly an F16 bomber in an expansive blue sky and what it is to be delimited in one’s field of vision by the lens of a camera embedded in the belly of a drone. They also help underline one of the play’s side points, which is that there are eyes everywhere nowadays, each with their own “gods” (of national security, of commerce, of local policing) behind them, and that we reassure ourselves of being “comfortably” distant from the consequences of war at our own great peril.

Reposted courtesy of Wendy Arons and The Pittsburg Tatler.