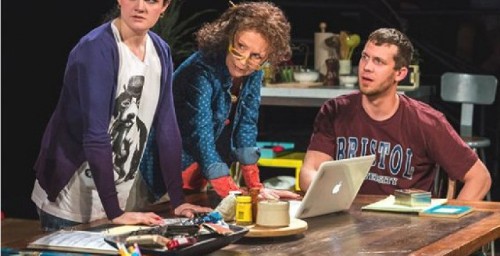 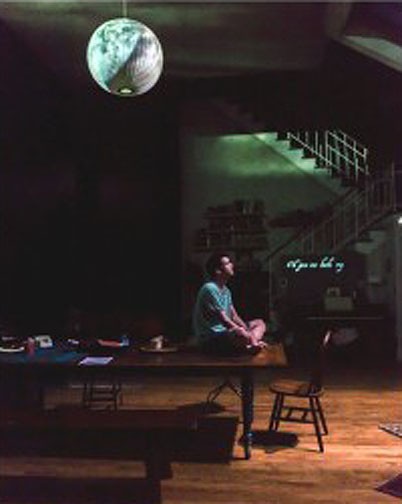 Will Brill in a contemplative moment. 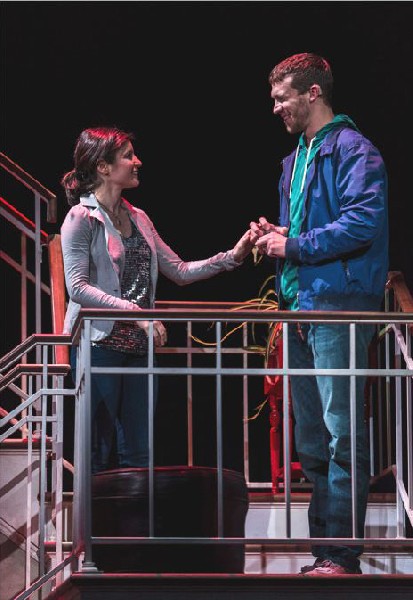 Romance blooms in a comedy/drama.

The new Nina Raines comedy/ drama raises some interesting communication issues concerning the Deaf community. The debate whether to downplay the role of American Sign Language (ASL), and those who lip-read or do both, versus the intervention of science and cochlear implementation surgery into their “silent world”, is not only a thorny issue for both proponents, it’s a game-changing threat to long standing social and familial relationships.

“Tribes”, currently onstage at the Mark Taper Forum in LA, is insightfully directed by David Cromer and brings into much sharper focus the issue and the debate of how one copes within a family of hearing parents along with hearing and non-hearing siblings.  This is not the first play to address and/or grapple with the issue.   “Children of a Lesser God” for example, was a splendid play that saw Marlee Matlin performing in both the stage and movie versions.  The Oscar-winning deaf actor somewhat championed the cause for maintaining the status quo (signing as her communication mode of choice).  To sign, or not to sign, might become a new rallying cry for future deaf communities to consider.  Raines, Cromer and the very talented cast of “Tribes”, passionately examine this loaded subject.

The story pivots around a dysfunctional family of writers and artists:  Billy, the deaf older son (the sensational real-life deaf actor Russell, Harvard) of hearing parents Christopher (Jeff Still) and Beth (Lee Roy Rogers), and Billy’s two hearing siblings Ruth (Meghan Mae O’Neill) and Daniel (a caring firebrand Will Brill).  Chris and Beth have raised Billy, not as a deaf child, but as a hearing son.  One night, after dinner, Billy, goes to a local bar where he literally bumps into Sylvia (Susan Pourfar).  Sylvia is an independent, deaf woman who reads lips, signs, and speaks, and is fully functional in the  business world and society.  As two kindred spirits Billy and Sylvia are attracted to one another. Their accidental meeting sets in motion a budding romance.  They are both deaf, and also sign, read lips and speak.  One evening Billy invites Sylvia home for dinner with his family.  Naturally, the dinner table conversation drifts to deaf people and their place in a society that can restore hearing to many.  Chris is brutally frank in his opinions, which Sylvia tactfully challenges.  At first, Daniel sides with his father only to switch later on.  Ruth leans toward supporting the opinions of Sylvia and Billy, while their mother Beth is non-commital.   It’s an evening of disputation conversations worthy of Talmudic scholars.

It’s also an evening that suggests there are new ways of assimilating the deaf community into the larger fabric of society.  That might appear as a positive to a hearing society, but such a move to the deaf community is viewed as a solution that is fraught with danger and a loss of something they hold very dear – the safety and comfort zone of exclusivity.  The position, although not the same, sort of reminded me of the plight of French speaking Quebecois and their desire not to lose their language and their culture to their more numerous English-speaking brethren.

Harvard is compelling as Billy, a man on the brink of a breakout from one comfortable zone to a life he may one day regret.  Still and Rogers portray sympathetic and caring parents who believe they took the correct path in their decision to raise Billy as a hearing son.  Speaking of hearing and understanding words as a means of communicating, parents might want to leave grandma and the kiddies at home for this one.  There are at least 50 f-bombs hurled from the stage, and they’re all adjectives.  Then again, repetitive f-bombs may just lose their power to shock, forcing playwrights to go back to writing dialogue and expanding their vocabulary choices.

Brill, O’Neill, and Pourfar are also solid in this well acted and well paced ensemble drama.  Cromer infuses his play with many clever directorial touches and creative traffic management solutions for the six actors when it comes to the multi-level set on the Taper’s thrust stage.

The technical credits are always a strong element at The Taper, and this production is no exception.  This passionate production led by director Cromer and his creative team, serve up a functional one set, multi-level space by Scenic Designer Scott Pask, that is creatively lighted by designer Keith Parham.

The debate concerning technology vs. tradition when it comes to the deaf community, however, is still with us.  Join the debate, but first make sure you see “Tribes” at the Mark Taper Forum.  It runs through April 14, 2013.