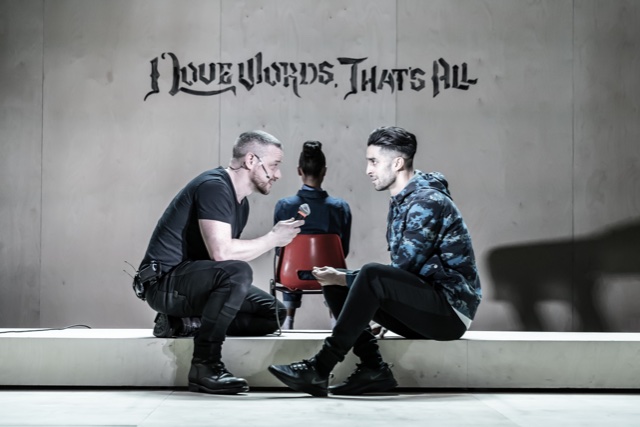 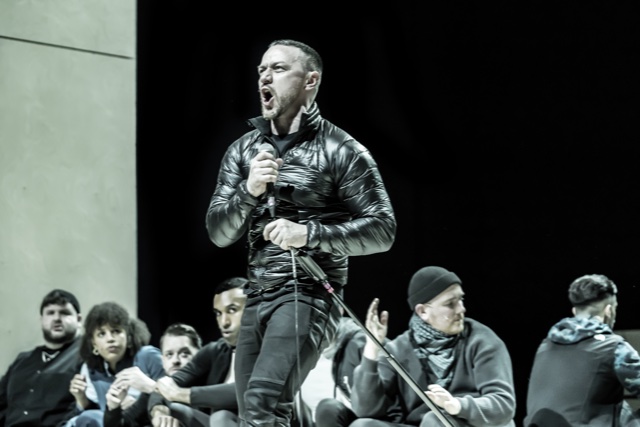 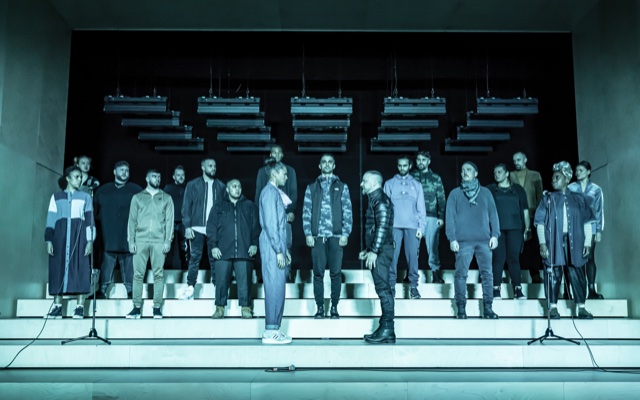 In the beginning was the word, said John in the Bible. This was also said about Cyrano de Bergerac. Jamie  Lloyd and James McAvoy follow up with a version of Edmund Rostand’s play which celebrates the word as it is spoken today. No longer does it depend on a continuously mellifluous voice.

"I love words, that’s all,"  says James McAvoy as Cyrano. And it is because the word can express deep emotion and be called into the service of its expression that plays like Edmund Rostand’s Cyrano de Bergerac came to be. Even Cyrano's gargantuan nose will now be made of words.

James McAvoy has often worked with Lloyd. Emlia Clarke and Jessica Chastain are waiting in the wings. Actors seek out this director.

The bold decision to eliminate the big nose, which becomes a fixation in movies with Jose Ferrer and Gerard Depardieu, as well as classic stage productions, turns out to be brilliant.  Now we focus on Cyrano’s heart and on Cyrano the wordsmith.  "That is what I love, the word," is calligraphed on the wall. The nose has an active role as articulated by words. It precedes the rest of the baby's body as Cyrano passes out of the womb. It may be used in sexual foreplay, or in sex. Contemplating its many uses allows Cyrano respite from the hard fact that no woman has ever looked at him with lust in her eyes.

The kind of words Cyrano writes to Roxane, and speaks to her in hr lover Christian’s stead, are fading from our current world.  McAvoy speaks them in a whisper. Roxane responds in kind.

Big bold words of rap echo through the hall.  They tell the tale, but in the terms familiar to a current audience.  They are fun, telling and representative.  Yet their quality is quite different: in your face instead of wrapping your soul.  McAvoy pulls them off too.

We get a taste of Cardinal Richelieu, ruthless censor of the word. Words also create hand-to-hand combat.

The director Jamie Lloyd keeps the set bare. A game of Word Chairs is played, as lead actors turn from us and toward us and run around the seats before they sit. The microphones used to blast out sound when rap rhythms abound, are weaponized for the sword fights in which our hero engages. The only props refer to words and emphasize their importance. The stage is full of action during duals as well as in big battles.

McAvoy’s postures are eye-catching. He can become suddenly bow-legged and ferocious.  He has a way of straightening his legs as he storms across the stage threateningly.

Roxane (Evelyn Miller) is lovely, but also feisty.  Her reaction to Cyrano’s deception is not tender, but full of fury, a modern woman’s stance for sure.

Christian (Eben Figueiredo) is a handsome wimp, fearful of the consequences of the deception Cyrano has encouraged him to undertake. In the end, in a surprise gesture, he shows us just how much he appreciates the words he does not know how to use.

Lighting is a character, not simply a mood changer.  Spots are used to focus us on crucial moments. Blackness can envelop.  A bank of 28 frames hangs over the stage, sometimes near the action, and at others, at a distance.

Rush seats are portable legless chairs. Lucky audience members stretch their legs out toward the stage of which they’re a part.  Looking up at actors close at hand is exciting.  Not a whisper or a cell light blinks in the rest of the audience. They are rapt.

Martin Crimp has a gift for making the past present.  No one comes away from his opera Written on the Skin without the taste of a human heart hanging heavy. In Cyrano we come to feel words that make up the human heart. The cruel tyranny of appearance over the treasures of the soul is evident everywhere, as both noses and swords are thrust.

A terrific evening of theater.  At the Harvey BAM in Brooklyn through May 22. Tickets here.