Jean-Yves Thibaudet at the Piano 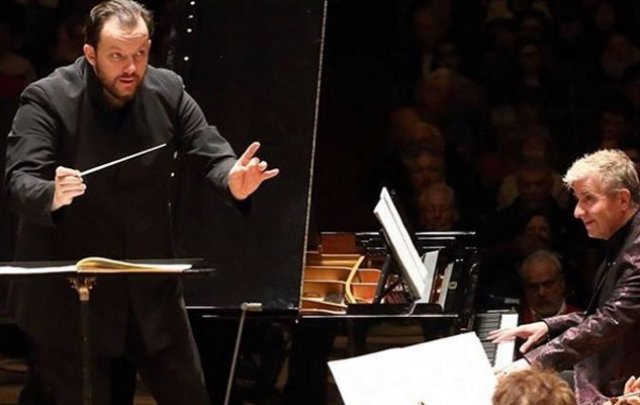 Boston Symphony Comes to Carnegie
The Boston Symphony Orchestra is flourishing under the leadership of music director Andris Nelsons. Ensemble and music director arrived at Carnegie Hall on Wednesday night for the first of three concerts this week, fulfilling their yearly obligation to visit that historic stage and offering New Yorkers a sample of the interesting new directions pursued by this brave and ambitious conductor.

This first program offered a pair of  difficult 20th century symphonies. First up was Leonard Bernstein's Symphony No. 2, subtitled The Age of Anxiety after the poem of the same name by W. H. Auden. This work pits a solo pianist (in this case current BSO artist-in-residence Jean-Yves Thibaudet) against large symphony orchestra but bears little structural resemblance to a conventional concerto. It is an ambitious, freewheeling work combining all the Bernstein influences: jazz, Latin music, and of course the angst-driven chromaticism of Mahler.

Nelsons laid a strong groundwork for the entrance of Mr. Thibaudet, a virtuoso of dazzle, flash and panache who has made this thorny work a specialty in recent seasons. The pianist did not disappoint, moving from conventional thematic statements to go-for-broke passages where he tapped out frantic cardiograph rhythms as the orchestra raced to keep up. The expansive structure of the first movement did not need the accompanying Auden poem to make itself understood.

The second half of this piece is even wilder, including elaborate orchestral passages, ostinato rhythms and a section where Mr. Thibaudet labored against the minimal background of one plucked double bass, a celesta and a percussionist. This unconventional, jazzy music captures the loneliness and despair that is endemic to the Auden poem. Only a hopeful, minor key dawn in the woodwinds hinted at some optimistic fate for humanity, a Bernstein characteristic.

The Symphony No. 4 in C minor by Dmitri Shostakovich offers no such optimism to the listener. In fact, this extraordinary work has been overshadowed by its own legend, and audiences who may be familiar with the history (Shostakovich was forced to withdraw the work and make a groveling apology for it after he was slimed on the front page of Pravda by Stalin's people after the Soviet dictator was displeased by his opera Lady Macbeth of the Mtsensk District) are missing the powerful, original vision that bursts from its pages. The composer kept the work locked in a drawer until 1961, when the political climate in Russia was finally cooler. This saved his life, but relegated the Fourth to second-tier status.

This is the largest and most challenging of Shostakovich's instrumental works. More sardonic that the Eighth and much more complex than the Fifth or Seventh, it finds the composer at the height of his powers, exploring a new palette of ideas where fierce waltzes are juxtaposed with harsh, pounding marches, where the orchestra breathes and heaves like a sobbing mother one moment before dancing away laughing the next, and where the structural boundaries of the symphony, expanded on by Mahler, Schoenberg and Webern were almost completely shattered beyond recognition.

Nelsons, who is currently recording a complete cycle of the fifteen Shostakovich symphonies for DG, showed his fearlessness and expertise. He demanded everything from his players in the exhausting first movement, a screeching, jolting fun-house ride that has enough thematic ideas for six other symphonies. (Shostakovich would carefully recycle the leitmotifs from this work into the more famous Fifth.) The eerie middle movement, a slender fuselage between the big wings of the two outer movements, soared on waltz rhythms before hitting orchestral turbulence. The finale, a two-part journey into despair and darkness took the listener on an Orphic visit to a musical underworld where no deity or ferryman offered the possibility of redemption or return. In the Soviet Union, one did not believe in such things.