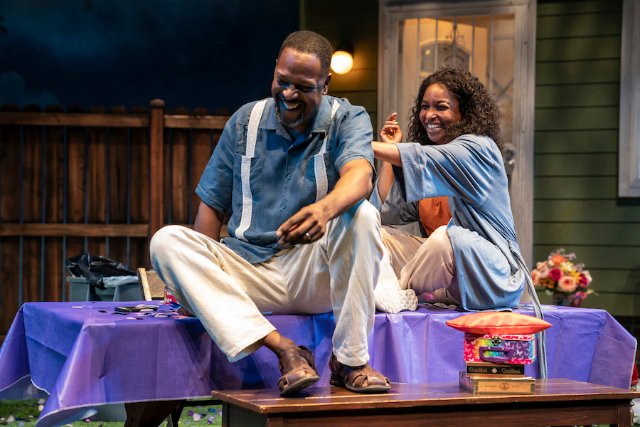 Avery (Meredith) and Mallory (Brooks) chill out after the party. Photo by Liz Lauren. 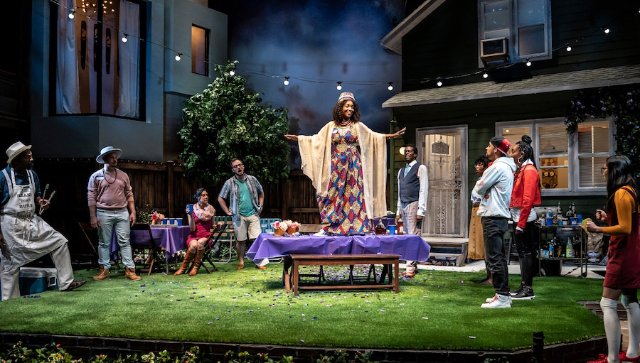 Lottery Day is a party with a guest list of nine. Mallory (a sizzling J. Nicole Brooks) has invited them to her back yard to celebrate, but no one knows what the occasion is. With a rich and complex web of characters, Ike Holter’s play at Goodman Theatre brings together the threads from the other plays in his seven-part Rightlynd Saga. Skillfully directed and choreographed by Lili-Anne Brown (with Breon Arzell as assistant director), Lottery Day reminds us that Rightlynd, Chicago’s fictional 51st ward, is all about what’s right and wrong with our city. Our mayor-elect and other members of our administration should head down to now before their first council meeting.

Skillfully directed and choreographed by Lili-Anne Brown (with Breon Arzell as assistant director), Lottery Day reminds us that Rightlynd, Chicago’s fictional 51st ward, is all about what’s right and wrong with our city. Our mayor-elect and other members of our administration should head down to now before their first council meeting.

Mallory is a glamorous, bold and brassy host but we meet her first as she prepares for the party. She’s not glamorous yet but she’s full of grit then too. She jokes with her friend Avery (James Vincent Meredith), the grill man (there’s one in every family), who has started his daylong session with a vast assortment of red meat. Cassandra (McKenzie Chinn) arrives early to discuss a financial matter—the result of a family tragedy that Mallory refuses to name, let alone discuss. But it is the reason for the party.

Later, the other guests arrive and Mallory disappears to dress for the party. It’s clear they’re not all blood relatives, yet there’s a strong family feeling among the group. The party progresses, as parties do, in conversational pairs and group discussions and debates about the host and neighborhood issues. The overlapping conversations are high-speed and sometimes hard to follow (I heard several comments about this at intermission). Although it’s sometimes hard for audience members to keep up, the gist of the story is clear.

It’s Rightlynd, after all, a gentrifying neighborhood, where the old and the new clash on sidewalk and storefront. Mallory’s large house, the site of many past celebrations, is the last one on a block that’s being “revitalized.” Representing that trend is neighbor Vivien (Michele Vasquez) whose next-door home is a modern slab with floor-to-ceiling windows.

Tori (Aurora Adachi-Winter) is busily organizing everyone, including handing out name tags. You’ll remember her as the hyper-organized stage manager in Holter’s Red Rex, recently at Steep Theatre. Nunley (Tony Santiago), proprietor of a Rightlynd store that he’s trying to keep going, pulls in a thread from The Wolf at the End of the Block, the Holter play staged by Teatro Vista. Both Zora (Sydney Charles) and Robinson (Robert Cornelius) have a connection to Rightlynd, the first play in the saga. Tommy Rivera-Vega plays Ezekiel, a wannabe rapper and poet, with the necessary high energy.

When Mallory appears, now made up, gowned and glamorous, the party takes on a new intensity. She announces the purpose of the party, which involves the guests making discoveries around the garden; it will be the first of three competitions to determine who wins “a whole bunch of money.” A “live intermission” ensues, during which the conversations and searches proceed and audience members come and go.

ROBINSON–What good’s sticking around somewhere that’s barely even there any more.
RICKY — I blame the city.
ROBINSON — And the mayor. And that piece of shit Alderman, / ok, don’t get me started
RICKY — She is such a piece of shit
RICKY and ROBINSON — Fuck Nina Esposito!

(And that’s a link back to Rightlynd, the first play in the saga, in which Esposito is elected alderman in a clean-up-the-ward campaign but by the end of the play in 2014, she turns out to be as corrupt as any of her predecessors.)

How much money can Mallory be talking about, someone asks. And Nunley replies, “That woman right there? The woman has raised half the people in this backyard. Ran this entire block. This shit? This shit is not a game. She throws down, she’s not fucking around…so whatever it is? From her? It’ll be enough.” But not everyone wins in the end.

Holter embeds character traits, language and hints of events from his six other plays in Lottery Day. The Rightlynd Saga is surely one of the most ambitious theater projects has seen. And its Chicago-ness is intensified because five of the seven plays have been produced by smaller storefront theaters. (Exit Strategy, the first produced, was staged by Jackalope Theatre in 2014. Sender and Prowess were produced by A Red Orchid Theatre and Jackalope respectively in 2016. The fourth play, The Wolf at the End of the Block, was staged by Teatro Vista in 2017. In 2018, Rightlynd, which begins the saga, was produced by and Red Rex by Steep Theatre.)

This question looms as we consider this brilliant homage to grit, greed and corruption. What is the future of the Rightlynd Saga? We look forward to finding out where the career of the talented Ike Holter goes next.

Lottery Day’s backyard set design is by Arnel Sancianco, with lighting by Jason Lynch and sound design by Andre Pluess. Costumes are by Samantha C. Jones. The play runs about 2 hours and 15 minutes, including that live intermission.