Ross Moffett from the Permanent Collection 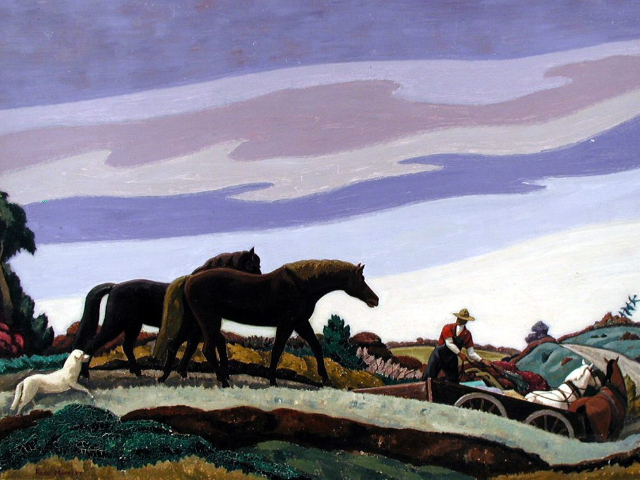 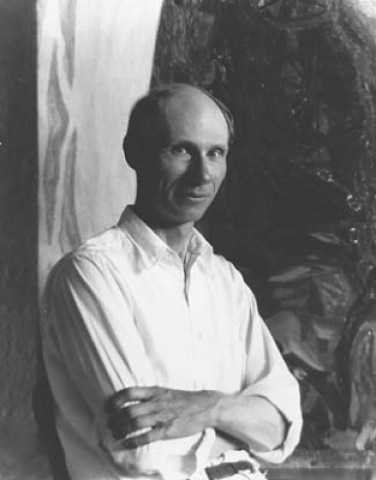 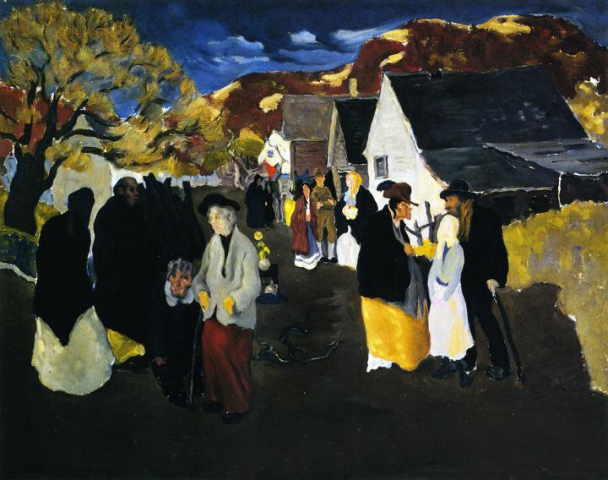 The fluid brushwork of Back Street evokes Dickinson. 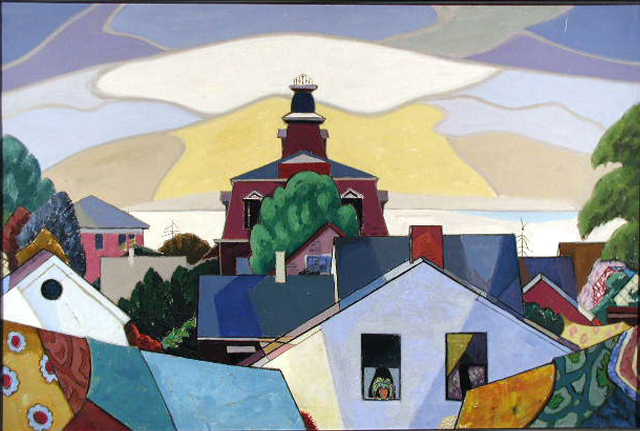 A view of buildings in the precisionist style. 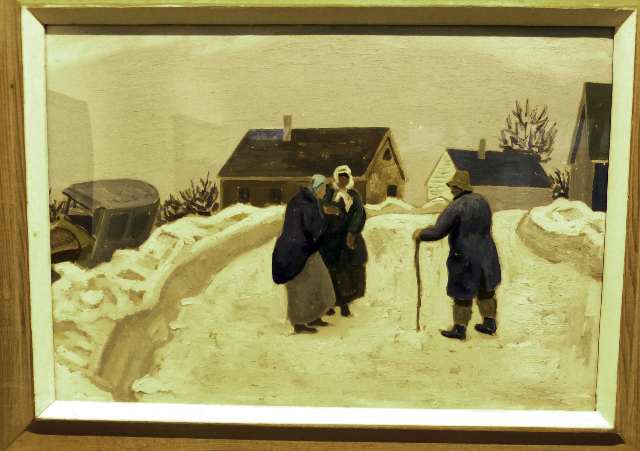 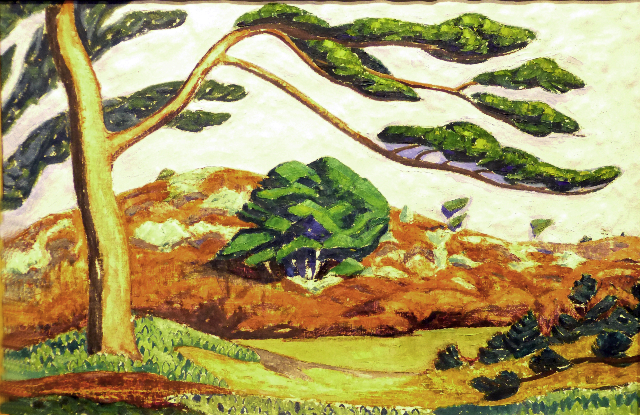 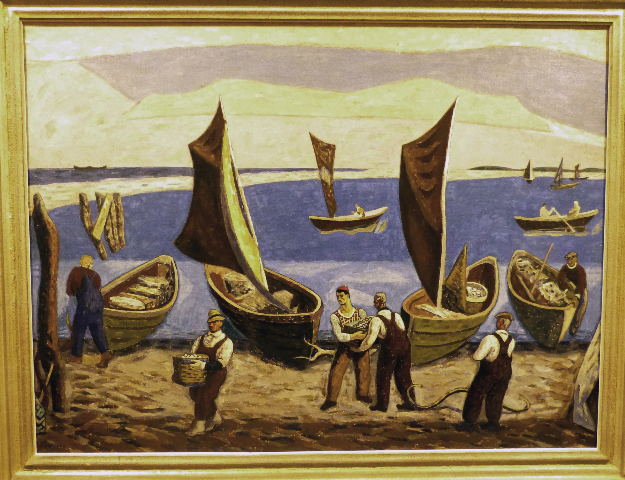 Fishermen on the beach unloading the daily catch. 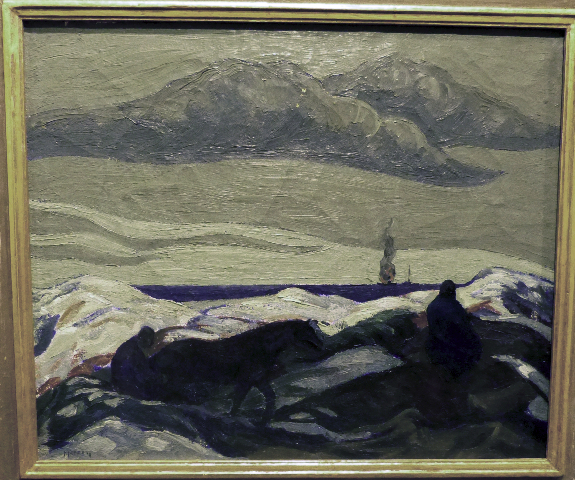 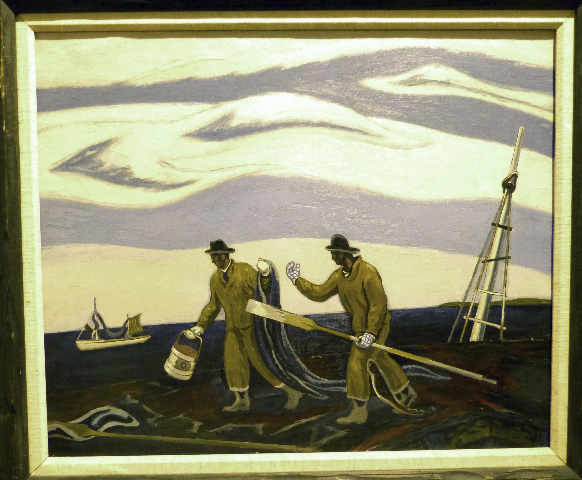 He often depicted fishermen at work. 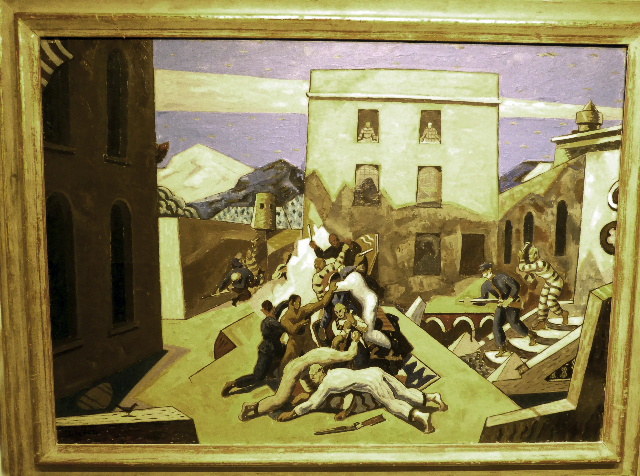 Prison Riot seemed out of sync with this exhibition .

Mural painting (not in the exhibition)

Study for a possible mural.

In 1899 Charles Hawthorne established the Cape Cod School of Art in Provincetown. In the summer of 1913 Ross Moffett (1888 to 1971) came to study with him. Moffett was born in Iowa and began his studies at the Cummins Art School of Des Moines in 1907.  In 1908, he transferred to the Chicago Academy of Fine Arts (now known as the Art Institute of Chicago) and studied with John Vanderpool and Harry Wallcott.

During the years of WWI many expatriates relocated from Paris with a number of them settling in Provincetown. The Portuguese fishing village at the tip of Cape Cod, with bright clear light, evoked the ambiance, affordable lifestyle, and social tolerance that most closely resembled their adventures abroad.

In 1914, Moffett continued his studies at the Art Students League of New York, returning to Provincetown to establish his career as an artist in 1915.

Over the subsequent decades, with Edwin Dickinson and Karl Knaths, he was a part of the triumvirate of leading Provincetown artists of their generation through the Depression years and the end of WWII. After the war many young artists took advantage of the GI Bill to study with the German born artist, Hans Hofmann.

A tipping point and paradigm shift in American Art was hashed out and debated in the summer long Forum ’49. It was the decisive moment when the hegemony of advanced art transferred from the School of Paris to New York. During high season Provincetown was a matrix for many of America’s emerging artists.

Today Moffett is best known as the author of the first history of art in Provincetown “Art in Narrow Streets” published in 1964. It is an invaluable resource for critics and scholars.

Relatively little critical attention had focused on the work of the artist. Of the triumvirate Dickinson continues to be studied and collected, Knaths to a lesser degree, and Moffett the least of the three.

The current exhibition Ross Moffett from the Permanent Collection is my first exposure to the work in any depth. Based on what PAAM has been able to acquire, rather than a retrospective with loans from other collections, it provides tantalizing glimpses of the oeuvre rather than a scholarly overview.

The essay for the exhibition states in part that after military service he stayed in Europe returning to reside in Provincetown in 1924.  “Moffett had his first one-man show at the Frank Rehn Gallery in New York and at The Art Institute of Chicago in 1928.  Between 1932 and 1933, he taught at the University of Miami in Ohio and, in 1942, Moffett became a full member of the National Academy of Design.  Moffett painted four murals in two Massachusetts post offices for the Federal Works Progress Administration (WPA) between 1936 and 1938.

“Moffett became interested in archaeology in the 1950s, delivered a few lectures on the subject, and wrote an article for American Antiquity entitled ‘A Shell Heap Site on Griffin Island, Wellfleet, Massachusetts’ which appeared in Volume 28 No 1.  In 1954, he was chosen, along with another artist, to paint murals of President Dwight D. Eisenhower’s civilian life for the new Eisenhower Memorial Foundation Museum by the National Academy of Design.”

The prevailing impression is of the narrative, stylized approach of the Regionalists of the Depression era and artists of the American Scene. To a lesser degree one senses the manner of Thomas Hart Benton who was an instructor at the Art Students League. Some of the smaller and more simple painting, based on local genre subjects, bear an uncanny resemblance to the few works by Jackson Pollock that survive from his time as a student of Benton.

Like Knaths, Moffett also found work through the WPA’s mural project. On line I found an example of this activity, a descriptive battle scene. This is consistent with the kind of subjects with patriotic themes commissioned for post offices, libraries and schools. There is a narrow, horizontal painting in the current exhibition, based on Provincetown life, that seems to be a study for a mural project.

While many of the works in this small survey have the undulating, wavy contours and soft edges of the Benton school, there are also some crisp, hard edge paintings of buildings that evoke the approach of the precisionists Charles Demuth and Charles Sheeler.

Some of the most interesting works evoke village life. The most intriguing is “Back Street.” It depicts local people out and about. A woman is holding by the hand a smaller person who appears to be a deformed adult rather than a child. Surely it is based on actual residents and would be an interesting picture to research. It also is close in style and context to the early works of Dickinson which similarly were loosely and fluidly painted with tones of low chroma and value. This is arguably the most poetic painting in the exhibition and it entices us to know if there are more of these paintings.

A truly oddball painting “Prison Riot” is literally separated from the main body of the exhibition. It is hung on a short wall that connects galleries. There was confined space not allowing us to step back and get a better and longer look.

Given the overall consistency of the works on view this placement of an eccentric piece conveys that the curator didn’t quite know what to do with it. The compelling subject matter raises intriguing questions as to what inspired this departure from the norm.

There were also a number of monotypes largely of figures and themes based on life in the fishing village. I did not see an example of the white line woodblocks which were common among Provncetown artists of his generation.

The genre subjects evoke the symbiotic relationship between the traditional fishing community and artists living with and inspired by them. I much enjoyed the fishing scenes and dark paintings of Provincetown in winter with ice and snow. It also conveys that Moffett was not just a summer visitor.