On View at Clark Art Institute to September 8 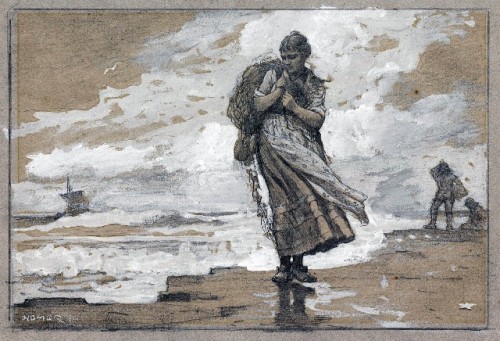 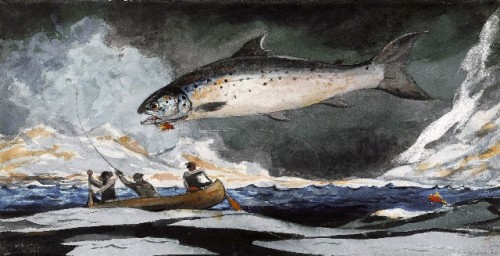 The greatest collection of works by Winslow (Homer American, 1836–1910) ever assembled by one person since the artist's death—and one of the leading collections of any art museum in the United States—will be featured this summer at the Sterling and Francine Clark Art Institute. Winslow Homer: Making Art, Making History explores the artist’s career with a special focus on his role in chronicling scenes of American life.

The exhibition is complemented by the first complete catalogue of the Clark’s Homer collection, Winslow Homer: The Clark Collection, authored by Homer scholar and exhibition curator Marc Simpson. Simpson examines Sterling Clark’s decades-long pursuit of Homer’s works and his passion for creating what is now one of the most important collections of the artist’s work.

“Sterling Clark considered Winslow Homer one of the greatest artists of the nineteenth century,” said Michael Conforti, director of the Clark, noting that Clark purchased his first Homer painting in 1915 at a time when he was living in Paris and focusing on purchasing Italian Renaissance art. “From that moment on, he maintained a passion for the artist throughout his collecting career, creating an archive so rich and varied that it provides us with a unique foundation upon which to build this consideration of the many sides of Winslow Homer.”

On view June 9 through September 8, 2013, Winslow Homer: Making Art, Making History showcases some sixty oil paintings, watercolors, drawings, and etchings, as well as approximately 120 rarely seen wood engravings. Drawing upon the resources of the Clark’s own holdings of nearly 250 works by Homer (dating from 1857 to 1904), the exhibition provides a variety of distinctive perspectives on this important American artist.

“Our visitors will be immersed in Homer’s works, considering his aesthetic achievements in all media, as they examine the changing critical perspectives of his work over the last one hundred and fifty years,” Conforti said.

“Winslow Homer: Making Art, Making History is first and foremost an opportunity to see and enjoy the achievement of this great artist,” said exhibition curator Marc Simpson. “It also explores how Homer's work inspires different stories—about him, his place in the art world, the impact of an expanding art market, and the quest for a national style.”

Winslow Homer: Making Art, Making History presents the full range of the Clark’s Homer collection, including works on paper that are rarely on view due to their light-sensitive nature. In addition to works from the Clark, a selection of loaned works is also presented.

The paintings in the Clark collection are recognized as being among Homer’s finest and offer insight into Homer’s thematic and technical development throughout his career. The presentation of Undertow (1886), along with six preparatory drawings accompanying it, gives an intimate look at the artist’s design process and offers insights into how Homer developed one of his most important figural works.

Among the best-known of the Clark paintings is Two Guides (1877), depicting two identifiable Adirondack guides in the wilderness. Another visitor favorite, West Point, Prout’s Neck (1900) was deemed by the artist in 1901 as “the best thing I have painted.” Panned by one New York critic who called it “simply the worst picture” in that year’s Society of American Artists exhibition, it is now considered by most art historians to be one of his greatest achievements.

The wood engravings included in the exhibition, designed by Homer for such periodicals as Harper’s Weekly and Appleton’s Journal, illustrate news of the day: the Civil War, the rise of various leisure activities, changing fashions, the shifting role of women in society. The transformation of some of these engravings from ephemera to valued artworks is evident throughout the galleries.

Although rarely shown, the Clark’s watercolors by Homer are among the most popular and appealing works in the collection; they help illustrate not only the collecting priorities of founder Sterling Clark, but also the rise of the status of watercolors in the American art world. Highlights include the simple but enigmatic Lemon (1876), the glowing but ominous Adirondack scene An October Day (1889), and the whimsical but powerfully abstract Fish and Butterflies (1900). The Clark’s watercolors are supplemented by Children on a Fence (1874) and Four Boys Bathing (1880) on loan from the Williams College Museum of Art, as well as four works on loan from a New York private collection, including a Key West scene of schooners at anchor.

A group of etchings, heliotypes, and chromolithographs by or after Homer reveals the methods in which the artist used to make his art more accessible to the collecting public. Among the high points of these is the etching Perils of the Sea (1887), which hangs beside the Clark’s watercolor of the same subject from 1881. The exhibition also features some of Homer’s illustrations of popular literature and poetry, including The Courtin’ by James Russell Lowell (1874). Another “marketing strategy” Homer developed was to work up drawings—generally seen as preparatory studies—into finished, saleable works. Two of these fully realized drawings, Fisher Girl with Net (1882) and Schooner at Anchor (1884), are included in the exhibition.

The exhibition is organized by the Sterling and Francine Clark Art Institute and is curated by Marc Simpson, associate director of the Williams College Graduate Program in the History of Art. Winslow Homer: The Clark Collection will be published by the Clark and distributed by Yale University Press in conjunction with the exhibition. More than thirty entries in the catalogue discuss the role of individual works in Homer's oeuvre and their larger significance to the art world. An illustrated checklist provides information on titles, dates, and media for the entire collection.