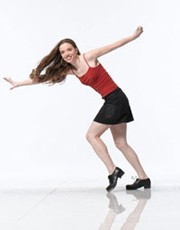 Jacob’s Pillow announces today that Executive and Artistic Director Ella Baff will soon present the seventh annual Jacob’s Pillow Dance Award to Michelle Dorrance, an acclaimed tap dancer, choreographer, and Artistic Director of Dorrance Dance. Praised as a “talented choreographer, the most promising one in tap right now” by Brian Seibert of The New York Times, Dorrance is among the most respected tap performers of her generation.

The Jacob’s Pillow Dance Award honors outstanding, visionary dance artists and carries a prize of $25,000, one of the largest cash awards in the dance industry, to be used by the choreographer to advance their artistry in any way they choose. The Award will be presented in person at the Jacob’s Pillow SeasonOpening Gala on Saturday, June 15. Michelle Dorrance will perform at the Gala with singer Aaron Marcellus. Her ensemble, Dorrance Dance, will perform at this summer’s Festival July 24-28 in the Doris Duke Theatre, accompanied by award-winning singer, musician, and composer Toshi Reagon and band. Past recipients of the Jacob’s Pillow Dance Award include Crystal Pite, Merce Cunningham, and Bill T. Jones; Dorrance is the first tap artist to be honored.

Jacob’s Pillow Executive and Artistic Director Ella Baff comments, “With this year’s Award, we recognize a hugely talented young artist who is experimenting with new ideas and moving the art of tap forward.  We are also honoring the great American art form of tap, which has created some of the best dance and music-making ever.”

"I am truly honored to receive the Jacob's Pillow Dance Award, and humbled to be in the company of such legendary recipients,” comments Dorrance. “This Award allows me the freedom to collaborate with artists who inspire new directions in my work. I am incredibly grateful to Ella Baff and the Pillow for championing tap dance and supporting both its tradition and innovation.”

The Jacob’s Pillow Dance Award was created in 2007 with an ongoing, annual anonymous gift of $50,000, of which $25,000 is given to an artist of exceptional vision. In addition to the cash award, the honoree receives a custom-designed glass sculpture by Berkshire-based artist Tom Patti, whose work is in the collections of the Metropolitan Museum of Art and the Museum of Modern Art in New York, among other prominent institutions worldwide. In 2007, the inaugural Award was given to Annie-B Parson and Paul Lazar, co-directors of Big Dance Theater. In 2008, the Pillow honored Alonzo King, Artistic Director of Alonzo King’s LINES Ballet. In 2009 the Award was given to Merce Cunningham, whose company gave its final performances during his lifetime at Jacob’s Pillow later that season. In 2010, Bill T. Jones accepted the Award weeks after receiving his second Tony Award for the Broadway hit FELA!  In 2011, Crystal Pite, international choreographer and Artistic Director of Kidd Pivot, was honored. Last season, the award was given to Kyle Abraham, dancer, choreographer, and Artistic Director of Abraham.In.Motion. Abraham’s company will return to the Festival in 2013 with the work Pavement August 21-25 and Abraham is also choreographing and performing in the world premiere of Wendy Whelan/Restless Creature at the Pillow on August 14-18.

The additional $25,000 of the anonymous donor’s annual gift supports Jacob’s Pillow commissions, presentations, and the Creative Development Residency Program, which has funded residencies for numerous dance artists including Jean Butler, Kyle Abraham, Camille A. Brown, Suzanne Farrell, Big Dance Theater, zoe | juniper, Stephen Petronio, Kimberly Bartosik, Rashaun Mitchell, and many others. During Creative Development Residencies, artists are invited to spend one to three weeks at the Pillow creating or rehearsing new work, with free housing for the company, unlimited use of studio space, and access to the Pillow’s rare and extensive Archives and other Pillow resources. In the beautiful, retreat-like atmosphere of the Pillow, the Creative Development Residencies are rare opportunities for artists to focus on the creative process without distraction.

Michelle Dorrance, Artistic Director of Dorrance Dance, is lauded as "one of the most imaginative tap choreographers working today” (The New Yorker). A 2012 Princess Grace Award Winner, 2012 Field Dance Fund Recipient, and 2011 Bessie Award Winner, Dorrance is among the world’s most sought after tap performers, teachers, and choreographers today.

Dorrance began her tap dance training at the age of four under Gene Medler, founder and director of the North Carolina Youth Tap Ensemble. She started touring extensively with the company across the U.S. and internationally at age 8 and continued throughout her teenage years. Since relocating to New York in 1997, Dorrance earned a B.F.A. from New York University and has performed with today’s leading tap companies and productions including the New York Cast of the Off-Broadway sensation STOMP, Jazz Tap Ensemble, Tap City on Tour, and was a founding member of Savion Glover’s company TiDii. Notable engagements include the 2002 Winter Olympics, the Opening Ceremonies for the Cannes Film Festival, dancing for the Prince of Monaco at the Nijinsky Awards, the Jerry Lewis Telethon, the Beacon Theatre, The Apollo Theater's 70th Anniversary Concert, and a national commercial for Cingular Wireless. Dorrance serves on the faculty at Broadway Dance Center and has taught at Steps on Broadway, Peridance Center, Duke University, East Carolina University, The Ohio State University, Barnard College, Elon College, as well as many privately-owned studios, national conventions, and festivals.

Dorrance’s choreography and solo work have appeared on stages worldwide and was featured as part of Jacob’s Pillow’s Inside/Out series in 2011, at the Joyce Theatre, The Duke on 42nd St., and at Symphony Space with The New York City Tap Festival. Dorrance was applauded by Claudia La Rocco of The New York Times for her “wonderful comic timing and compellingly syncopated physicality.” Recently, she has been the subject of cover stories for both Dance Magazine and Dance Teacher Magazine. Dorrance Dance will premiere The Blues Project at this summer’s Jacob’s Pillow Dance Festival July 24-28, featuring some of today’s top tap dancers and a live band led by acclaimed musician and composer Toshi Reagon. Dorrance’s first Pillow appearance was with Cintia Chamecki on the Inside/Out series in 2004.