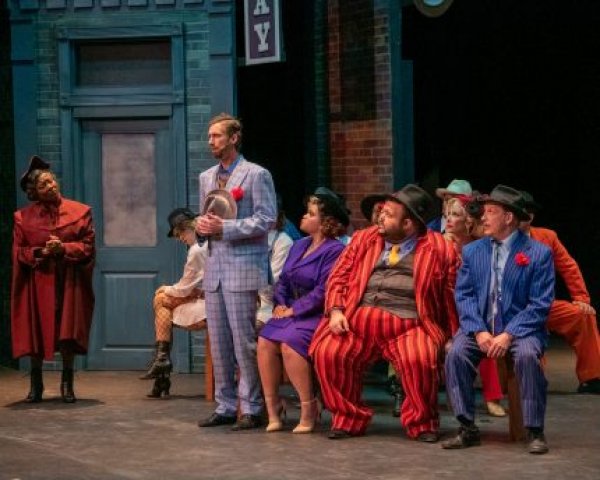 Photo by Amy Pasquantonio Benny Southstreet (Geoffrey Mergele, standing) is about to sing the showstopper, “Sit Down You’re Rocking the Boat” as all eyes are on him. 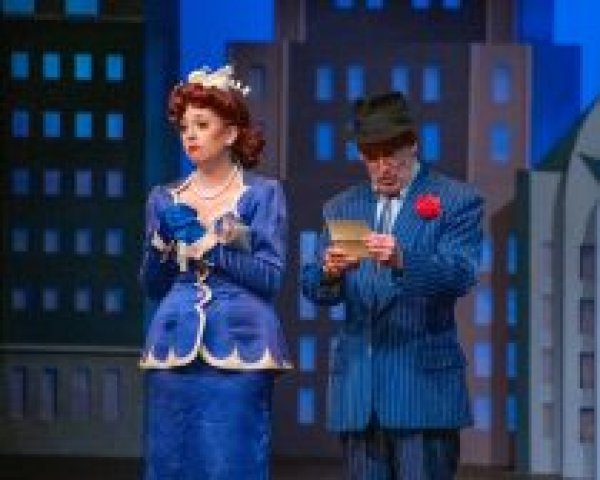 Accurately depicting Damon Runyon’s fantasy world of colorful characters can prove a tough task. In particular, a director and his or her cast must aim for broad comedy without coming across as cartoonish.

To their credit, a talented cast succeeds in several respects with MNM Theatre Company’s production of the classic 1950 romantic musical comedy, Guys and Dolls. Taken as a whole, the production, which runs through April 16 at the Lauderhill Performing Arts Center, achieves mixed results under Jonathan Van Dyke’s direction. Specifically, there are moments when the acting seems too tentative. Further, the attention to detail could be stronger. Also, the lighting decisions are sometimes questionable. And the pacing is sometimes too slow.

MNM Theatre Company is an award-winning, professional, not-for-profit, South Florida group. And, more often than not, MNM delivers high-quality productions. While this is not one of them, there are reasons to cheer. They include a deft balancing act by Leah Sessa as Miss Adelaide, Nathan Detroit’s perpetually sick, not-too-bright, 14-year fiancé.

Specifically, a performer portraying Mrs. Adelaide must appear convincingly ditzy without turning her into a caricature. Sessa succeeds admirably by sincerely playing the character. Therefore, she comes across as a flesh and blood human being with real feelings and emotions. As a result, Sessa’s Miss Adelaide earns laughs, rather than begs for them in songs such as “Adelaide’s Lament.” And, far from coming across as a pathetic victim, Miss Adelaide, in this production, is a strong, respectable woman.

Also, Sessa is one half of a strong duet singing the seemingly female-empowering second-act song, “Marry the Man Today” with Caiti Marlowe. The latter embodies an assertive Sarah Brown, especially during the second act. When the two performers sing “Marry the Man Today” they do so with conviction; the characters refuse to let the men in their lives push them around.

Actually, if you believe the lyrics to the title song in Guys & Dolls, you might question which is really the weaker sex.

The multi award-winning Guys and Dolls, which many believe to the perfect musical-comedy, is certainly a popular show. But for those who are new to it and Runyon’s style, background information may prove helpful.

Runyon (1880-1946) was an American newspaperman and short-story writer. Perhaps people best knew him for his short stories celebrating the world of Broadway in New York City that grew out of the Prohibition era (c. 1920 to 1933).

Runyon told humorous and sentimental tales of characters such as gamblers, hustlers, actors, and gangsters. They prefer colorful monikers instead of traditional names. Hence, Guys and Dolls features such characters as Benny Southstreet, Big Jule, and Harry the Horse. Speaking of Guys and Dolls, its basis is mainly two of Runyon’s stories, “The Idyll of Miss Sarah Brown,” and “Blood Pressure.” Also, the musical borrows characters and story elements from a few other of Runyon’s stories.

“Runyonese” is the term that critics and others use for Runyan’s distinctive vernacular style. It features a mixture of formal speech and colorful slang. Also, words almost always take the present tense. And the style always avoids contractions.

Guys and Dolls takes place in Depression-era Times Square. Within this setting, high-stakes gambler Sky Masterson falls in love with mission worker Sarah Brown. Her goals include converting sinners (i.e. gamblers) into believers. Also in the show, gambler and craps game organizer Nathan Detroit tries to find money to set up the biggest craps game. Meanwhile, authorities pursue him. Detroit hopes to come up with the cash by winning a bet against Masterson. The story takes us from the heart of Depression-era Times Square, (including New York City’s sewers) to Havana, Cuba’s cafes. Since Guys and Dolls is a comedy, everything seems to work out for the best by the end.

This energetic show sets the tone from the beginning. We see a bustling Times Square. Filling it are characters such as sightseeing tourists, teenage girls in bobby socks with autograph books, street vendors selling apples and flowers, a heavyweight prize-fighter with his manager, street hustlers, pickpockets and policemen. However, in MNM’s production, we do not see nearly these many colorful characters. Frankly, just a few of these characters enter the stage at the beginning. And they are not nearly as diverse as the show calls for.

After the introductory scene, Sgt. Sarah Brown and the Mission Band enters while sing and playing a hymn titled “Follow the Fold.” But, the performers do not sing intensely enough. The hymn is a no-nonsense, marching band style attention-grabber. But in this instance, it sounds weak.

As the uptight, passionate Brown, Marlowe is believably tense as the character, rather than seeming nervous as an actor performing. Also, she has a strong, expressive singing voice. But, particularly during parts of the first act, there is a tentativeness to her performance. It seems out of character.

In addition, at the end of the first act, Brown and Masterson sing a duet titled “I’ve Never Been in Love Before.” What is missing is a sense of wonder that comes with falling in love for the first time.

Davis, a tall, imposing actor with a self-assured air, convincingly plays Masterson with a quiet confidence. Later on, Davis imbues Masterson with a palpable, appropriate intensity for the well-known number, “Luck Be a Lady.”

Tommy Paduano, as the appropriately-named Nicely-Nicely Johnson, lends the character a shy, modest quality before singing the show-stopping, “Sit Down, You’re Rocking the Boat.” The performer segues seamlessly into a rousing rendition of the song. Paduano, and other actors, inject the number with the energy it needs.

Paduano, and Geoffrey Mergele as a slick Benny Southstreet, sing the musical’s other showstopper, the title song. The actors perform it with gusto.

Meanwhile, Larry Buzzeo, with just a hint of shadiness, strongly plays Detroit as a flustered, ineffectual, good-hearted individual who cannot seem to stop gambling. Buzzeo is particularly soft-hearted with Detroit’s long-time fiancé, Miss Adelaide. Therefore, it makes sense that she refers to him as “sweetheart.”

While a man traditionally plays the intimidating Big Jule, a female performer, Colleen Pagano, takes on the role in MNM’s production. And Pagano plays Big Jule with a commanding aura, creating a strong female character, which is always welcome in the MeToo age.

On a less positive note, Guy Haubrich’s lighting design is questionable at times. True, the lighting is less intense for numbers such as “I’ve Never Been in Love Before.” This enhances the song’s romantic aura. However, during realistic scenes, the stage is rather dark for seemingly no reason. As a result, without the actors highlighted, it can be difficult to see their facial expressions.

The set, by artist/designer Cindi Blank Taylor, includes an impressive-looking model of New York City’s skyline. Also, signs that we associate with the Big Apple, such as those indicating Broadway and The Astor, dot the scenic landscape. Curiously, though, such signs remain up during scenes taking place in Cuba.

On another note, Penny Koleos Williams’ colorful costumes convey information about the characters. And sound designer Justin Thompson’s work allows us to clearly hear most of the dialogue and lyrics.

A live orchestra sounds strong without drowning out the actors, most of whom have able singing voices. The performers also deftly execute Jonathan Eisele’s narrative-enhancing choreography.

Director Van Dyke helps bring Guys and Dolls into the 21st century by casting a female to play Big Jule.

Speaking of sex, is the song “Marry the Man Today” female empowering, or does it seem to merely placate women? Regardless of your view, Marlowe and Sessa sing it with the kind of confidence and toughness that would please MeToo advocates.

With likable oddball characters and odd couples, humorous, smart lyrics, as well as one of the greatest scores in musical theater history, it is easy to see why Guys and Dolls is a time-tested show that offers an escape from our troubled world. And while MNM’s production is not always effective, it is certainly worthy of your time and money.

MNM Theatre Company’s production of Guys and Dolls runs through April 16. For tickets, go to https://www.showpass.com/lpacfl-guys-and-dolls. The Lauderhill Performing Arts Center is located at 3800 NW 11th Place in Lauderhill. For more information about the production or MNM Theatre Company, go to www.mnmtheatre.org or call (954) 777-2055.