Fefu And Her Friends 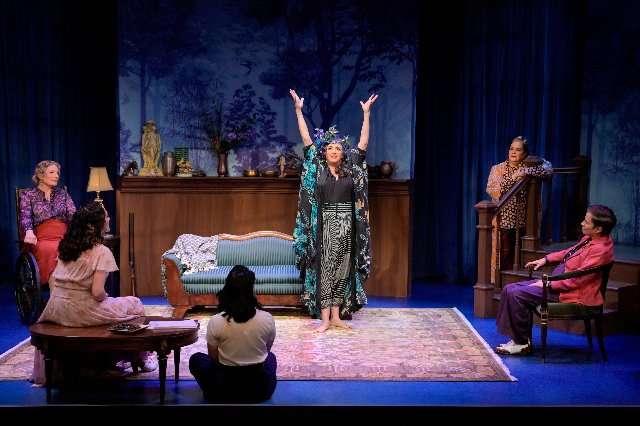 Sarita Ocón as Christina and Jennifer Ikeda as Cindy (both facing away), Lisa Anne Porter as Julia, Cindy Goldfield as Emma, Catherine Castellanos as Fefu, Marga Gomez as Cecilia. Photo by Kevin Berne.

In 1936, Clare Boothe Luce’s “The Women” became the first play with an all-female cast to reach the stage.  The women came from various walks of life; topics focused mostly on women’s relationships with men; the venues ranged from Manhattan to Reno and a trans-continental train that linked them; it took place over years; and the characters were stylized.

In 1977, María Irene Fornés’ innovative “Fefu and Her Friends” replicated the notion of an all-female cast but flips the script on all of those dimensions.  It concerns a reunion of a group of friends gathered to rehearse a presentation to be given to a charity; themes are varied, including women’s relationships with women, which was pretty daring at the time; the single setting is Fefu’s house; action takes place in one day; and the characters, if a little wacky, are grounded in realism.  ACT has assembled a cast of some of the Bay Area’s finest actors and provides a beautifully produced and directed, entertaining production of this quasi-absurdist play.

But first, a note on a distinguishing structural conceit that limits the number of sites where it can be produced and creates unusual logistics challenges.  Although the happenings occur in one house, they span five locations.  For the opening and closing acts, the living room scenes are performed on the main stage.  In between, four breakout rooms are used for activities that go on simultaneously.  The audience is divided into four groups that rotate to the various locations to see the nine-minute scenes.  This play is highly regarded but seldom performed because of the design demands, so take advantage of seeing it while you can.

The use of simultaneity had been raised to high art by Alan Ayckbourn’s “Norman Conquests,” comprised of three full plays, each occurring in different parts of a house and grounds with the same six characters in each.  However, Fornés’ twist of the promenading to the four small locations adds the opportunity for audience reflection and sharing insights during the proceedings.   The viewer also observes those scenes with such intimacy as to feel like a member of the reunion.

The play is set in New England in 1935.  Although Fefu, portrayed with flamboyance and dominance by the redoubtable Catherine Castellanos, facilitates the affair, wheelchair-bound Julia represents the axis of the plotline.  Sometime past, when a hunter had killed a deer in the woods, Julia, who was in attendance, fell as if shot herself.  And while no external wound was found, Julia suffered the loss of movement in her legs and a recurring madness developed.  Perhaps her condition represents the invisible emotional pain that many women suffer.

From start to finish, Julia’s story is quite short, but narratives zigzag as we learn about the women’s lives and relationships.  The playwright’s goal seems to be more about getting to know some real and diverse women and their relationships behind the curtains, rather than pressing a particular thematic agenda.  The content of scenes is all over the place.  One breakout session takes place in the study where Christina verbalizes her French language lessons and Cindy muses aloud at world records in a “Ripley’s Believe It Or Not” book.  They intermittently chat about things like the literal versus figurative meanings of being swept away.  That’s it!

Meanwhile, in the kitchen, Paula deconstructs the cycle of love into its sequence of events and determines that it lasts for seven years and three months.  As she’s solving this profound mystery, she is visited by Cecilia, a former lover who appears interested in rekindling the flame.

The only breakout session with complete linearity to the central narratives has Julia lying in a semi-conscious state in a bedroom, hearing voices and mumbling about being clubbed.  Another odd thread is that she expresses misogynistic thoughts that are also espoused by Fefu in the living room.  These ideas are difficult to digest in the context of a play that advances women as whole people, but perhaps it’s another reflection of the playwright’s desire to be adventuresome and provocative rather than definitive.  As Fefu says, “Life is theater; theater is life.”

Subject matter is often dense and delivered with speed so that it may be hard to follow at a micro level, but whole skits can be missed without losing the overall sense of the play.  Each character has a chance to shine, but the most impactful is probably Cindy Goldfield as Emma.  She delivers an environmental treatise that includes dramatic sign language which is a hoot, as well as a line of questioning that starts “Do you think of genitals all the time?”

Director Pam MacKinnon marshals her resources well.  Not only are there five stages to dress, but the logistics of moving the audience groups around as well as some of the actors who appear in more than one of the simultaneous vignettes is a special challenge.  Tanya Orellana has designed five spectacular and highly varied stages with separate audience seatings.  Jake Rodriguez with sound and Russell H. Champa with lighting have also created multiples of their artistic specialties.  The distinguished cast is Catherine Castellanos as Fefu, Cindy Goldfield as Emma, Marga Gomez as Cecilia, Jennifer Ikeda as Cindy, Leontyne Mbele-Mbong as Sue, Sarita Ocón as Christina, Lisa Anne Porter as Julia, and Stacy Ross as Paula.

“Fefu and Her Friends” is a unique theatrical experience that stimulates all of the senses.  ACT’s realization excels by every measure.  But to fully appreciate it, you must be pleased to leave the theater with more questions than answers.

“Fefu and Her Friends” is written by María Irene Fornés, produced by American Conservatory Theater, and plays on its Strand Theater stage at 1127 Market Street, San Francisco, CA through May 1, 2022.