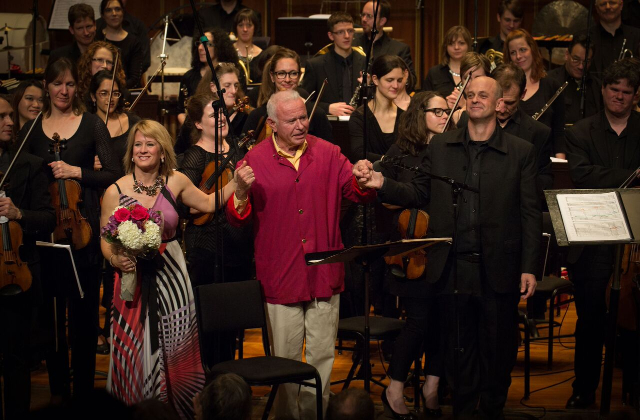 Soprano Courtenay Budd and BMOP conductor Gil Rose accept their ovations for the 2 and a half hour "Child Alice" with composer David Del Tredici, looking jaunty in red shirt. Fotos by Kathy Wittman 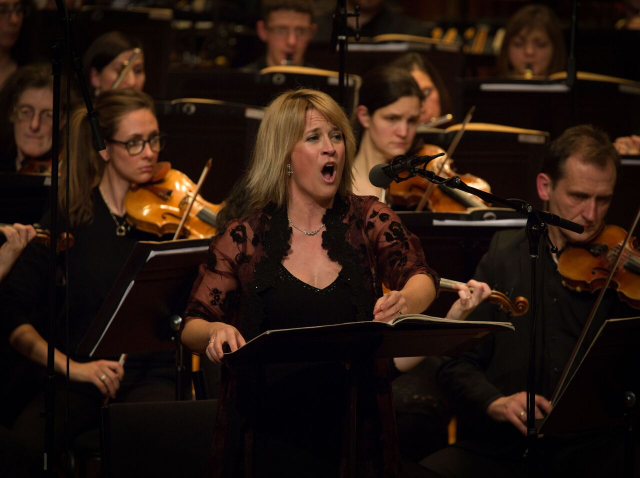 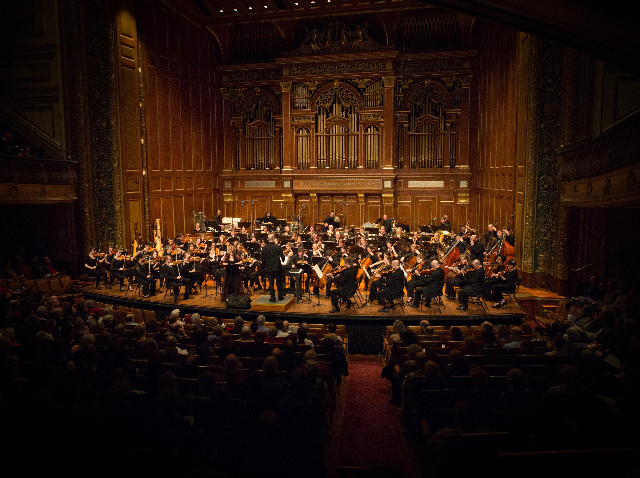 Back in the 1970s, David Del Tredici was the hottest composer in town, if one can conceive of a composer of music in the classical tradition as “hot” in any sense of the word. But he was. His romantic fantasies on “Alice in Wonderland” attracted a cult following, particularly among the gay community, and whenever they were programmed, attracted large audiences, at least compared to most contemporary music concerts. It culminated in 1978 when his “Final Alice,” commissioned by the National Endowment for the Arts on the occasion of the nation’s bicentennial, was played at Symphony Hall under Seiji Ozawa with a luminous Barbara Hendricks as the soprano soloist. The concert I attended was packed and at the end erupted in wild applause and a prompt standing ovation, at a time when standing O’s were not de rigueur. (Blame it on Broadway.) The composer, a young(ish) rake - he was born in 1937 - took his bow wearing, if I remember correctly, a leather jacket.

Then, suddenly he wasn’t hot any more. Del Tredici, who was teaching at BU and Harvard, moved to New York City, where he seems to have been swallowed up in the maw of that behemoth to the South, and the movement of which he was one of the leading exponents, neo-Romanticism, which was never embraced by the academy and the critics in its sway, was sidelined by the waves of Minimalism and other pluralistic sounds that washed over the rarefied classical music world. That academy, seemingly frozen in its adherence to late serialism, which derived from the radical reinvention of traditional western harmonics by Arnold Schoenberg and his followers in Vienna circa World War I, needed to be melted by new ideas, and neo-Romanticism was there to oblige with welcome warmth.

Today, the contemporary “classical” music world is an entirely different game, open to any ideas that produce a sound worth listening to. The proof, as it always was, is in the pudding. So, even as a lot of late-serialism sounds fresh again today – Christian Wolff is having a moment, at least in Boston - neo-Romanticism is ripe for revival and reappraisal. Music is music, and style is only the armature in which it dwells.

What I found out with the Boston Modern Orchestra Project’s performance of “Child Alice” is that Del Tredici didn’t just fade away, that he remained a prolific composer, faithful to his Romantic aesthetic, neo-or-whatever, and that, despite the implication of its title, “Final Alice” was not his final work inspired by the Lewis Carroll fairy tale. “Child Alice” came a few years later – it was completed in 1981 – and there were a couple of other Alice-related pieces as well before Del Tredici moved on to address national myths (“Paul Revere’s Ride” and “Rip Van Winkle”), along with gay subjects – the San Francisco Symphony Orchestra commissioned a song cycle titled “Gay Life.”

But Del Tredici’s neo-Romanticism remains a stretch today for most orchestras. In the years since it was completed, “Child Alice” has received a total of just two live performances – its premiere in 1986 at Carnegie Hall and, 30 years later, BMOP’s recent Jordan Hall concert. Such neglect is shocking for what might very well be one of the masterpieces of its era, and Gil Rose and the BMOP are to be commended for bringing it back to life. Their plans to record the work – it has launched a Kickstarter campaign to fund it - could bring the work to the audience it deserves.

The neglect cannot be attributed solely to Del Tredici’s style. His prolixity is a major factor. At full length, “Child Alice” clocks in at two and a half hours, not including intermission. In other words, it is the length of an opera, but it is not an opera. Its several parts can be and have been performed separately, which might be the best way for contemporary audiences who have never heard the work to be introduced to it. (The first half, “In Memory of a Summer Day,” easily stands alone as a complete work.)

It is, in short, like much of Del Tredici’s work, too much of a muchness. That that muchness is gorgeous, rhapsodic and moving makes its oppressive length a tragic flaw both of the work and of the composer. This is music the contemporary audience needs to hear. (Del Tredici is badly served by Youtube, where you can usually find anything and everything.)

“Child Alice” calls for a large orchestra, rich in brass, woodwinds and percussion to create the colorful, often exotic, sounds Del Tredici requires. A pair of harps, often used to invoke the world of dreams, plays a prominent role. But like the late-romantic predecessors – Mahler, Strauss and implicitly Puccini – whose legacies Del Tredici seeks to add to, string instruments are at the heart of his orchestrations. Rich washes of string-dominated orchestral sound create swooning raptures.

All of which are deployed to dress up and fill out, at least in the first hour-plus part, the most banal of ditties, a sing-songy rhyme that might have originated in Alice’s nursery. Indeed, the song is so banal, that unlike other infectious melodies you leave the theater humming, as soon as the piece finishes, you have a hard time remembering it! (At least I did.) Whether that is Del Tredici’s intention or perhaps the fact that he is a weak melodist – none of the tunes in the more melodically varied second part are memorable either – is an open question. The composers whose orchestrations he is deeply indebted to were master melodists.

Of course, a lot of water passed under the bridge between the last of the great, no-neo needed, Romantics and Del Tredici. And he is not unaware of the revolution in sound and styles that came between them and him. In a program note, Robert Kirzinger notes that Del Tredici had studied with modernists like Earl Kim and Roger Sessions and in fact in his early years wrote atonal music, setting texts by James Joyce. Of course, when modernism was failing, both Joyce and Carroll, along with Laurence Sterne, were among the writers who were looked to as forebears for a new post-modern aesthetic, just as Marcel Duchamp was rescued from oblivion by a generation of artists who resisted the ossifying modernist academy in the visual arts.

What was common among artists like Jasper Johns, Robert Rauschenberg, Andy Warhol and their followers and composers like Del Tredici was their easy acceptance of pastiche, appropriation and a mixture of disparate styles – both Mondrian and Mickey Mouse were equals as source material. Of course, Warhol and Co. took over the visual arts, Del Tredici and his neo-Romantic cohort did not effect a similar revolution in music. (I can’t see anyone today getting a hard-on for the music of George Rochberg, one of the most prominent of Del Tredici’s peers.) And just as Warhol and Johns introduced a whole new image world into the visual arts without violating modernist rules about the integrity of the picture plain and the prohibition against illusion, so Del Tredici laid his Romantic urges over a rigorous modernist structure and employed atonality when it suits his needs. Sometimes Charles Ives is as much his touchstone as Mahler. As is true of the post-modernist aesthetic, a little of this, a little of that goes a long way to creating a new sound, a sound of the moment, both Mondrian and Mickey Mouse – in this case, both Strauss and Victorian parlor songs.

I am not qualified to write a detailed musicological analysis of all the tricks Del Tredici has up his sleeves – if you want that, turn to his excellent and lengthy note in the BMOP program. But let it suffice to say that a lot is going on, structurally, harmonically and texturally.

What is not going on is enacted drama, which Del Tredici’s work aspires to but never achieves. He called his hour-long “Final Alice,” an opera in concerto form, and that is what he seems to have settled on as a form to explore, which is frustrating. Is his avoidance of the opera medium a form of composer’s block, and his ever-longer song-based compositions a way of putting off the inevitable, which he never seems to have reached? I’m not a Freudian analyst – such a technique is as archaic today as Romanticism in any of its modes. But at least this listener can’t help but feel that Del Tredici never reached his true goal to write an “Alice” opera in full-throttle, unapologetic late-Romantic style, a cross of Strauss and Puccini.

Neither of the texts set to music are actually from Carroll’s two Alice texts, “Alice in Wonderful” and “Through the Looking Glass and What Alice Found There,” but are the poems that preface them. They are sung and elaborated upon by a soprano soloist, separated by lengthy purely orchestral passages. It is, as I wrote before, too much of a muchness. But a muchness that is most pleasurable, if a test of endurance.

As one has come to expect, BMOP music director and conductor Gil Rose led his forces with verve and style, cutting an easy path for the listener through a thick orchestral text. His orchestra played as if they were one of the Big Five - or how many are now counted as the creme de la creme among American ensembles - not the freelance operation it is. (And their excellence demonstrates what a deep bench of freelancers Boston musical organizations get to choose from.) They produced the rich, creamy late-Romantic sound Del Tredici’s music demands and yet were able to produce jagged, atonal sounds when called for. A versatile band led by a passionate yet cool leader.

As the soloist who is asked variously to screech, croon and vocally soar like Renee Fleming, soprano Courtenay Budd sang with commitment, if not always tonal beauty. A Del Tredici specialist, she was attuned to the demands his music makes on a singer. In Part I, Budd was not at her best. She struggled to keep her vibrato from turning into a wobble, and her thin, pure “white” voice threatened to turn shrill. Maybe it was the (unnecessary) costume change, but in Part II, she sounded like a different singer. More vocally secure – there was no evidence of wobble or even vibrato, she produced some lovely, appropriately rapturous, singing.

Oh, yes, I am a vocal music critic, or so I pretend. Let it be noted that in the final section of Part II, “All in the Golden Afternoon,” the percussionists briefly become a chorus, shouting out above the orchestra Del Tredici’s signature motif, the recitation of numbers in Italian from one – uno – to thirteen – tredici. If that sounds egotistical, well, it is, but it has a long history among composers. Bach himself did it with compositions playing on the notes his name spells, and Rachmaninoff typically ended his larger compositions with a four-beat thump that rhythmically suggests his name. Oh, yeah, the percussionists were just fine as vocalists for the moment, but they probably should stick to their day jobs.