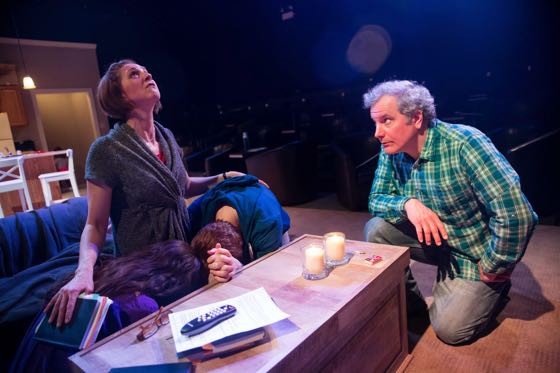 Production photos courtesy of the theater by Justin Barbin. 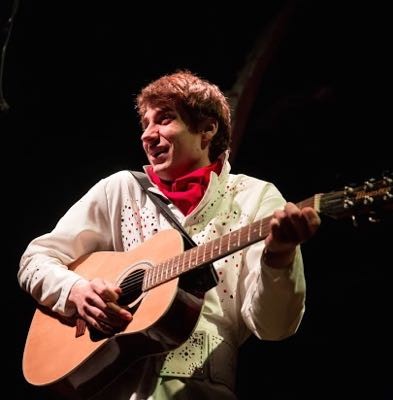 End Days by Deborah Zoe Laufer is the first production in the sparkling new Windy City Playhouse in the Irving Park neighborhood. It's a worthy outing for this new Equity theater company. End Days is a play about people who fear the end of the world is coming -- or vehemently reject that idea -- and they all seek solace from a wild variety of counselors.

Is the end of the world approaching? Sylvia Stein (Tina Gluschenko) believes so and since Jesus (yes, Jesus, played by Steven Strafford) follows her around and assists in her preparation, it's no wonder she continues to pass out flyers and engage in public prayer. Sylvia's Goth atheist teenaged daughter Rachel (nicely played by Sari Sanchez) thinks her mother is a madwoman and resists her demands for prayer and repentance. Her father Arthur (the excellent veteran Chicago actor Keith Kupferer) really doesn't give a damn. He has trouble getting out of his pajamas or leaving the house. It turns out he's suffering from PTSD as the only survivor on his company's floor in the World Trade Center on 9/11.

Into that family stew bounces Nelson Steinberg (Stephen Cefalu Jr.), the teenaged neighbor, Elvis imitator and Rachel admirer. Nelson is boundlessly optimistic and ready to try anything. Besides loving Elvis, he loves science and gives Rachel a copy of Stephen Hawking's A Brief History of Time. Rachel isn't allowed to take science anymore, her father explains. But she's great at math and, after at first resisting Nelson's puppy-dog advances, devours the Hawking book. One night while she's high on weed, Hawking (Strafford) appears to her in his wheelchair speaking through his computer.

Strafford is more believable as Hawking than as Jesus. But maybe that's just me. (Strafford's Jesus looks like the man I occasionally see on State Street or riding the #36 bus, wearing a white (or seasonally purple) robe and carrying a large cross. He's been seen as recently as December, riding the Blue Line.)

While Sylvia waits for the rapture (she believes it's scheduled for Wednesday), Nelson manages to change the whole family dynamic. Arthur gets dressed and shops for food. Rachel gets excited about science -- and food. On the appointed day, a thunderstorm crashes overhead but no one is launched into heaven, and no one is left behind.

As a final perfect touch, REM's "The End of the World as We Know It" plays over the sound system.

Laufer's script was a finalist for the 2008 Harold and Mimi Steinberg/ATCA New Play Award and it bears the quality of a work that went through that rigorous screening. The dialogue is smart, funny and often moving. The company's publicity describes the play as a "comic romp," but the play is really a drama with some effective laugh lines.

Director Henry Godinez uses the transverse playhouse space (with audience on both sides) to advantage but the very long space encouraged my swiveling in my comfy upholstered theater seat. Brian Sidney Bembridge's set design features a complete kitchen at one end of the set and a clever but distracting ceiling assemblage. I kept trying to figure out if it meant anything.

The new Windy City Playhouse is a spacious, comfortable storefront with a large lobby area featuring a bar, hightop tables and a seating area with sofa and chairs upholstered in charcoal/silver leather. Paintings by local artists line the walls; they're for sale. The bar offers signature cocktails inspired by the current play. The recipe for the Stephen Hawking, for instance, includes "Laird's Applejack infused with green tea, honey, apple juice, garnished with apple slice and orange twist." The bar also serves small plates.

Theater seating is luxurious; the lower rows are swiveling upholstered leather chairs; a small drinks table sits between each pair of seats. The top row of movie-theater-style seats has cupholders with a drink ledge along the row. The theater seats 130 for this show and can be reconfigured for up to 150. The playhouse is a nonprofit organization primarily funded by Amy, Milan and Josh Rubenstein. Amy Rubenstein is artistic director.

End Days (two hours plus one intermission) continues at the Windy City Playhouse, 3014 W. Irving Park Rd., through April 26. Performances are at varying times Wednesday through Sunday. You can buy tickets for $20-$45 online or by calling 312-374-3196.