By the Way, Meet Vera Stark At LyricStage Company

Witty Take on Difficulties of Race, Stardom and the American Way 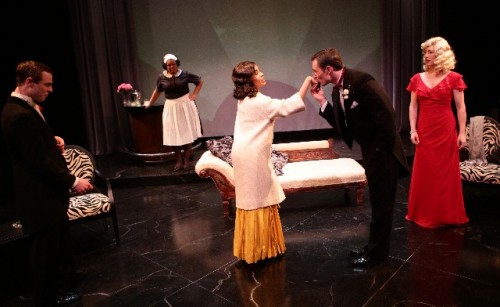 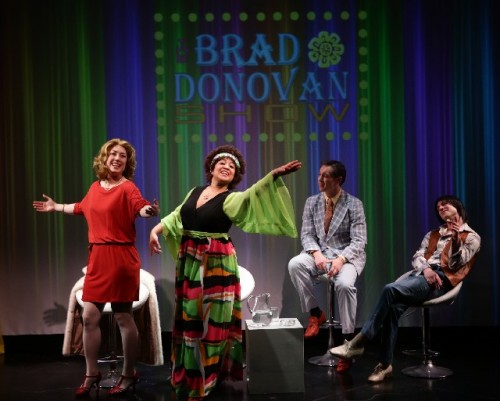 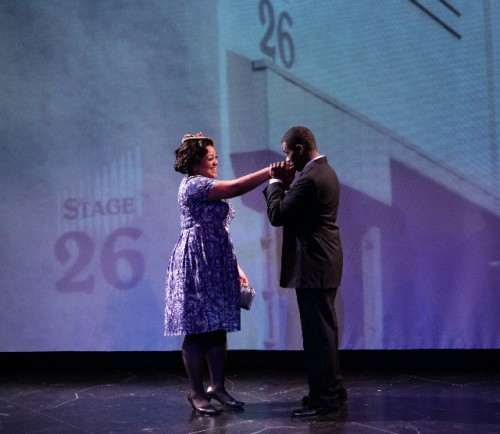 Kami and Terrell At the Movie Studio in the 1930s 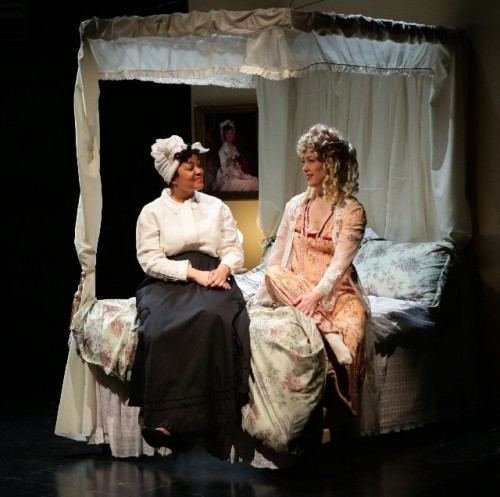 Kami and Hannah during filming of The Belle of New Orleans 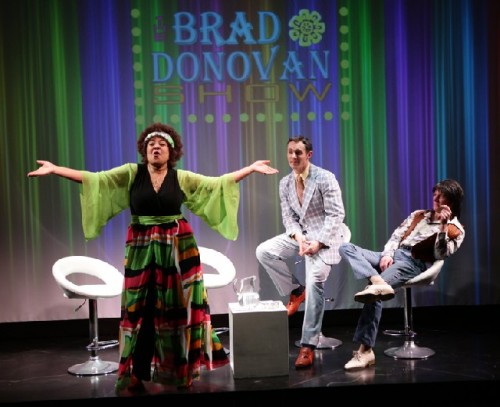 Kami performing on the 1973 Talk Show with Kelby and Greg 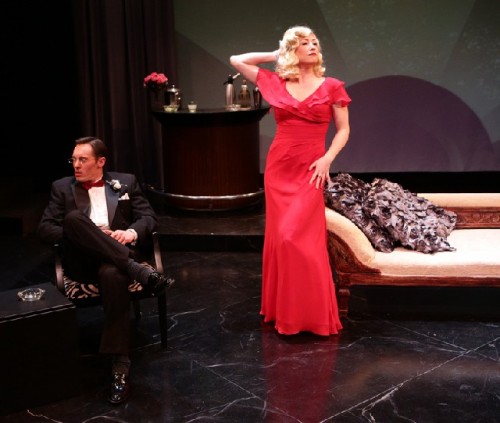 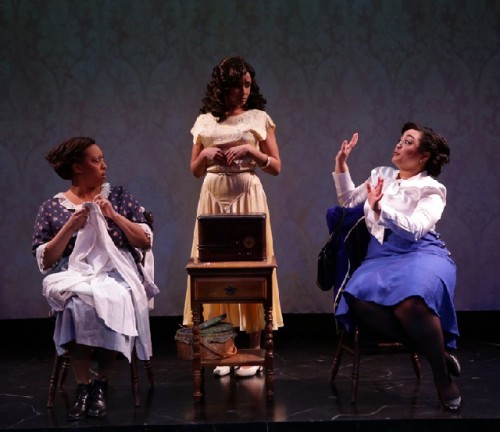 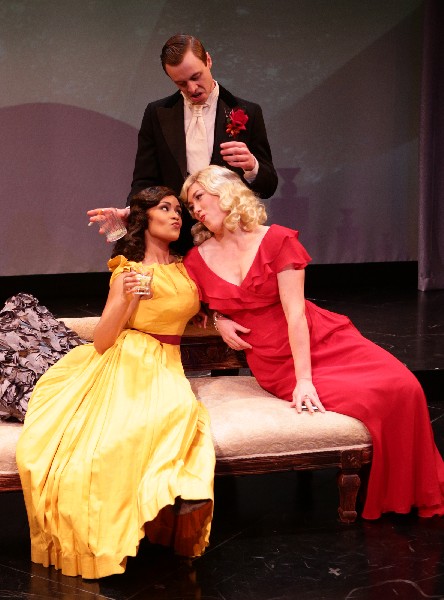 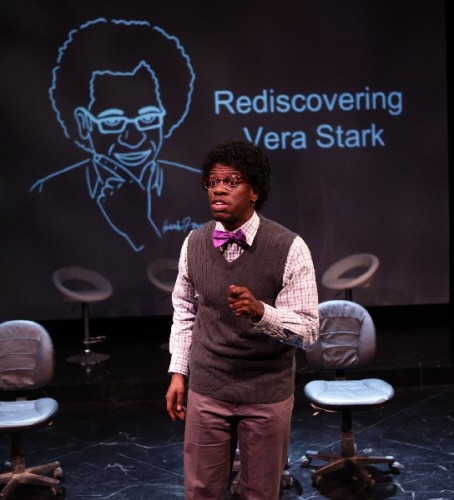 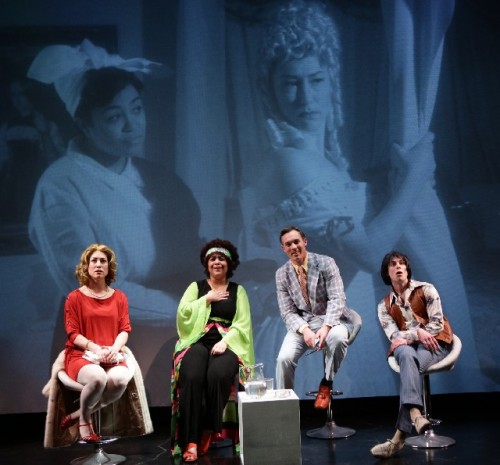 Hannah, Kami, Kelby and Greg on 1973 Talk Show with a still of The belle of New Orleans behind them

By the Way, Meet Vera Stark by playwright Lynn Nottage, now at the LyricStage Company, is a thoughtfully crafted play about very difficult subjects. With a gifted cast and sensational technical stagecraft, the narrative expresses the societal indignities and cultural barriers for African-American actors, in this case actresses, to achieve appropriate recognition of any kind. Not least of which were racist and cruel stereotypes and caricatures that comprised the majority of the period's rarely available acting roles.

The playwright speaks to the general dream of making it as an actor in Hollywood, the notion of what specific racial identity means, and the concept of the secret of passing as white by a mixed race individual. Who is partially black, has lighter skin color and even passes themselves off as South American is a strange, difficult part of our American history and culture. It spoke and speaks to race, class and hypocrisy. It was part of professional baseball and often the premise of a variety of shows and movies like Showboat (1927).

Corporate Hollywood has never been a bastion of liberal thought. On the contrary, it has been a racist institution that stereotyped not only African-Americans, but also a variety of Asians and Latin Americans. This can be dated to The Birth of A Nation (1915) by D.W. Griffith, a film that celebrated negative to egregious racist stereotypes of Black Americans.

This racist approach of American films seemed to soften a bit in the 1920s and '30s to reflect African-Americans as only servants, service providers or often lazy, ill-educated but happy individuals. These images were reinforced by singing and dancing minstrel types as well. To add insult to injury, white men actually put on now embarrassing blackface to pretend to be black performers (Al Jolson, Eddie Cantor, etc.). Black women were mostly portrayed as either servants or prostitutes.

When portrayed positively, the roles were usually as a loyal heart-of-gold happy servant or self-sacrificing slave. The first African-American to win an Academy Award was Hattie McDaniel who played the sensible Mammy to Scarlet O'Hara's irrational and irresponsible white, landed gentry in Gone With The Wind.

Playwright Nottage has wrestled with several heavy issues in the play. None more so than the resilience of actors in general and Black actors in particular. Symbolically, Vera Stark is a strong, determined Black woman who, in order to find work, is forced to go against her true self to portray the passive, obedient servant or noble slave. This has consequences. Her Hollywood roommates take on different paths to their careers.

The two acts of By the Way, Meet Vera Stark are separated by about 70 years. The first act sets the stage as Vera and her youthful colleagues are hopeful ingénues and in the case of her white boss/friend, a young starlet. The second act is an entertaining pseudo-intellectual investigation of the life, career and disappearance of Vera in 1973.

At the beginning of Act Two, there is a brilliant early 1930s style eight-minute segment of her breakthrough film, The Belle of New Orleans. Then there is a panel discussion of who Vera was from a radical Feminist and Black cultural perspective and from another, more measured, but no less biased academic viewpoint.

Excerpts from a rather hokey 1973 television interview show are sprinkled throughout the discussion. At that point, the much older Vera has become the very image of the old trouper, still working occasionally but feeling somewhat passed over. She is reminiscent of the older, late Pearl Bailey, a performer of true talent and dignity who became a flattened image of stereotyped attributes as she aged.

And this is what happened to Vera Stark. Even with all of her early talent, society, Hollywood, American culture, etc. forced her to become something that she really wasn't and didn't want to become.

The wonderful cast members each play two roles, some as a young and older version of the same character. A multifaceted Kami Rushell Smith plays Vera Stark with nuance and percolating talent. Not enough can be said about the quality of her performance. Hannah Husband's Gloria Mitchell is just enough off-center to create an oblivious but self-entitled villainess.

Jonathan Carr, the show's Film and Media Designer, must be singled out for special mention. The film segment at the beginning of the Second Act is brilliantly rendered 1930s cinematic kitsch. Here play and movie reinforce the narrative. Pushing our concept of live theatre, technically, it looks and feels spot on. Bravo, Mr. Carr.

By the Way, Meet Vera Stark is a troubling theatrical and life journey. Initially it speaks to talent, hope, opportunity, luck and race. Later, it addresses societal norms that are not right or even fair. With an excellent cast and provocative stagecraft, this play is a thought piece for anyone interested in seeing an edgy, humorous, well-crafted play that expresses difficult issues. Besides the brilliant performances, the eight-minute film segment is worth the price of admission.