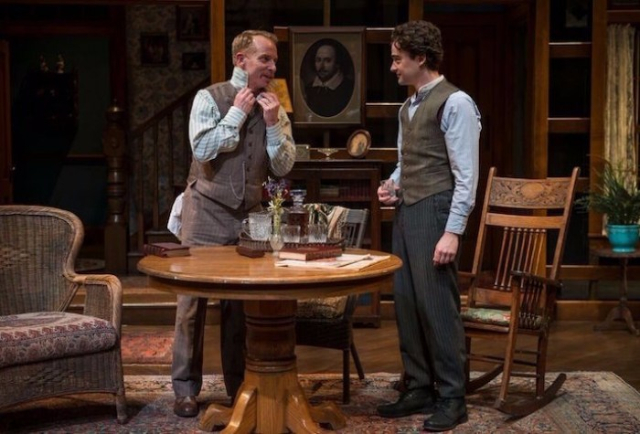 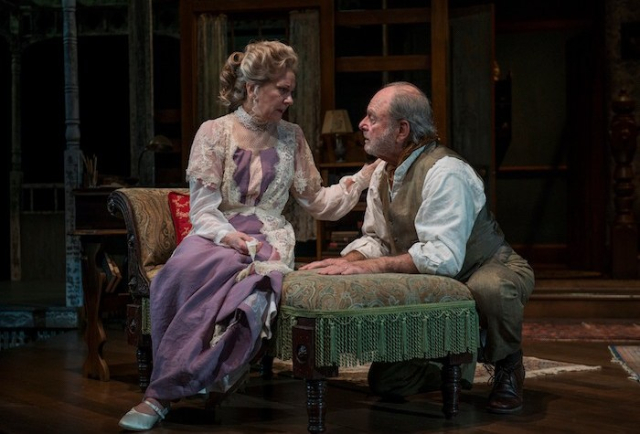 A friend says that all great stories are about dysfunctional families.

Certainly much of the best modern theater is about dysfunctional families. You have Sam Shepard (True West, Buried Child, Lie of the Mind), Arthur Miller (Death of a Salesman, All My Sons), Lillian Hellman (The Little Foxes, Another Part of the Forest), Tennessee Williams (I hardly know where to start), Edward Albee (A Delicate Balance; The Goat, or Who Is Sylvia). And of course, Eugene O’Neill.

If O’Neill is the master of dysfunctional family plays, then Long Day’s Journey Into Night is the masterpiece of the genre. Recognized as one of the greatest plays of the 20th century, the play won the Tony for best play and the Pulitzer Prize for drama in 1957.

The Court Theatre production portrays one summer day in 1912 in the life of the Tyrone family, a barely fictionalized version of O’Neill’s own family. James Tyrone (Harris Yulin) is a celebrated actor who tours nationally and lives most of his life in hotels. The family spends summers in their house in New London, Connecticut, where the play is set. His wife Mary (Mary Beth Fisher), who dreamed of becoming a nun or a concert pianist, has been treated for years for  a nervous ailment and is addicted to morphine. She believes her problems began with the birth of her youngest child, Edmund (Michael Doonan), who she alternately adores and castigates. Edmund is a poet and a socialist; he reads the avant-garde writers of the period, much to his father’s disgust. Edmund suffers from what is finally diagnosed as consumption (tuberculosis). Jamie (Dan Waller), his older brother, is in the family business. He’s an actor, an alcoholic and a cynic. James the father may be an alcoholic too; in any case, a great deal of drinking takes place from morning to night. (The boys try to deceive their father with that old trick of topping off the whiskey decanter with water.)

The day proceeds with unremitting expressions of blame, resentment, accusations and regret, with deception and affection. Arguments take up the course of the day: on drinking, Edmund’s illness, Jamie’s womanizing, money, James Sr.’s notorious stinginess. Mother against son, wife against husband, father against son, brother against brother. Morning progresses to noon and luncheon, to trips to the doctor and errands, to the evening and dinner. And late night, when Jamie returns from a night of carousing. Everything is punctuated with a drop or two from that decanter.

Director David Auburn (best known as the author of Proof) has orchestrated a solidly real and humane production of this wrenching family story. At the moment the play begins, Mary walks on to the stage, before the house lights dim, as if to signal this is a day like any other. Auburn has cast a family of superb actors in coupling Yulin and Fisher, Waller (one of those solid Chicago actors you have seen many times), and Doonan, who inhabits the character of Edmund so sensitively.

Jack Magaw has reproduced the sitting room of the Monte Cristo Cottage, as the house is now known, beautifully (although the room may appear too well kept for the comments on Tyrone’s stinginess about household spending). Lee Keenan’s lighting design artfully signals the time changes from day to night. Melissa Torchia’s costuming blends in to the early 20th century scene.

Long Day’s Journey is intensely autobiographical. For example, James Tyrone laments in a late-night talk with Edmund about his decision to play a single role repeatedly; the production was a moneymaker for his theater company but ruined his reputation as a classically trained Shakespearean actor. That is the career story of James O’Neill, the playwright’s father, who performed the leading role in Dumas’ The Count of Monte Cristo 6000 times.

If you’re visiting New London, you can visit Monte Cristo Cottage and see the room where the play is set as well as exhibits of theater history.

At three and a half hours, this isn’t a production to approach as an evening’s diversion. It’s beautifully written, somber and sad, but with many acerbic, humorous lines.