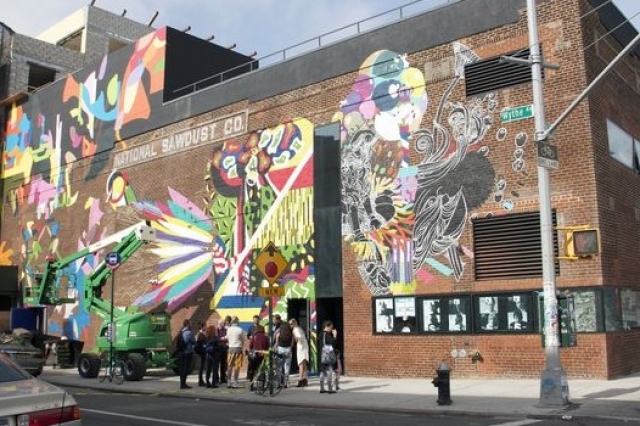 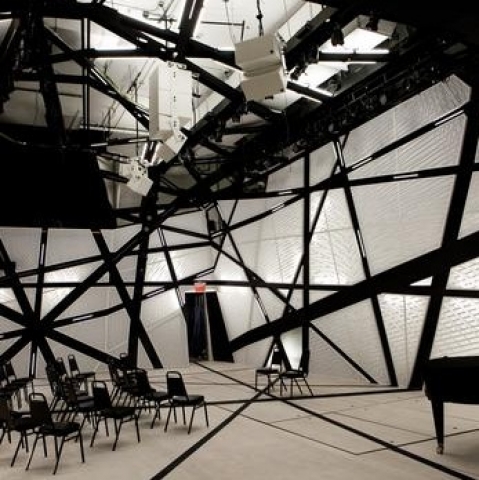 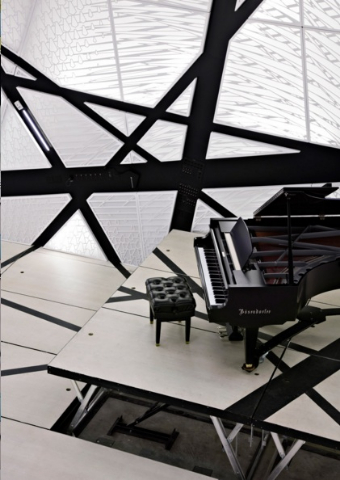 A stage filled with variable possibilities 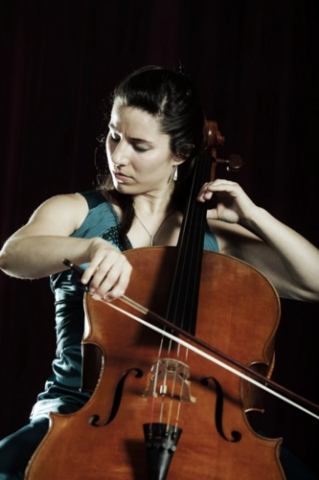 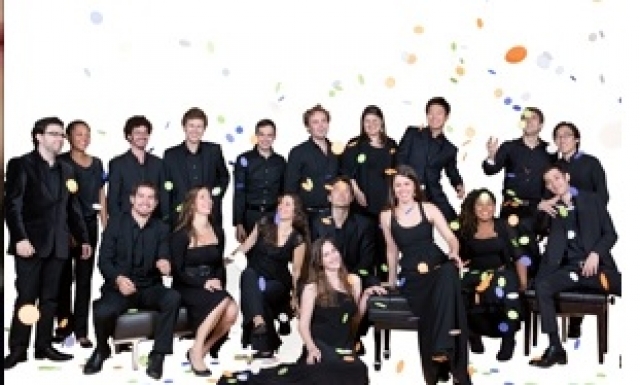 The ACJW Ensemble performed at National Sawdust. The group is part of a two-year program for fifteen elite musicians, a program of Carnegie Hall, The Juilliard School, and the Weill Music Institute in partnership with the New York City Department of Education. All of the artists performed at various times during the National Sawdust program.

The program was assembled around the idea of Reflections. "Have you ever wondered" asked a quote projected on the wall, "Whether your reflection in a puddle is more real than you are?"

A world premier of Andrea Casarrubios' Speechless was played by the composer and a percussionist Garrett Arney.  The cellist/composer weaves passionate lyricism, the bowing of the marimba subtly echoing the cello's in a melodic line.  Jay Wadley performed in his composition Varying Density, a quartet of rich textures, punctuated by the yearning trumpet of Jean Laurenz.  Jazz infiltrated the entire evening.

Off Pist, written by Swedish composer Svante Henryson, is a playful scherzo duet between Casarrubios on cello and Stanislav Chernyshev on clarinet. Melodic lines are driven by jazz improvisations and rhythms. Swing sounds were noticeable in the first few bars of the composition.

The composer, a violoncellist, is associated with both jazz and hard rock genres. The music at the center of gravity shifts between repeated bebop riff and long lyric lines from which the second theme emerges. Motoring through breaks, we are given the sense of perpetual motion.  Individual parts are featured in light and fast arpeggios. Parts also chase each other and grow to become a comprehensive melody. Movement in the cello is formed in a style of Bach's First Cello Suite in G major.

The variety of genre previews brought us to the very interesting composer, Missy Mazzoli. Mazzoli wrote Composition Still Life with Avalanche in 2008, when she was 28 years old. The ensemble performing this piece consisted of flute, clarinet, violin, percussion and piano. Mazzoli's haunting theme led off in sustained pathos with a subtle change of harmonies, joined by three mouth harmonicas, one large and two small. The nucleus is anticipated in piano rhythm pattern, briefly interrupting long lines in other instruments. A rhythmically driven theme is submitted to variations through instruments. The material is broken down into smaller portions which are then built up in tutti.

From the first bar on time is ticking. The piece oscillates around a beautiful melody breathing through every instrument of the ensemble.

Before two last pieces, we enjoyed the silence of the pioneer in appreciating the sound, believer in pure and always different and interesting sound of street traffic: John Cage.  The sound experience which he preferred above all others is sound acting and active.  Four young members of the ACJW ensemble carried out the apotheosis of silence. and absence of talking (as Cage mentioned that listening to music he felt someone is talking to him).

We then heard the New York premiere of the Claude Baker's R.S. for viola and percussion. Unlike Cages 4'33'' , the audience witnesses a music dialogue, two instrumental parts depending on each other, "telling the story" together. Throughout almost entire composition percussions are exposing the same material as the violin will, but with a slight delay. The sound characteristics of these instruments resembles dialogue.

Bulgarian born composer Dobrinka Tabakova closed the night. Shaped as a song, Tabakova showed her talent in creating wide motion picture themes that breathe. Being familiar with her Concerto for Violoncello and Strings, in the composition Insight performed at Sawdust, we recognized the composer's special treatment of strings, and her affection for them.  She creates the aura of a Russian chant, delivered in a narrow melodic span.

Program selections are made democratically by the Carnegie Hall based Ensemble. ACJW is entrusted with the choices. and this changes the aesthetic of contemporary music programs. Here they are delivered and created by the musicians who perform them.

Music's visual associations are drawn, initiated by sound, and contribute to softening the edges of the contemporary music sometimes understood as "less communicative." The artists themselves are all superb. Further concerts by ACJW at the National Sawdust promise pure pleasure.