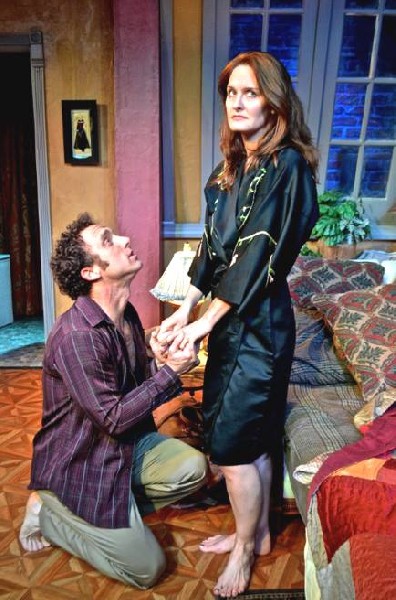 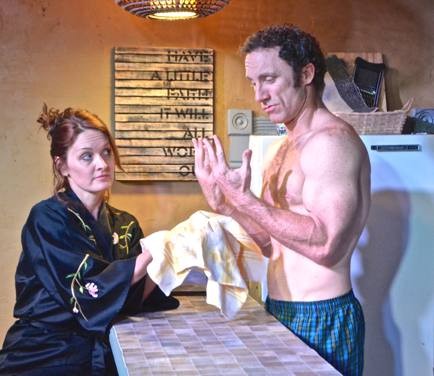 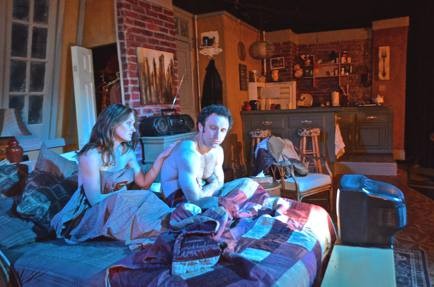 "Frankie and Johnny in the Clair de Lune.â€

CV REP of Rancho Mirage, California, one of the best Equity Theatre companies in the Coachella Valley, brings down the curtain on the final play of their highly successful 2013-2014 season of a four-play retrospective of Tony-winning playwright Terrence McNally’s early years.

The CV REP 2013-2014 season consisting of only McNally plays was an inspired decision by Founder and Artistic Director Ron Celona on several fronts. First, it brings the work one of the country’s finest playwright’s to audiences of the Coachella Valley. Second, it affords a venue for professional actors to, not only perform and stretch, but to enrich the four productions under Celona’s deft and steady direction. As they say, it’s a win-win situation. The preceding three shows: “Master Class”, “The Story of My Life”, “A Perfect Ganesh” were all first-rate, top tier productions.

With “Frankie and Johnny in the Clair de Lune”, CV REP presents a poignant comedy about two lonely people, both in their forties, whose first date ends in a one night stand with both looking for something more out of life in their work-a-day lives as a waitress and a short order cook than just working at the same hash joint.
This production is a play about grown ups for grown ups. It’s a two-character play that begins in a bed with its two characters naked, making love. There is brief nudity, yes, but it’s not gratuitous, it’s integral. If you can get past this moment, then you’re in for an evening of honesty, relevancy, poignancy, and a feeling that maybe, just maybe, there is hope for people to conquer their fears on the bumpy road of life as they attempt to maneuver the minefield we call love.

Frankie (Stephanie Dawn Greene, in a finely nuanced turn) is a survivor of the dating wars. She’s been burned before but is still cautiously vulnerable to romantic blandishments. As a waitress in a diner she interfaces with the short order cook Johnny (a charming, yet at times, an intense and vulnerable Joel Bryant)who, for lack of a better description, is not a great catch as husband material. He’s divorced, has done time in prison and like Frankie, is trying move on with his life. But he’s cocoanuts about her and he’s sweetly earnest and persistent in his pursuit of her. He’s positive she is the woman he wants to marry and he tells her so all the time.

Following their initial roll in the hay, Frankie says she’s hungry for a “western omelet” (she gave up cigarettes ages ago). Johnny jumps at the opportunity to display his cooking expertise. They slowly begin to talk and open up about themselves, and like many who have been near the bottom rung of the economic ladder their dreams are often just out of reach, but neither ever gives up. Frankie recently out of an abusive relationship is wary of all men. So sexual closeness brings out her protective cynical side.

The on-stage chemistry between Bryant and Greene is literally palpable, and their performances are richly nuanced. Both actors move between comedy and drama with fluidity and expertise. We’re pulling for this couple to get past this first date, one-night stand situation, and move on together becoming a permanent couple. Americans love stories with happy endings.

“Frankie and Johnny in the Clair de Lune” is a poignant peek into the lives of two people seeking to connect without getting hurt once again. Their situation reminded me of the lyrics in many of the songs of the great Carole King. King’s heroines after the breakup, always picked themselves up, dusted off, and then returned to the dating wars to try again. There’s no doubt about it. Women are indomitable.

There is not a wasted moment in this play. McNally is a master craftsman, and Celona’s direction is equal to the material. Once again, the set design by Jimmy Cuomo provides the space and feeling so necessary for the actors to create and perform their magic. Lighting by Stuart A. Fabel, Costumes by Aalsa Lee, with Sound by Kara Masek, along with Stage Manager Karen Goodwin, make this splendid production an entertaining evening of theatre.