Covering 126 Years of the Boston Marathon

Exhibition at the Hopkinton Center for the Arts 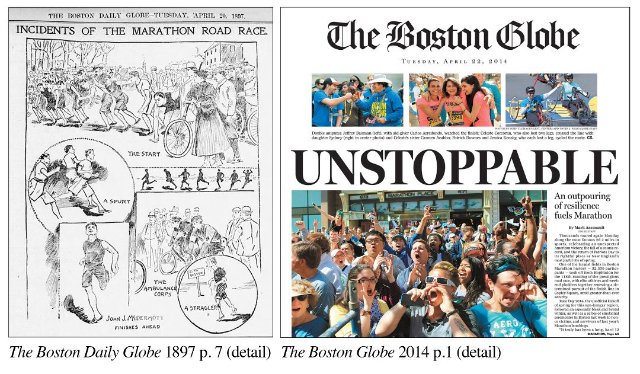 Coverage: The Boston Marathon As Reported by the Boston Globe
March 11 to April 23
Hopkinton Center for the Arts

For many years, the Hopkinton Center for the Arts has annually recognized the running of the Boston Marathon, its starting line in Hopkinton, with exhibitions and programming, recently in the form of elementary school artists drawing and painting on the marathon theme.  This year, HCA hosts independent curators Kris Waldman and Arthur Dion, who look back at the marathon’s past through the lens of The Boston Globe.

It seems fair to say that all long-lived institutions have a history of both resisting and embracing change.  Since its 1897 founding, the Boston Marathon has regularly transformed in its appearance, its demographics, and its meaning.  As its 126th running on April 18 nears, The Lotvin Family Gallery examines how the marathon’s changes have been reflected in the pages of another Boston institution, The Boston Globe, now celebrating its 150th year of publication.

What began as a local race of fifteen white males has become an international gathering of 30,000 runners and New England’s largest sporting event, with half a million spectators.  Meanwhile, a great deal of social and cultural history has transpired.  The marathon and The Globe reflect much of that.

Waldman, formerly HCA’s co-director, and Dion, director emeritus of Boston’s Gallery NAGA, produced Coverage with printing assistance by Art and Frame Emporium of Westborough and sponsorship by The Boston Globe.

Coverage runs from March 11 through April 23.  A public reception is planned for Friday, March 18 from 6 to 7 pm. Gallery hours are weekdays 9 to 5 and weekends 9 to 2.

The Lotvin Family Gallery at the Hopkinton Center for the Arts