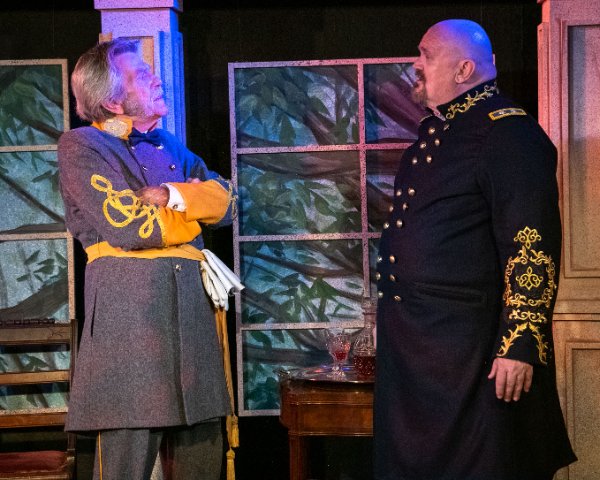 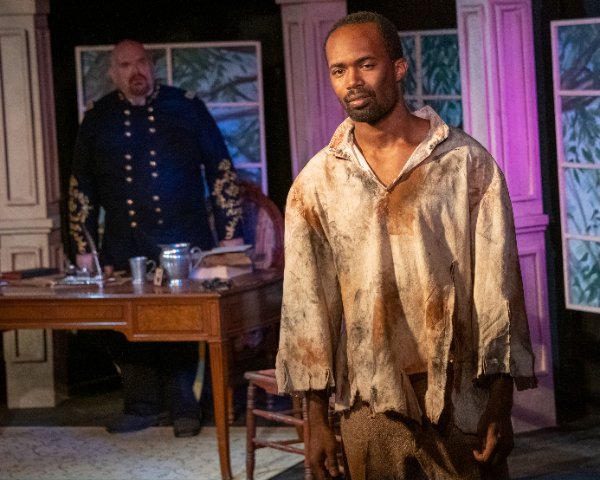 Photo by Amy Pasquantonio Shepard Mallory (Denzel McCausland) has a moment to himself as Major General Benjamin Butler (Troy J. Stanley) looks on in Boca Stage’s production of Ben Butler.

You normally would not expect to laugh uproariously while watching a play about the Civil War, set during that time period. But Ben Butler is different.

Instead of offering a dry history lesson or a depressing tale focusing on war casualties, playwright Richard Strand uses wordplay to hilarious effect in his roughly two-hour play. Indeed, instead of guns firing bullets, fast-flying zingers and sarcasm shoot out of the characters’ mouths. They land with pinpoint accuracy by hitting audience members in their funny bones. The play, during which the characters spar, with words and wit as their weapons, is, at turns, and sometimes simultaneously, tense, laid-back, droll, witty, and sarcastic.

From now through April 10, the South Florida professional company, Boca Stage, in Boca Raton, is presenting a fun, funny, energetic, and believable production in its extremely intimate space (four rows of audience seating). In fact, the play left audience members in stitches during the reviewed performance.

One thing that is particularly impressive about Strand’s play is that he makes the piece consistently comical, a la Neil Simon, without disrespecting those who fought in the Civil War or their families.

Strand based Ben Butler, which is part comedy, part historical drama, and part biography, on real events and people. For instance, Benjamin Franklin Butler, the play’s namesake, existed. Butler (1818-1893) was a major general of the Union Army, as well as a politician, lawyer, and businessman. However, it is safe to assume that what happens in Ben Butler sprang solely from the playwright’s imagination.

Here is the setup: During the beginning of the American Civil War, Union Army major general Benjamin Franklin Butler has just assumed his position at Fort Monroe in Virginia. After he reads a telegram announcing that Virginia just seceded from the Union, a lieutenant working with Butler informs him that a “Negro slave” is outside his office, demanding to speak with him. The slave’s name is Shepard Mallory (who also really existed). In fact, in addition to Mallory, a couple of other slaves housed in Mallory’s quarters escaped with him. While we never meet the others, it is safe to assume that Mallory was the only one brave enough to demand a meeting with Butler.

Under the Fugitive Slave Act of 1793, state and federal authorities had the power to capture and return runaway slaves. What is Butler to do? Does he comply with the law and return Mallory and his friends to their owner? Or does he make a move that could change the course of American history? We watch and laugh in suspense, riveted to the stage, wondering in which direction the play will head. Perhaps, as a lawyer, Butler can twist the law to Mallory’s and his fellow slaves’ advantage.

“I heard a good lawyer can always use convoluted reasoning to find a loophole,” Mallory tells Butler.

As Butler and Mallory do verbal battle over topics such as equality, respect, and the role of lawyers, the two come to realize that they are not as different from each other as they thought. In fact, they might be alike in many ways. For instance, both individuals are headstrong. And they do not hesitate to use words that sting and bite. When a major in the Confederate Army arrives, demanding the return of the slaves, Butler does not hold back.

“You, sir, are an ambassador, representing the Foreign Nation of Virginia and I am under no obligation to apply the laws of the United States to Virginia or France or Mexico or Liberia or any other foreign nation.”

Often, the exchanges between the characters are as lively as a page-turner or a riveting murder trial featuring lawyers at the top of their game.

While the play features intense moments, the piece also includes more subdued and laid-back scenes. This mixture of intensity and easygoingness, comedy and drama, physical comedy and wit, makes Ben Butler a unique play among works about war.

Strand humanizes Butler and Mallory by, for instance, presenting scenes during which they regret something that they just said. In addition, the play includes a touching moment during which we learn that Mallory is married, and that he ran away because their owner was going to separate him and his wife. At least at the fort, he is somewhat near her.

While we learn the wife’s name – Fanny — we do not learn much more about her. It would not have hurt for Strand to add more pathos to the play by fleshing Fanny out more. Come to think of it, Strand could have added depth to the other characters as well. For example, we know little about Lt. Kelly, other than the fact that he graduated from West Point.

On a more positive note, Strand attempts to debunk stereotypes about slaves by presenting Mallory as a seemingly intelligent, well-spoken individual.

Under Genie Croft’s sensitive direction, Denzel McCausland portrays the character as such. In addition, the performer injects Mallory with humanity. For example, we clearly see and hear how ashamed he is after his impulsivity gets the best of him and he says something that he regrets.

McCausland deftly plays Mallory as a complicated and unpredictable man of many emotions. He can be charming one moment, and then suddenly fly into a rage. To his credit, the actor seamlessly transitions from one emotion to the next. And McCausland, like his castmates, plays his character with an impressive naturalness.

Meanwhile, a wide, shining-eyed, burly Troy J. Stanley imbues Butler with an unpredictability that makes the character fun to watch. Stanley’s commanding Butler can be polished, patient, and understanding. But if you talk to him the wrong way or somehow get on his bad side, expect a thunderous, bone-chilling yell.

Naturally, Jordon Armstrong often stands at attention as the young Lt. Kelly. And when Butler orders him to be “at ease” during one scene, the character’s struggle to look less stiff is humorous. At first, Kelly is wary of, even hostile toward, Mallory. But by the end of the play, Armstrong’s Kelly has relaxed noticeably and he even looks at Mallory with a facial expression suggesting fondness.

Jim Gibbons also shines in the smaller role of Major Cary. He shoots accusatory looks at Butler, and injects Cary with a wariness that suggests he does not want to be at Fort Monroe any longer than he absolutely must.

While the acting is first-rate, so, too, are the technical elements.

Alberto Arroyo designed the character-defining costumes. For instance, Mallory, as a slave, hardly wears presentable clothing. Instead, he wears an outfit that looks like a bunch of dirty rags.

By contrast, Butler, Kelly, and Cary wear clean uniforms. Cary, of the Confederate Army, wears a different color than the Union Army folks. And to Arroyo’s credit, the costumes look like it is easy to move around in them.

Croft, the director, paces the production well and gives humorous moments as much emphasis as more serious ones. Also, the fact that the actors are often moving around the set enhances their spontaneity.

With Ben Butler, Strand, a versatile playwright, has written a comic treat that entertains and enlightens. The reviewed performance reportedly was sold out. And tickets might be going fast for the rest of the run.

Boca Stage’s production of Ben Butler runs through April 10 at the company’s intimate playing space, 3333 N. Federal Highway in Boca Raton. Ticket prices range from $40 to $50, depending on what day on which a particular performance takes place. For tickets, go to https://primalforces.com or call (561) 447-8829.