A Program Set To Jacques Brel and Edith Piaf 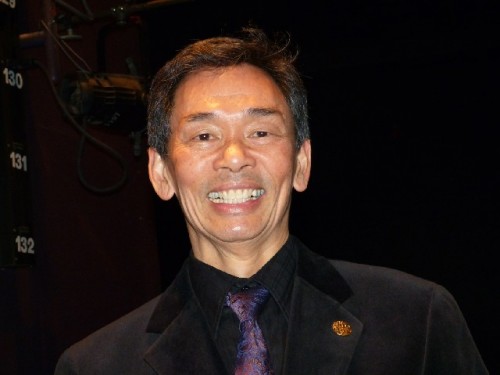 David Hochoy has been artistic director of the company for twenty two years. Giuliano photo., 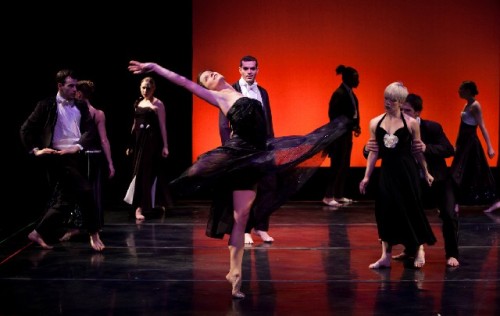 The ensemble performing PIAF: A Celebration. 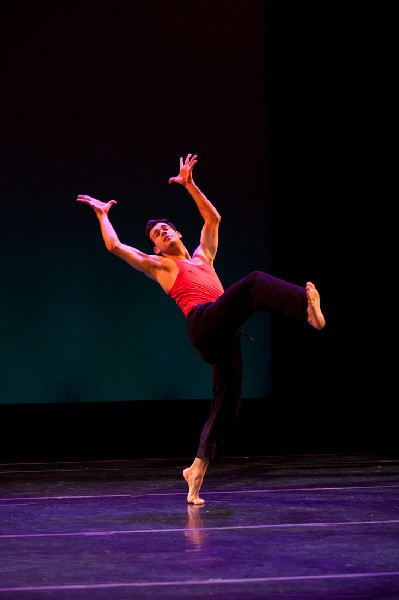 A solo by Zack Young set to Brel’s "Jackie." 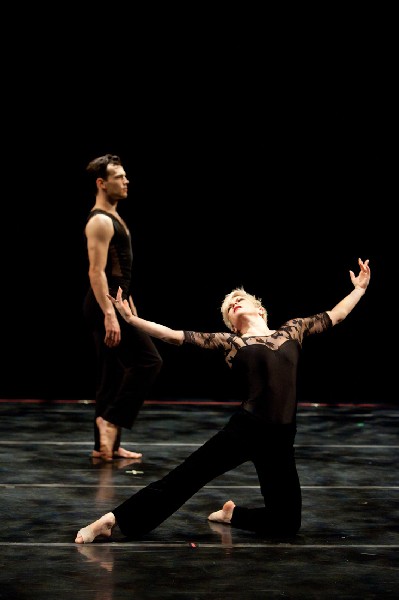 The spectacular partnering of Young and Jillian Godwin.

Dance Kaleidoscope, which was founded in 1972, shares stages with the Indiana Repertory Theatre in Indianapolis.

The visiting American Theatre Critics Association was invited to an excerpt of the second part of the current production of Piaf Plus. It featured the singing of the legendary Edith Piaf with choreography by David Hochoy, now in his 22nd season as artistic director.

Following the excerpt there was a reception prior to the evening performance of The Whipping Man on the main stage. The dance was presented in an upper level, intimate black box space. The thrust stage was flanked by seating on three sides.

While I had hoped to catch a word with Hochoy he stayed briefly at the reception.

What we saw was so enticing that, with several options on Sunday afternoon, we returned to enjoy the full performance.

This time I managed to converse with him and he seemed surprised when I thrust a camera in his face. But I did capture an engaging smile.

There was much that I wanted to know about the long standing company and its artistic director. Does it travel and has it been to Jacob’s Pillow? Disappointingly, the answer was no on both counts, although he would very much like to travel and visit Pillow, where he appeared as a student and performer.

He spent a number of years with the Martha Graham Company as student/ soloist and then teacher. Hochoy also studied with Alvin Ailey.

Attending a single performance is not adequate to know a company and its choreographer. One absorbed, however, the modernist, Graham tradition in a well schooled group of eleven dancers and elegant, beautiful, often thrilling dance which by current standards may be viewed as conservative.

He choreographed Le Creation du Monde for a collaboration with Maestro Mario Venzago and the Indianapolis Symphony Orchestra. He has also choreographed numerous productions at the Indiana Repertory Theatre including A Christmas Carol, the Civic Theatre, Phoenix Theatre, Edyvean Repertory Theatre, Salome for the Arizona Opera and Miss Evers' Boys for Cincinnati Playhouse in the Park and for Santa Fe Stages.

Hochoy co-directed As You Like It at the Indiana Repertory Theatre with IRT's artistic director Janet Allen. He was also Artistic Director of The Green Shows at the Oregon Shakespeare Festival (OSF) for ten seasons. He has choreographed The Beat on the Ball State University Student Dance Company and most recently re-set sections of Fascinatin' Rhythm on Tiler Peck and Joaquin De Luz of the New York City Ballet and Sarah Lane of American Ballet Theatre for the inaugural gala performance of Indianapolis City Ballet.

There was an eclectic athleticism in Frere Jacques (2009), set to music by Jacques Brel with ten songs in French and English, which comprised the first act. This is narrative dance illustrating the lyrics, energy, and mood of the music.

For the familiar “Carousel” the company formed the merry, festive circles of a merry-go-round. The audience roared its approval of Zach Young in the solo “Jackie.”

“Marathon” which opened the program was perhaps too literal with numbers on their backs simulating a competition. Although set to French music the choreography seemed so American that for a moment it felt like a take on Oklahoma with its raucous, Mid Western flavored choreography by Agnes de Mille.

Based on this miniscule sample Hochoy seems embedded in the modernist movement to create an American theatre and dance even though the references in this evening had a French accent. This is conveyed by the clarity, articulation, energy, athleticism and transparency of broad, open, sweeping movement. And of course that story telling which is accessible and engaging to a general audience.

Perhaps rightly, we do not come to Indianapolis, to find new, different and cutting edge interpretations of the arts. So DK seemed well focused in the mainstream mix of theatre and arts we experienced during five days spent in the American heartland.

Don’t get me wrong.

That this company is scrumptiously, deliciously, exquisitely gorgeous is A OK.

Like that second half of the program PIAF: A Celebration (2011) which, after a thumbnail teaser, had us running back for more.

Before the performance I commented to Hochoy that my French is not good enough to understand the lyrics of Edith Piaf (19 December 1915 – 11 October 1963). He responded that you don’t have to.

How right he was.

Her torchy singing is as French as the Eiffel Tower. What you do not understand you feel in your guts. If you just listen it is an experience that evokes the singing of Billie Holiday.

That awesome passion is richly conveyed in the elegant dance that has the company dressed formally in tails and black evening gowns sweeping about the stage in circling, ball room waltzes.

But 90% of the reason we returned for more was the tough, taut, smallish, blonde, lead dancer Jilian Godwin. She literally threw herself all over the floor in stark movements that evoked startled gasps from the audience. Godwin was effectively partnered by Zach Young in the emotionally rich and loaded duet set to “Mon Dieu.” In a frenzy of the torment of love she would leap and cling to him. Young lifted her aloft then lowered her to the floor with gestures ranging from embrace to rejection. My God indeed!

What a find and treasure. Now how the heck are they going to keep an awesome talent like Ms Godwin down on the farm in good old Indy? She is the kind of performer for whom we would come racing back over and over again.

In the ensemble pieces she took her place among longer and more elegant dancers. Like Piaf herself Godwin is a pint sized bundle of energy. Well, not exactly, as Piaf was really diminutive with that uncanny huge, throbbing voice.

The Piaf anthem “La Vie en rose” was richly rendered with the company swooping about in enormous arcs resonating with the life affirming lyrics.

Let’s hope that this company travels in the future. It would be a great benefit for the dancers to reach wider audiences. As well as to face the scrutiny, competition, and inspiration of the global contemporary dance world.