Hasse Is a Hot Composer Again 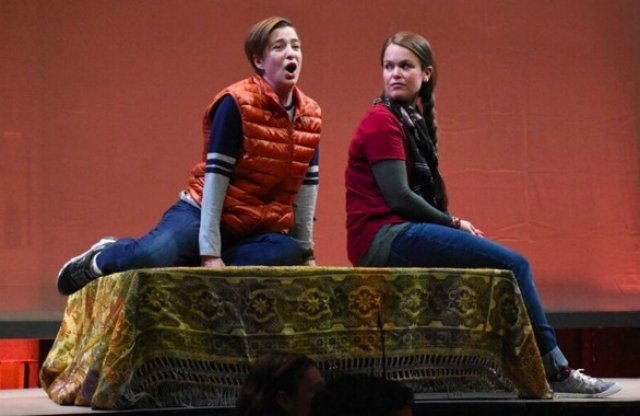 Piramo and Tisbe by Johann Adolf Hasse, presented by the little Opera Company. 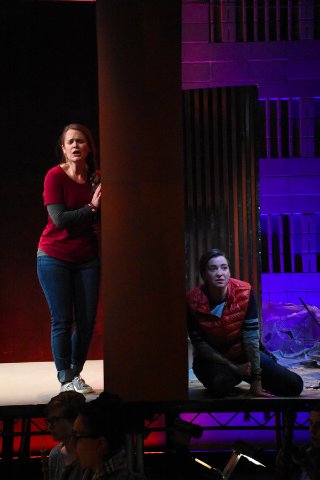 Separated by only a wall, Tisbe and Piramo listen for each other. 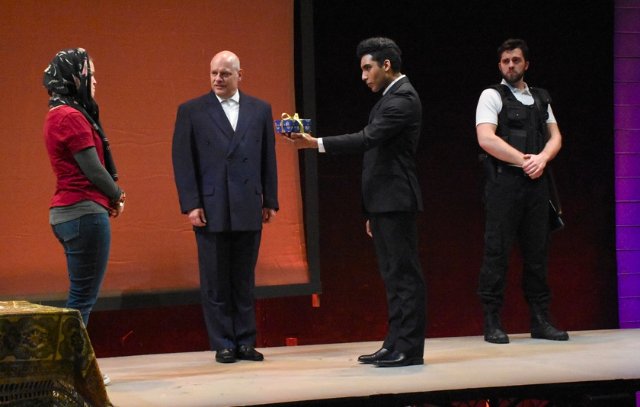 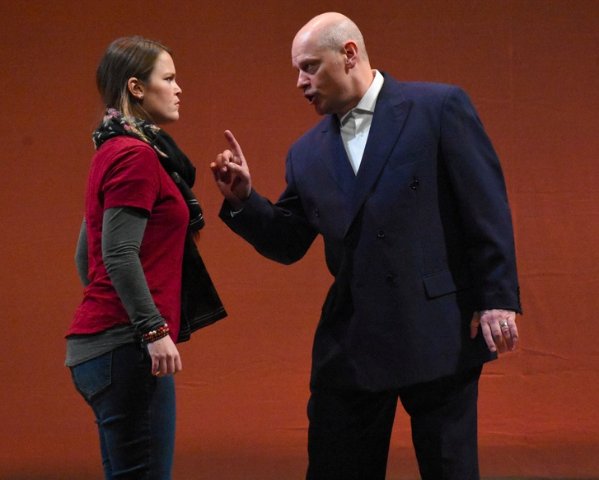 Her father demands that Tisbe marry his chosen man. 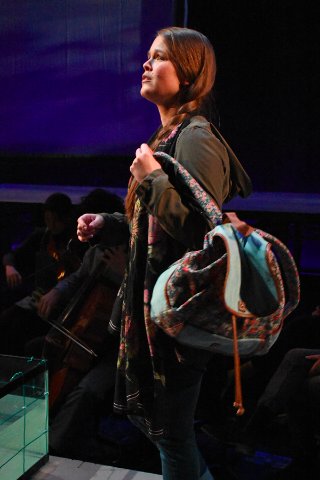 Tisbe ready to run off to meet Piramo.

The superb little Opera company has mounted Hasse’s Piramo and Tisbe, based on the tale told in Ovid’s Metamorphosis, Book IV. It resembles Romeo and Juliet. Two young people, who in this case live in adjoining homes in Babylon, fall in love through the wall that separates them, but are driven apart by warring parents. All does not end well. Yet in the process of telling the story, glorious music abounds.

Farinelli, the megastar castrati singer who we’ve been lucky enough to come to know on Broadway this year as a healer of Kings, often sang Hasse arias. For some reason, Hasse’s own star sank rapidly along with much Baroque opera. Only recently has his work begun to be mounted again.

Hasse certainly showcases the voice. Soprano Kelly Curtin and mezzo Kristin Gornstein are more than up to challenge, displaying bravura runs and deep emotion moment to moment. Bruce Downen is effective in the thankless role of the father who would keep true lovers from bonding. This three-hander chamber opera is rich in story and composition.

Much baroque music and some lighter Rossini often provide a rather simple musical palette, where phrases and whole sections are repeated. The listener is never bored, because the music is so beautiful. This is true of little Opera’s production.

The New Vintage Baroque Ensemble played on period instruments. Woodwinds, we are reminded, are woodwinds because they were originally made of wood. In the middle of the 17th century instrument makers in Amsterdam, Paris and Nuremberg began constructing the body of the choristfagott in four parts: wing joint, boot, long joint and bell. The range of the new, four-part instrument, which became generally known as the bassoon was extended downward by a whole tone. The new bassoon fulfilled a number of different functions: together with two oboes it formed a woodwind group that was used to contrast with the strings. bassoons were pleasures to hear in the performance.

Most Baroque bows are significantly lighter than modern bows with the balance point generally lower: holding a modern bow slightly away from the frog approaches this lighter balance. When choosing strings, there is a wide selection of high-quality gut strings available now, of the sort that were in common usage. It was evident that string performers for Piramo were holding their bows away from the frog.

The projections behind the set made references that only someone familiar with Ovid would recognize.   These include a lioness who bloodies Tisbe’s dropped scarf.  Piramo mistakes the blood the lion has drunk from a former feast as Tisbe's.  He presumes Tisbe dead when he sees her bloody scarf. Berries on a tree are at first a muted brown, but turn bright red at the end of the production in honor of the lovers’ undying bond.

The stage was created on two levels. The top two thirds are the home of Tisbe. The other third, a secret hideaway Piramo has created to hide their love.

The ill-fated grave of Nimo, the lover's designated meeting place, is a level down. Here the dramatic escape of the runaways is resolved in Romeo and Juliet style.  The deaths are more brutal, however, with no cushion of holy love and a before-death marriage.

The New Vintage Baroque ensemble is right before our eyes in the front of the set and at the base of the bleacher style audience seating arrangement. We can see everything. All the artists can see each other. This transparency matches that of the music of Hasse, perfectly beautiful high Baroque. Hasse’s tunes could become as popular in our times as Handel’s have in the voices of singers who make each note wrenching and gorgeous. The little Opera company is leading the way re-introducing this once hot composer.