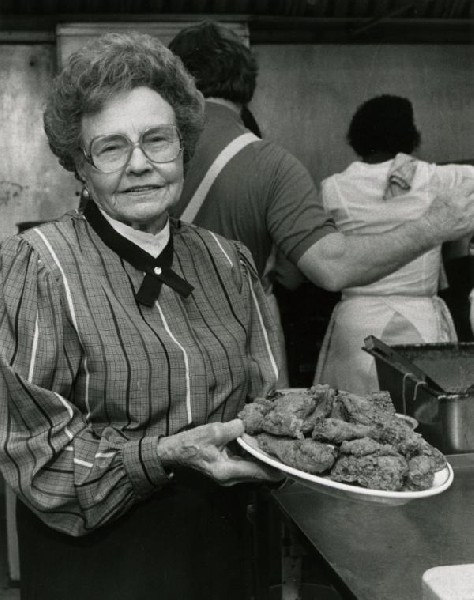 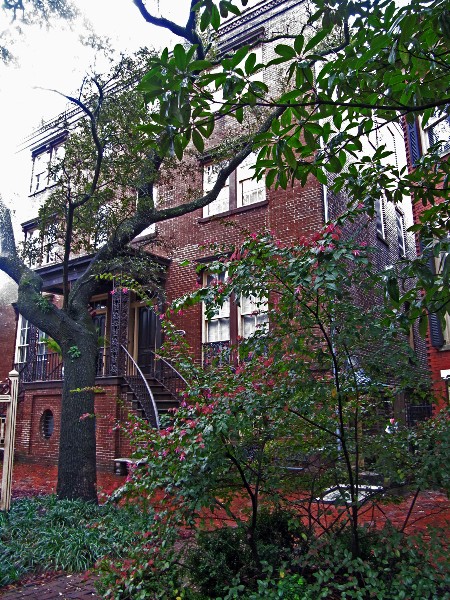 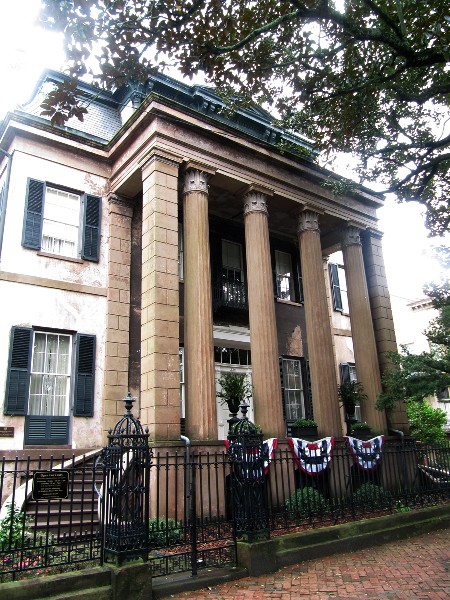 In a residential area with many gracious mansions. 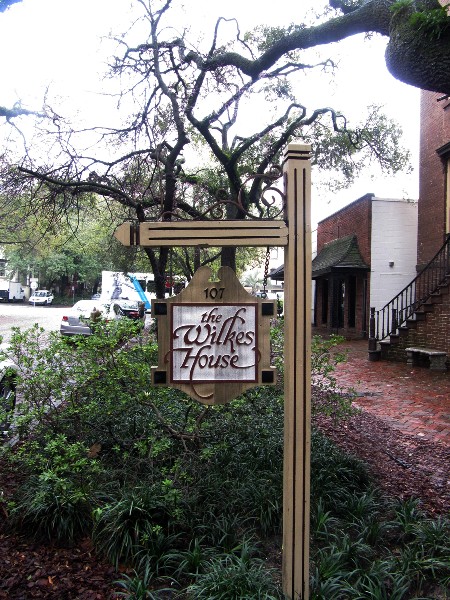 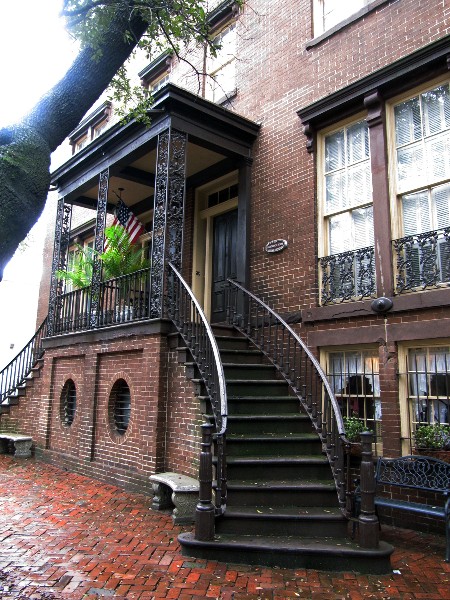 The stairs lead to the boarding house with the dining room in the lower level. 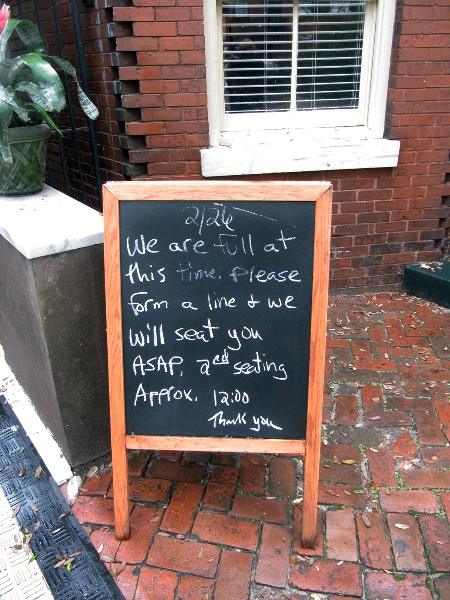 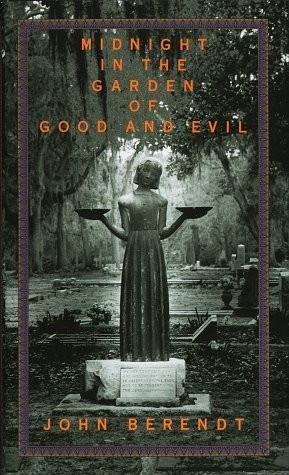 The book that inspired our travel to Savannah. 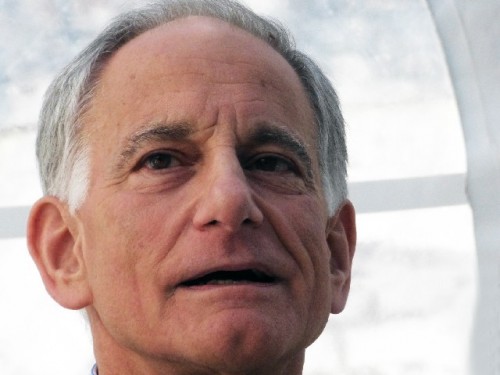 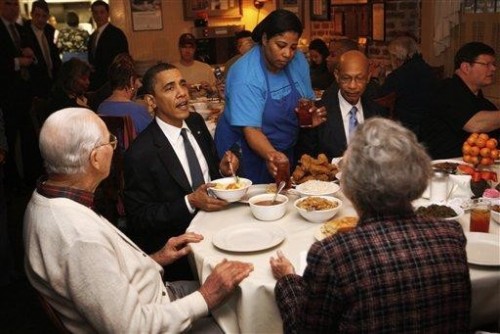 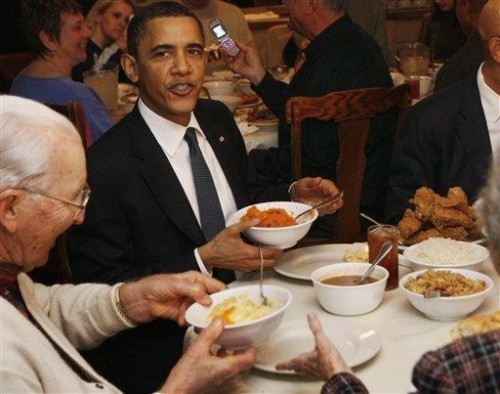 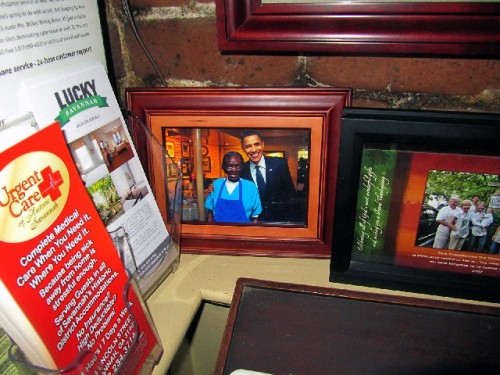 A reminder of the presidential visit. 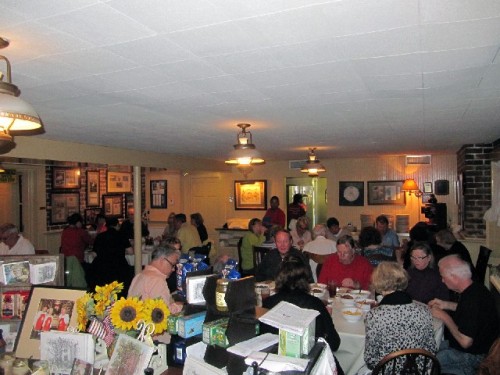 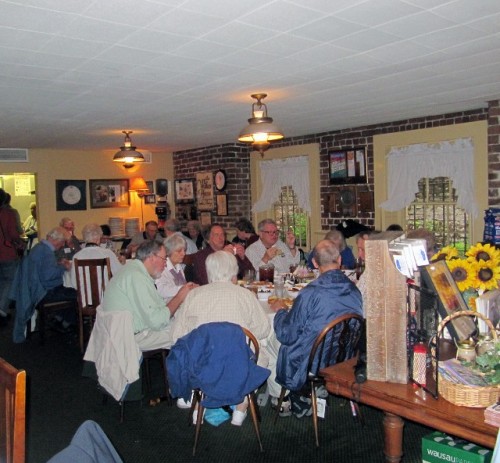 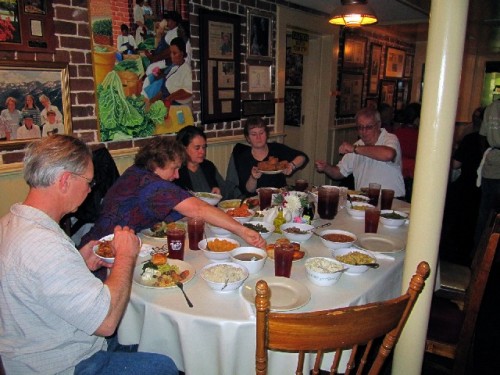 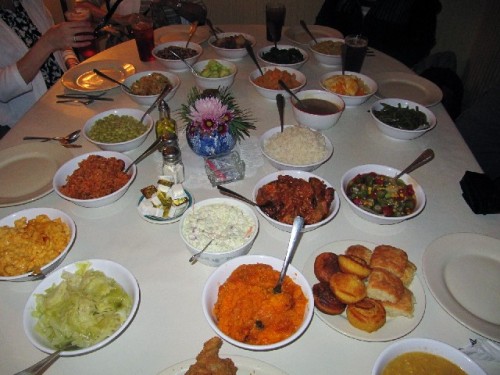 Some 25 dishes on the table. 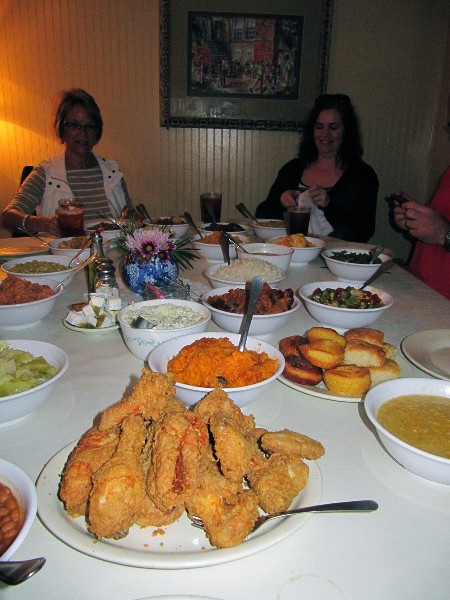 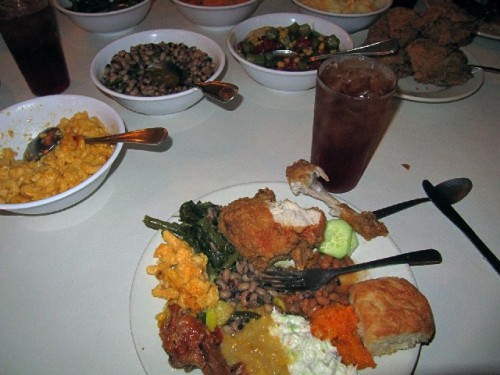 A bit of everything on the plate. 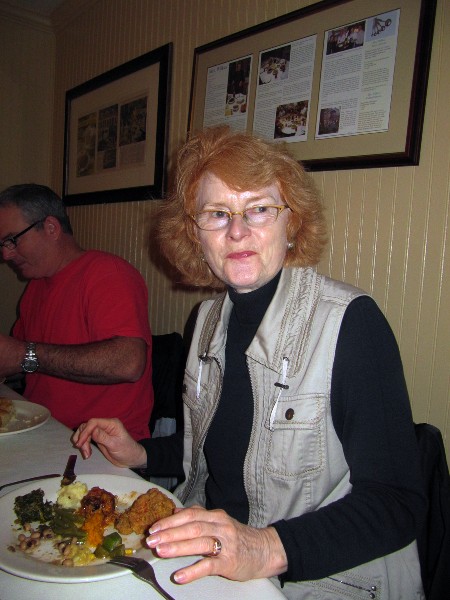 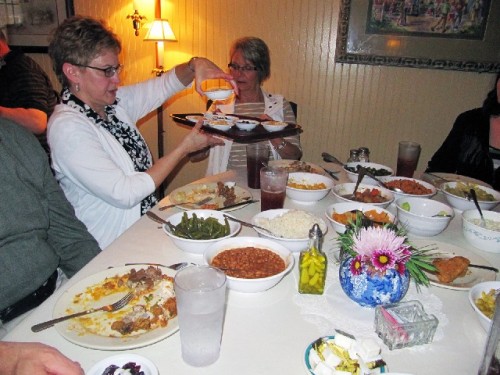 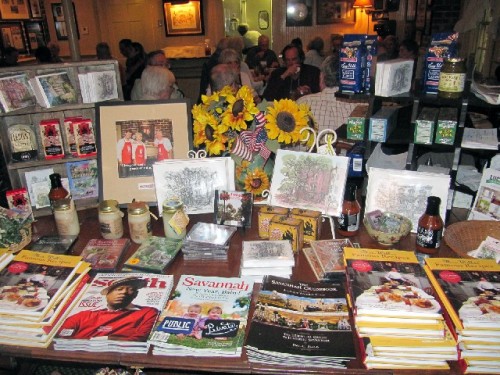 A table of Savannah souvenirs.

No visit to Savannah, Georgia is complete without lining up for a family style lunch at Mrs. Wilkes' Dining Room.

Famously, President Obama dropped by to sample the fried chicken during a campaign swing.

In 1946 Sema Wilkes opened a boarding house in a spacious former mansion in a by then run down residential area of the gracious Southern city.

Urban renewal would later nip away at some of the famous squares. The city was spared in the Civil War during General Sherman’s scorched earth march to the sea. Theories vary as to why he didn’t torch Savannah. One notion is that he was dissuaded by a mistress. Another that it was needed as an intact major port for military supplies.

Gradually Savannah declined like a romantic sequel to Gone With the Wind.

The city was in transition when Midnight in the Garden of Good and Evil a non-fiction work by John Berendt was published in 1994.

He spent several years of research tracking down information about a sensational murder trial. We heard him speak during Wordfest at The Mount on a panel of travel based authors. He signed our copies of Midnight and the wonderful book on Venice, The City of Falling Angels, 2005.

Having both read Midnight we decided to make it the destination and turnaround point for a multi-stop road trip. Decades earlier I had passed through during an annual event of driving my Mom home to Gloucester from winters in Palm Beach. We turned it into week long adventures and I got to plan the itinerary. But that visit didn’t include Mrs. Wilkes'.

Berendt discussed the social strata of indigenous families going back generations as well as the born again yuppies that bought and renovated the run down mansions. It created a culture clash as he duly noted making the rounds of parties with the first families and those of the nouveau riche. Because of economics there are more of the latter than the former.

In 1994 he noted the presence of the controversial, for profit, family owned Savannah College of Art which has acquired a substantial amount of real estate. In the field SCA is notorious for its non tenure track, short term contracts. The college seems as focused on the bottom line as educating future artists and designers.

Knowing that lines for Mrs. Wilkes' can often last for a couple of hours we arrived around 11:30 AM for the lunch that has a last sitting at 2 PM.

During high season that would mean being out of luck. Eager diners arrive no later than 10 AM to be assured of a seating.

It was the end of February so it wasn’t that long before we were shown to the second of two dining rooms. There we joined a group of strangers at a large round table. Rather quickly we engaged in a lively conversation comparing travel adventures with fellow pensioners. Who else is on the road at that time of year?

We were a bit early for the floral glories of spring but also spared the prostrating heat of summer. Imagine back in the day before air conditioning?

That meant a lot of iced tea.

Which was passed about the table in pitchers. It took a while to get some non-sweetened.

In all something like 25 passed around. For the most part, they were every possible variant of bland, under seasoned, Southern style vegetables.

To get the full range of tastes you put a bit of each on your plate.

It’s the heaping platter of fried chicken, however, that puts a smile on your face.

With seconds if you want it. Although a lot of food goes to waste.

Considering that the place is packed every day at $18 each the conspicuous consumption doesn’t impact the bottom line.

That’s a lot of food for lunch. Like year round Thanksgiving with a table of perfect strangers if you are so inclined. We had soup and crackers for dinner.

Overall there was nothing spectacular about the home-style cuisine.

Oddly enough it’s exactly what we paid for the evening buffet at Paula Deen’s three floor, tourist trap Lady and Sons. The difference is that the similar dishes come fresh to the table at Mrs. Wilkes' and who knows how long they sit at Deen’s buffet.

When it comes to the crispy fried chicken test, for example, Mrs. Wilkes wins hands down. Her mac and cheese is pretty awesome. Plus the family style dining of Mrs. Wilkes is cozy and convivial. Particularly when compared to the cattle car cacophony of Deen’s joint.

For both restaurants we can now say been there done that.