At Lincoln Center in New York 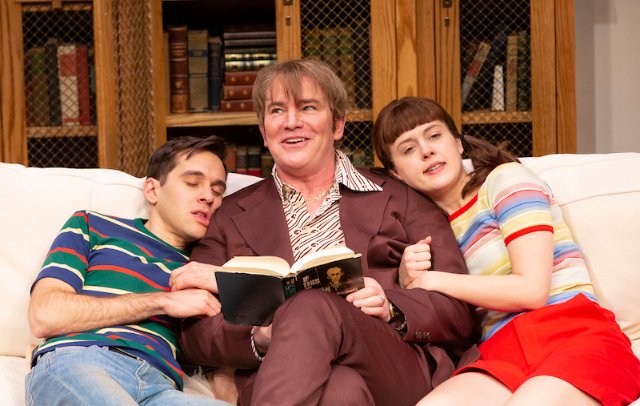 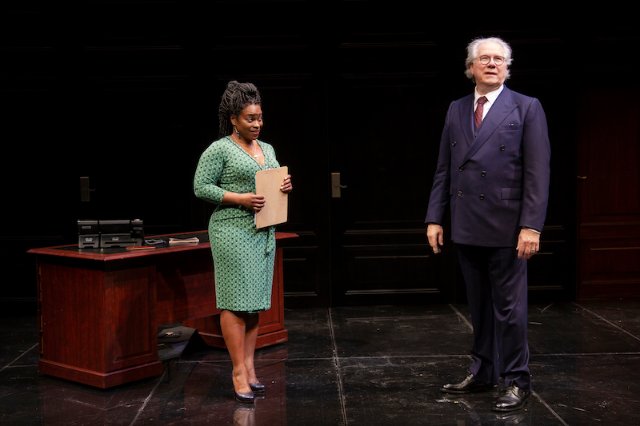 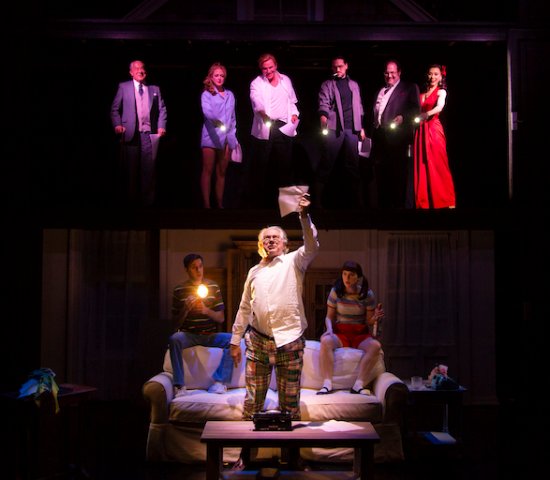 An electrocuted lobster. A Magritte painting come to life. A child pornography ring. The book and movie, Jaws. A crossword puzzle clue. Roman Polanski, Alfred Hitchcock, Walt Disney back from the dead. Samuel Beckett’s desk (perhaps). More references to Jorge Luis Borges, the Argentine writer, than necessary. (He is considered one of the fathers of magical realism, which may explain his presence in this surreal outing.)

John Guare’s latest play, Nantucket Sleigh Ride, is being staged in a world premiere at the Mitzi Newhouse Theater at Lincoln Center, directed by Jerry Zaks. It’s a farce, a puzzle and a jumble of pop culture references with a lot of laughs, and may leave you feeling unglued. It’s all narrated by Edmund Gowery (John Larroquette), a one-shot playwright turned venture capitalist.

An early production of Gowery’s only play, titled Internal Structure of Stars, was produced by an amateur troupe in in 1975. Gowery was invited but didn’t attend the opening. A running joke throughout the play is that almost everyone Gowery talks to auditioned for or performed in that production.

Early in the play, in the present, a middle-aged pair of siblings visits Gowery. They bring him a copy of a book he once owned and wrote in: Labyrinths by Borges. They make a request of Gowery. Help them regain their memories of that childhood summer in 1975, when they were 9 and 7.

MAN: We have a hole where our memory should be.
GOWERY: You have happy memories or horrible memories. You don’t have no memories.
MAN: It’s just that summer that vanished.
WOMAN: The summer of 1975.
MAN: That summer on .
WOMAN: The doctor said we can’t go on with our lives until we fill in the blank.

Gowery owns a house in , which his lawyer Gilbert (Jordan Gelber) convinced him to buy as an investment. He has never been to , but now there’s evidence that a child pornography ring is being operated there and Gowery is suspected of operating it. He must go to to sort things out. He wants to take his girlfriend, the sexy Antonia (Tina Benko), to Nantucket, but she happens to be married to his lawyer, Gilbert, and they’re going to .

At one time, a former tenant wrote a series of children’s books while living in the house. His daughter Elsie (Clea Alsip), Poe and Lilac’s mother, starred in that first production of Gowery’s play.

Poe (Adam Chanler-Berat) and Lilac (Grace Rex) appear and reappear as adults or children as the play dodges from surrealism to reality, so you may never be quite sure where you are or when you’re there. Douglas Sills plays several roles, including Schuyler, Elsie’s husband and father of the kids; later he materializes as a cryogenic Walt Disney. Oh and McPhee (Will Swenson) is Elsie’s boyfriend and owner of the aforementioned lobster.

Larroquette seems to enjoy himself as Gowery, the narrator. Stacey Sargeant also shines as a cop and as Gowery’s secretary.

Director Jerry Zaks steers this whole story at manic speed. The second level series of doors (scenic design by David Gallo) may not slam but they are lighted and darkened at farcical speed as characters appear and disappear. The play runs just under two hours with one unnecessary intermission. Cut 10 minutes from the longish first act and Nantucket Sleigh Ride could be a 90-minute wonder.

Lighting is by Howell Binkley and costumes by Emily Rebholz. Mark Bennett gets credit for the original music and sound design.

The title is a whaling term that refers to what happens after a small open whaling boat harpoons a whale. The injured whale attempts to escape and the rope attached to the harpoon takes the boat along on a dangerous ride. Playwright Guare may be using the title to explain his plot line.

John Guare is best known as author of Six Degrees of Separation and The House of Blue Leaves. Nantucket Sleigh Ride is a revised version of an earlier play, Are You There, McPhee?, produced at McCarter Theatre at in 2012.

Nantucket Sleigh Ride runs through May 5 at the Mitzi E. Newhouse Theater at Lincoln Center, 150 W. 65th St., on the upper west side. Tickets and information here.