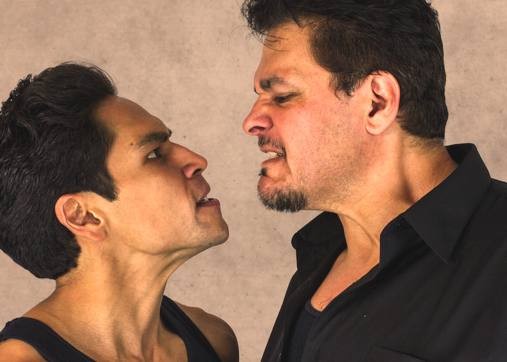 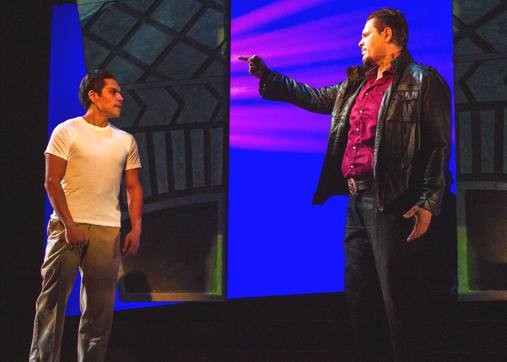 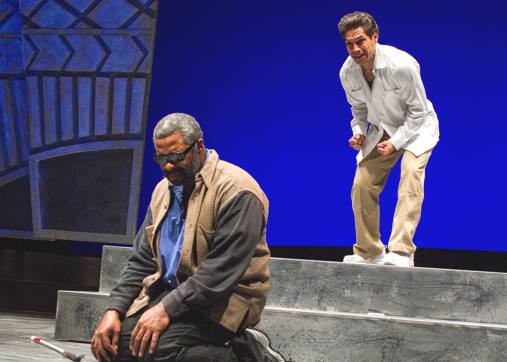 It’s a twenty-four hundred-year leap forward in time from the ancient Greek city of Thebes, to the barrios and prisons of 2015 Los Angeles But that is the leap in time that playwright Luis Alfaro is asking the audience to make in his new play “Oedipus El Rey”, now onstage at San Diego Repertory Theatre’s Lyceum Stage.

It’s not unusual for plays to be updated to fit various historical periods and incidents over the years. That’s how new material is created. When it comes to Western culture and theatre, the stories and myths begin with the Greek poets and writers. They were good; so good that Shakespeare shamelessly stole from them. In borrowing from the Greeks Shakespeare added his own story points, plot lines and style in order to make his plays and characters more relevant for his audiences. Some scholars claim Hamlet and Oedipus are distantly, theatrically-related.

The play masterfully directed by artistic director and co-founder Sam Woodhouse, begins in a California prison in the present. The story centers on six Chicano prisoners (the Greek Chorus who play other speaking characters) who deliver the back-story; preparing the audience for what is to follow. There are chunks of dialogue in Spanish sprinkled throughout that lends verisimilitude to the contemporary story, and a nice touch.

In ancient Greece, one didn’t mess with the Gods who ruled man’s fate. In today’s society one doesn’t mess with barrio life and the social rules that govern that community. When a Chicano Oedipus, once out of prison, challenges the barrio order and sets himself above the rules, we follow the arc of his fall, and see him accept his fate. In between his fated birth and his tragic downfall, issues of murder – he unknowingly kills his birth-father, marries his mother, and sires four unnatural children which become the literary epitaph of Oedipus El Rey/Oedipus Rex.

Monica Sanchez, is equally compelling as Jocasta, the birth-mother of Oedipus who later becomes his unwitting wife and mother of their four children. On stage, make-believe incest can produce a lot audience seat-squirming. In the extended scene where Oedipus and Jocasta’s sexual attractions boil over, one could hear a pin drop. No exhaling breaths were heard from the audience until the scene ended. Director Woodhouse choreographed that seven minute intrinsic scene with great skill and good taste, and was always sensitive and caring to the feelings of his audience, as well as to his two star actors performing totally in the nude.

The creative team led by Woodhouse, renders a spare but functional set design by Yoon Bae, which is complimented by a lighting design by Lonnie Alcaraz that tastefully lights the nude scene. The sound design of prison regimen is by Larry Stein. The costumes of Jennifer Brawn Gittings are appropriate and are visually eye catching. The action and fight scenes by Fight Choreographer George Ye are especially effective and convincing.

The combination of an accomplished playwright like Luis Alfaro, who knows his milieu, and a creative and inventive director like Sam Woodhouse, who brings his personal vision to each project he directs, is a winning formula. It’s no wonder that San Diego Rep Theatre is entering its 40th year as one of Southern California’s leading urban theatres where their mission statement says they produce intimate, exotic, provocative theatre that nourishes and feeds the curious soul. Indeed they do.