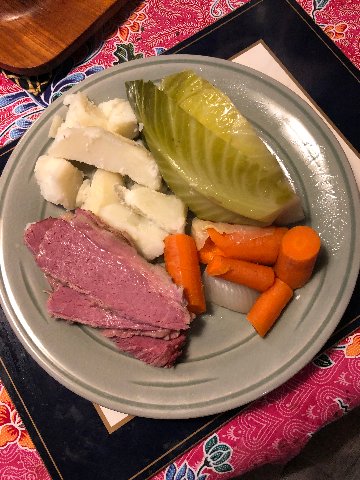 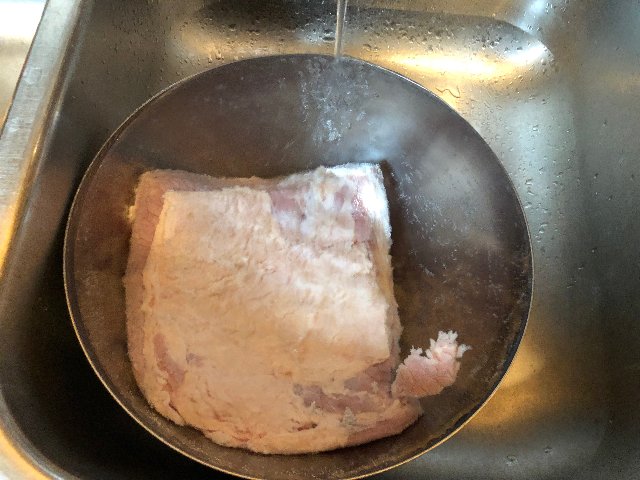 Rinsing the beef for about three hours. 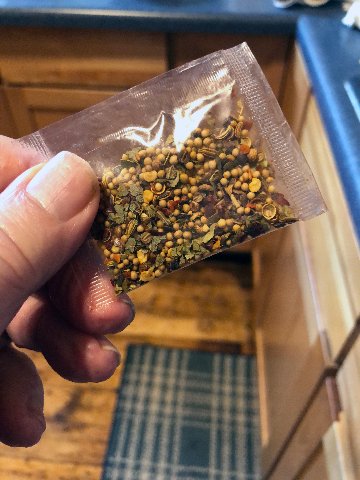 The flavor pack comes with the corned beef. 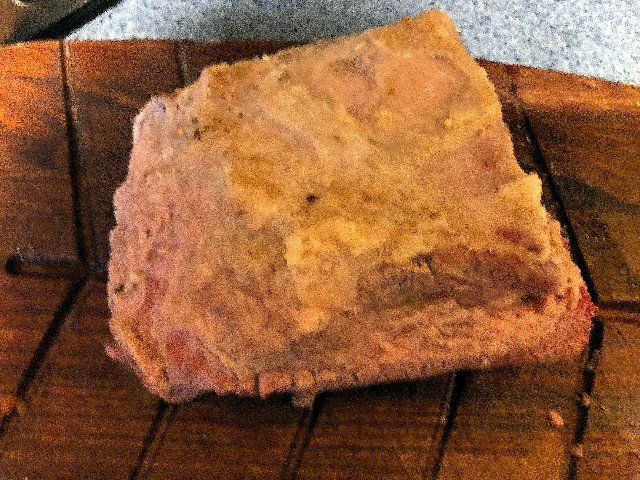 Cooked after three hours and set to rest. 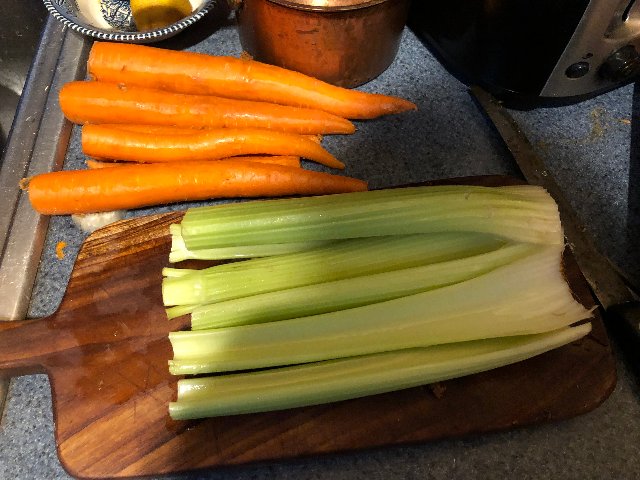 A nice head of cabbage. 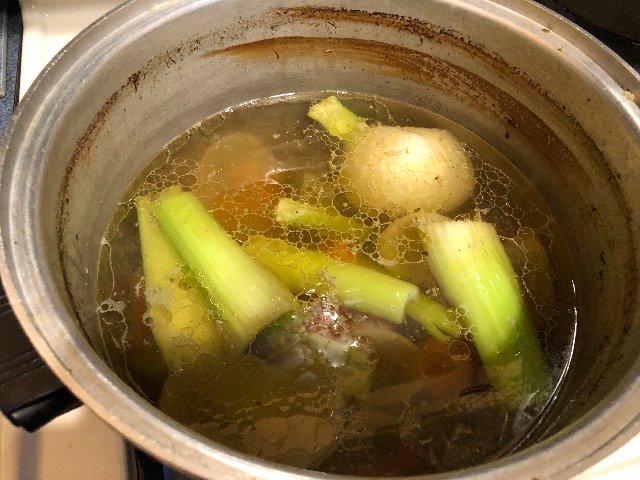 First the carrots and celery. 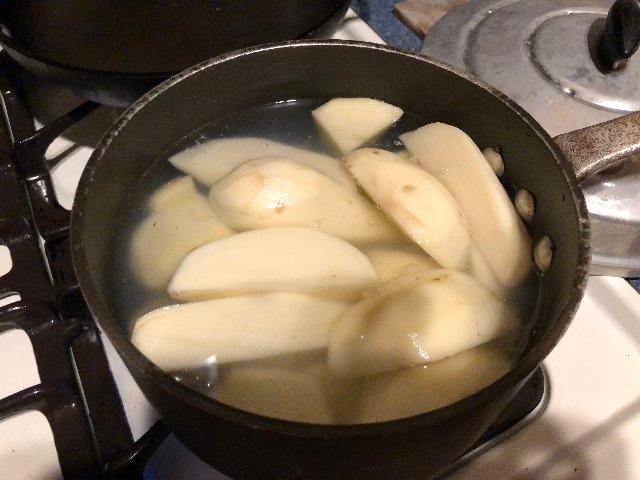 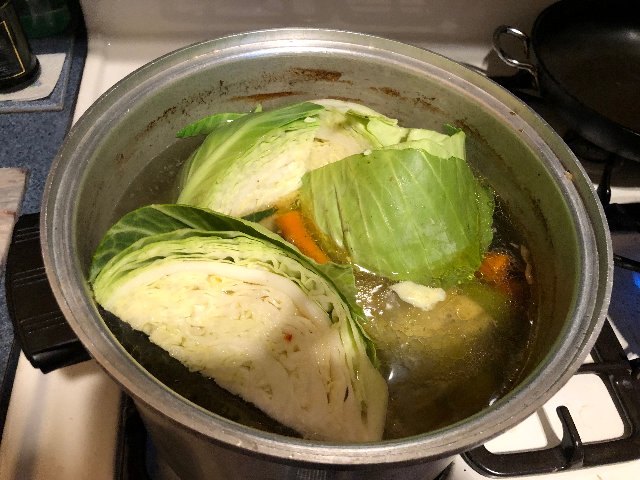 Cabbage goes in for the last twenty minutes.

On March 17, everyone is Irish.

That means corned beef and cabbage,

It was my Irish mother, Dr. Josephine Flynn’s favorite meal. Well, that and lobster washed down with a martini and what she called “a dividend.”

She was likely to make a boiled dinner any time of year. Often with ham instead of corned beef.

In general the corned beef is readily available around St. Paddy’s day then becomes more or less scarce. Or rebranded as brisket.

We got the beef a week early at Big Y just to be safe. There were several grades including relatively cheap “point” cut at $1.99 a pound.

There was sticker shock when I selected a four-pounder at $5.99 a pound. I bought another for the freezer to make barbecued brisket for another time.

The irony is that the traditional meal was basically peasant food. The vegetables; carrots, cabbage, parsnips, potatoes were the end of the root cellar just before spring planting. Farmers corned their own beef in barrels of brine.

So there was a natural rhythm to the meal that came to signify an Irish holiday. It turns out that the saint wasn’t even Irish. He came from France to convert the heathen Celts and for a sidebar, expel the snakes. It’s not clear whether he was the first to brew Guinness. Saints preserve us.

At least, for 49 cents a pound, the cabbage was cheap. Some claim that it’s the best part of the meal. Though most gringos don’t know how to cook it and it comes out as mush.

At the checkout counter I got a high five from the bagger. “I just love a boiled dinner,” she said. I asked the cashier if she planned on one. “Of course,” she said. “I’m Irish.”

Well my dear, aren’t we all. Including the current president of the United States of America. The last guy we can blame on the Scots. Which is to say an entirely other kind of Celt.

Just to be fair, during a meal that took all day, I poured myself a generous drab of single malt.

There are some tricks to make a perfect meal which is my delight to share with you.

It started around 11 AM. That’s when I opened the package, saved the flavoring packet, and put the beef in a bowl. For about three hours I let a slow stream of tap water  rinse and desalinate the beef. That results in a more tender and sweeter meat.

Around two or three it went into the pot. The plan is to low boil for at least two and a half hours, I had a lie down so it was around six that I took out the meat and added vegetables. I tested a slice and it was just about perfect.

When you boil the beef add the flavor packet. Basically, it’s pickling spices. I added some pepper corns, a halved onion, as well as four bay leaves. Gradually the aroma filled our loft.

Having set aside the beef I added carrots and celery to cook for about twenty minutes. For the final twenty minutes I added a large cabbage cut into wedges. This filled the pot and I added some water to cover the veggies.

Separately, Astrid peeled, cut and cooked the potatoes. That kept starch out of the broth which we have saved as stock for cabbage soup. Because we had soaked the beef the water was not excessively salty while full of beef and vegetable flavor.

Most importantly the veggies were absolutely perfect, and the cabbage was savory and tender.

A right fine meal it was it was. The best news, we'll have it again tonight, tonight.

Hopefully, with enough meat left for a Reuben sandwich. Let us hope and pray, praise be to Mary. Begosh n’ begorrah!