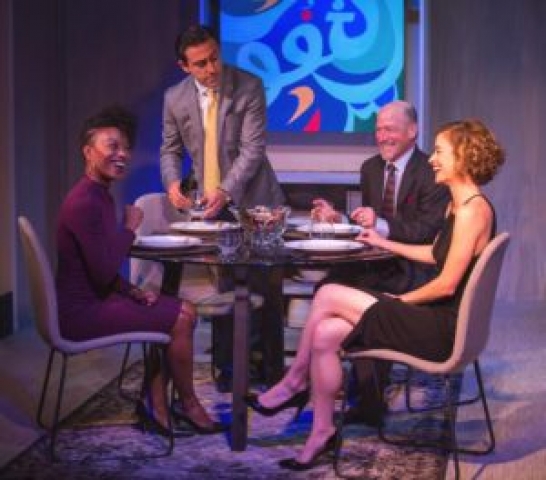 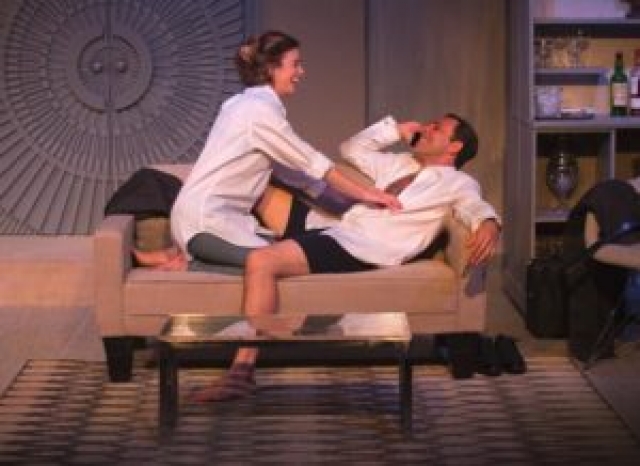 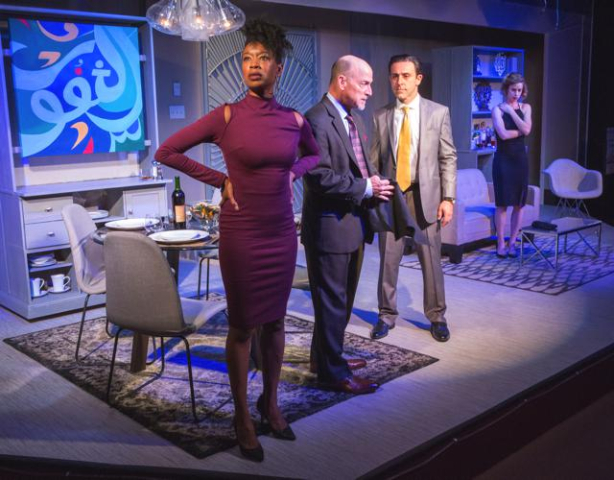 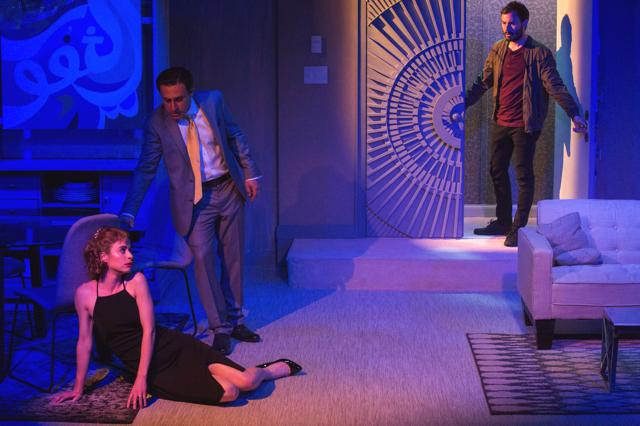 Playwrights can get away with a lot when it comes to biting social discourse when those verbal exchanges are in the form or comedy or satire.  Remember ‘God of Carnage’? Yazmina Reza’s blisteringly funny tale of four seemingly-intelligent adults who meet to sort out a schoolyard incident involving their young sons, only to have the meeting explode into hand-to-hand verbal combat when a casual remark sets off a firestorm of recriminations.

Playwright Ayad Akhtar takes a more dramatic approach in his searing drama “Disgraced”, now on stage at CV REP, in Rancho Mirage.  Akhtar explores the dark underbelly of the politically correct subject matter of anti-Semitism and Islamaphobia that is always simmering just beneath the surface of social discourse.  The problem is that the situation inevitably boils over later on, and in this case, dragging his five characters into open verbal warfare that will alter the lives of all involved.

“Disgraced”, staged and insightfully directed by Joanne Gordon, at CV REP, first premiered in 2011 in Chicago, then transferred to New York’s Lincoln Center, then on to Broadway capturing a Pulitzer Prize for Akhtar. The play was the most produced play in America in 2015. The drama written in 2011 is eerily prescient for events now unfolding in America in 2017.

The action set in New York‘s Upper West Side in 2011 and 2012 takes place over a nine month period.  The story centers round successful Pakistani-American lawyer Amir (Arash Mokhtar) and his painter wife Emily (Elizabeth Saydah). Emily has been creating a series of painting with  Islamic themes.  At the urging of Emily and Abe (Kamran Abbassian) Amir’s nephew, Amir reluctantly agrees to offer “some assistance” to a local Imam who has run afoul of the law for comments the Imam made about the “9/11” attacks.

During a hosted dinner party for their friends Issac (Joel Polis), a curator friend of Emily’s who is producing a showing of her works at a fashionable art gallery in the upper East Side, and Joel’s wife Jory (Maya Lynne Robinson), a lawyer at Amir’s firm.  All settle in for an evening of cocktails, gossip, and a delicious dinner prepared by Emily. After consuming too much alcohol the conversation turns to office business talk and then to the hot button issues of the day: politics, religion, and whatever other alcohol-fueled, deep-seated feelings held by all, begin to rise to the surface.

Amir, a self-proclaimed apostate from Islam makes a case for secularism saying “The Koran is like one long hate-mail letter to humanity.”  Which prompts Issac to calm the waters with a sincere assessment saying “Islam is rich and universal (as viewed through his curator’s lens) part of a spiritual heritage we can all draw from.”  Amir reacts and admits to all …” to having felt some slight feeling of pride on September 11th.”  The dialogue produced gasps from the audience.  Now the stage is set for the incendiary narrative of infidelity accusations along with vindictive, hurtful charges by all.

“Disgraced” may be full of clichés, but no one can deny the talent and solid performances of the actors working on the stage. Sometimes the situations get overcooked with everyone yelling.  But, after all there are a lot of deep-seated feelings being hurled all about with each character making a case for his or her position.

There is another character, however, that demands our attention as well.  Abe Jensen, the nephew of Amir, played by Kamran Abbassian.  Abe is an alienated angry and bitter Muslim young man who tried to assimilate into American society, even changing his name to a more Anglo version of his birth name; but without success.  He gets to summarize (at least for me) the driving ideology and role that Islam hopes to play in the overall scheme of things on this planet. Abe’s speech near the end of the play offers a vexing harbinger, perhaps, of things to come, or things for thoughtful introspection as our secular society comes to grips with our diverse population.

The beauty of this powerful and insightful play lies in the potent performances of its talented ensemble cast: Arash Mokhtar, Elizabeth Saydah, Joel Polis, Maya Lynne Robinson, and Kamran Abbassian.   Each actor has their moment to shine, and there are many such moments As a side bar note: due to the relevance and sensitivity of the play’s subject matter, Artistic Director Ron Celona has arranged for a Q & A discussion with the director and the cast following each performance.  The opening night performance Q & A produced such audience comments as “We should all just follow the ‘Golden Rule’ in order to get along”, to “There is no simple explanation or one rule.  Life’s just too complicated”, to “This play made me think”, and lastly, “Prejudice is in our DNA.”  And who says Art doesn’t reflect life?

Resident Set Design wizard Jimmy Cuomo, never ceases to amaze on how he and his team continually solve all of the story’s set design challenges in such an intimate performing space.  His Upper West Side  apartment sparkles, and the front door design is proof that on stage doors can indeed, slam shut without making the walls shake.

Lighting Designer Moira Wilkie Whitaker’s clever design enhances the overall moods that the actors create on stage.  Aalsa Lee’s costumes are spot-on and eye-catching and sexy when the ladies are on stage.  Award-winning Cricket S. Myers, a Tony nominated Sound Designer, supplies the sound, and Karen Goodwin, manages the sound tech.  Making sure the back stage crew and scene changes are on point is Production Manager and Assistant Designer, Doug Morris.

“Disgraced” is now on stage at CV REP Theatre in Rancho Mirage.