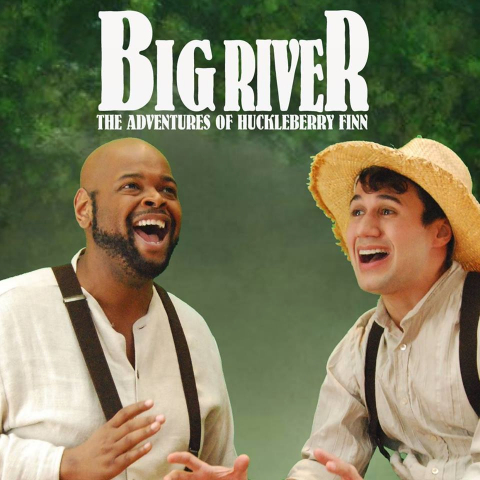 It’s easy to gloss over the musical’s flaws with the talent on display on the Broward Center for the Performing Arts’ Amaturo Theater stage through April 2.

“Big River,” based on Mark Twain’s beloved classic, “The Adventures of Huckleberry Finn,” is the kind of musical whose songs make you yearn for a cast album the way theatergoers long for a ticket to “Hamilton.”

The Bluegrass, Country, Honky Tonk and Gospel-flavored score isn’t just sung, but acted out by this large, first-rate cast. Its members never sing to show off their voices, but to convey the emotion behind the songs. They succeed mightily.

You’ll never confuse Miller’s lyrics with those of Stephen Sondheim or Oscar Hammerstein. Miller’s lyrics in “Big River” are often repetitive, corny and some songs don’t serve the story.

One could ax a handful of songs that add next to nothing and still preserve this faithful stage adaptation of Twain’s humorous, classic, wordy novel.

On opening night, not counting intermission, the production ran about two hours and 30 minutes, mainly due to the unnecessary songs (we don’t need to hear some unnamed fool tout his beloved state of Arkansas by repetitively mentioning the state’s name.) Again, it doesn’t serve the story, but unnecessarily lengthens the show. Likewise for the corny “Hand for the Hog.”

The patter-like song "Royal Nonesuch” is at least a nice tongue-twisting challenge for the actors, and they don’t miss a beat, eliciting laughs without begging for them.

There are strengths to this score. It would be hard to think of a more-timely song than “Guv’ment,” sung by Pap Finn, Huckleberry’s drunken bum of a father. Some of the nonsensical lyrics reinforce the uneducated man’s mode of speech. They also lambaste government, something people seem to be doing a lot these days.

Well, you dad-gum government
You sorry so 'n' so's
You got your damn hands in every pocket
Of my clothes.

In our Trumpian America, some may fear it won’t be long before the current administration has its hands too close for our comfort.

Performing the song is an unshaven Troy J. Stanley, looking unkempt with long hair and dirt-streaked clothes (the period, character-fitting costumes were designed by Rick Pena).

A wide-eyed Stanley, singing and speaking in a coarse voice and thunderously shouting at times, gives us an unpredictable Pap. He’s menacing one moment, sarcastic and showy the next. The actor also imbues Pap with a shred of humanity and vulnerability when the character feels shameful.

While the less-than-eloquent lyrics in “Guv’ment” are character-revealing, that’s even more true with Huckleberry’s “I, Huckleberry, Me” -- a song in which Miller makes the lad’s traits clear. The carefree, mildly defiant melody matches the character-defining lyrics.

Ricky Cona, a college graduate with a boyish demeanor, could pass for Huckleberry’s age. He is nimble on his feet while singing the song with a free-spirited, unapologetic aura.

Cona imbues the boy with determination, a sensitive charm and just enough mischievousness to convince us he’s a kid. The young actor’s slanted eyebrows deftly conveys a variety of feelings, from innocence and curiosity to concern as Huck struggles through his inner conflict. Grandmothers in the audience will probably want to ascend the stage and pinch Cona’s cheeks. His heart melting Huckleberry makes you feel how torn the boy is between preventing runaway slave Jim’s capture and revealing his whereabouts.

One cannot blame Huckleberry for his racist attitude and use of the “N” word. He was brought up during a time when slavery and that word were as commonplace as words we use everyday today. There’s something particularly heart-tugging about an innocent youth struggling with his conscience and, through his good-naturedness, realizing an injustice is taking place. All this comes across clearly in Cona’s performance, which further endears us to Huckleberry.

We find ourselves rooting not just for Huck, but Jim (an excellent Brian Maurice Kinnard), to unite forever in friendship. We’re made to realize, however, that though they’ve become good friends, they’re “Worlds Apart.” (the title of a gentle, hopeful song.)

As folks living in 2017, we at least like to think we’ve significantly narrowed that gap from the pre-civil war era in which “Big River” takes place. But we’re realizing that with today’s racial tension and violence, we, as people of different races, have practically reverted to being if not “Worlds Apart,” than too far apart.

That gap exists due in part to shady characters such as the “Duke” and the “King.” Sure, these men, in the novel and stage adaptation, serve as comic relief. But they also epitomize the type of people who would use blackmail and con their way into destroying lives for their selfish purposes.

Victor Souffrant, as the “Duke,” masks his evil intent nicely. The actor demonstrates a flair for the dramatic and endows him with a flamboyancy that offers plenty of comic relief. Sure, Souffrant shows off, but part of the humor in “Big River” and its source material rests in the fun it has with the theater and exaggerated acting. This story, you might say, is somewhat of a love letter to the theater.

There's nothing to love about “The King,” a ruthless con. There’s a cunning, menacing quality to Matthew Korinko’s “King,” a nice contrast to Souffrant’s buffoonish, showy “Duke.”

Kinnard shines as Jim, investing him with verve and a positive attitude. Kinnard’s Jim never broods or resorts to self-pity. His energetic rendition of the show stopper “Muddy Water,” a repetitive but spirited song, is filled with optimism and infectious joy. Kinnard also endows Jim with palpable heartache during a scene in which he talks about his children.

In this and other productions of “Big River” I’ve seen, Jim comes across as much more articulate than in the novel and Kinnard honors that. It would be tedious for an audience to sit through the entire play, listening to and trying to understand the dialect Twain gave Jim in the novel.

The aforementioned actors and the rest of this fine cast fully inhabit their roles on scenic designer Sean McClelland’s set, consisting of wooden boards and a platform that serves as the raft. Fog rising from the ground, coupled with Rebecca Montero’s lighting and at times blue backdrop, help to suggest a river.

This big body of water essentially becomes a character and a symbol. It’s symbolic of Jim’s journey toward freedom. But it’s also Huck’s journey toward liberating his conscience and coming to understand the attitudes of his time in a different light.

Dive right in to this ever-timely, entertaining and touching tale, told admirably by an impressive Slow Burn cast.