Coney Island is the Setting 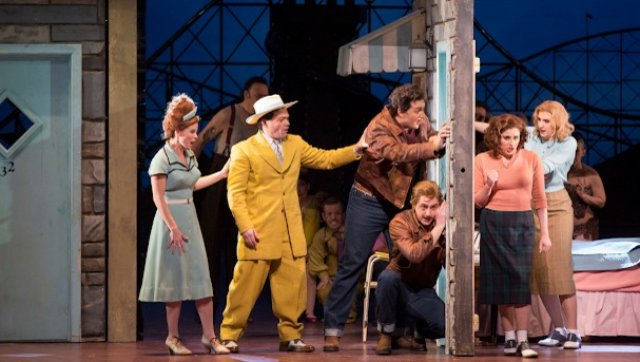 How do you solve the problem of presenting an opera that forces men and women into the stereotypes of the 18th century to a 21st century audience? If you're director Phelim McDermott, whose dazzling new Cosí fan tutte arrived at the Metropolitan Opera on Thursday night, you roll the score in glue, dip it in glitter, and hope for the best. Mr. McDermott's staging is a co-production with the English National Opera. It moves the show to Coney Island some time in the 1950s. The effect is sweet, sugary and yet strangely empty, like substituting cotton candy for your dinner after a night out on the Boardwalk.

In Mr. McDermott's update, the quartet of lovers (two sisters and two sailors) are on Coney Island for their vacation, staying in the (presumably) boardwalk-adjacent Skyline Motel. When the two fellas' boasting gets them into trouble in a local lounge, a mysterious, Mephistophelean stranger (Christopher Maltman) offers to put them through the romantic wringer. He orders these two callow youths to disguise themselves and trade partners and see whether their women are faithful. He is helped by the quick-witted Despina (Broadway star Kelli O'Hara) who is reduced here from being the sisters' pert, rebellious servant to a convenient motel chamber-maid.

Despite the best efforts of conductor David Robertson and the chorus, the last and least of the three Mozart-da Ponte collaborations remains a problem at the Met, where the cavernous yawn of the theater threatens to engulf what is essentially a tiny, intimate work. Despite being confined to three motel rooms for much of the first act, (maybe the smallest sets ever used on this gigantic stage) all the performers seemed a little overwhelmed by the sheer size of the house they were singing into. Worse yet, each of these young singers seemed a little small for the parts they were playing. Of the quartet of lovers, only mezzo Serena Melfi excelled, plumbing the sensual depths of Dorabella's lower range in her second act scenes.

As Fiordiligi, Amanda Majeski navigated through the fearsome straits of "Come, scoglio" and came out relatively unscathed, despite some awkward high notes and one yelp over a particularly torturous interval. (Mozart, apparently wrote this aria because he disliked the soprano in the original cast, so that's on him.) What really hurt matters was McDermott's over-direction, which included much mugging and slamming of motel doors. In Act II, she had the evening's best moment, singing "Per pieta" from the gondola of a floating balloon car, high above the stage. This lovely image, accompanied only by the silent carnival strongman (the wonderfully named "Titano Oddfellow") operating the ride, was the evening's best image.

The two male leads were bland and inoffensive. And thats fine but more should happen when they disguise themselves (as a pair of pompadoured Brooklyn "greasers") and switch partners. Baritone Adam Plachetka is a good comic actor, he brought a sleazy menace to the disguised Gugliemo which played uncomfortably in the claustrophobic motel set. As Ferrando, Ben Bliss had some lovely vocal moments bit appeared overwhelmed by his surroundings and lacked palpable chemistry with both female leads. Maltman, who was given a Pagliacci-like introduction which made it hard to hear the Overture, barked his way through the role of Don Alonso, and wore the two ugliest suits ever seen in a Mozart opera.

As for O'Hara, she mugged and warbled her way through Despina, but her schtick seemed thin and overworn as the evening progressed. Sure, it was a good idea to introduce her as the quack doctor with a big steam-punk powered magnet machine but having a poster with an image of her in her disguise displayed on the stage for twenty minutes beforehand did nothing more than the joke. Her Act II bit as a Texas cowgirl "justice of the peace" was just annoying, and her rootin'-tootin' dance routine with two little persons was...well, a thing that happened. Let's move on.

Much will be made of the unusual cast of supers in this opera: all carnival performers and sideshow attractions of some skill and esteem. There's a tattooed strongman, a pretty good fire eater, two sword swallowers and a lady with a medium-sized Burmese python. However, for much of the evening, these performers stood around onstage with very little to do other than push the scenery and props: the teacup ride, the tunnel of love, the sideshow banners) back and forth, and by the end of four hours they seemed under-utilized and bored. (Reprinted with permission from Superconductor.)