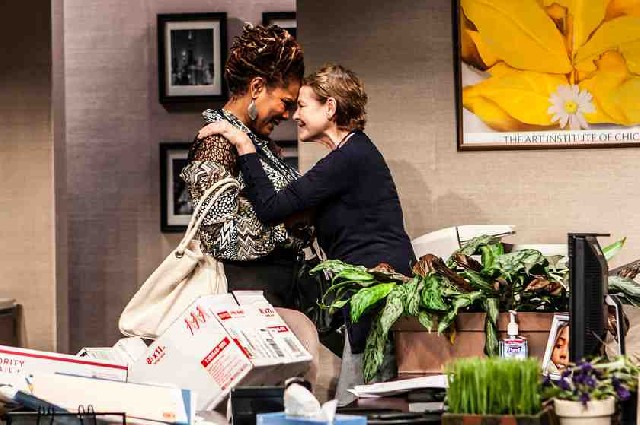 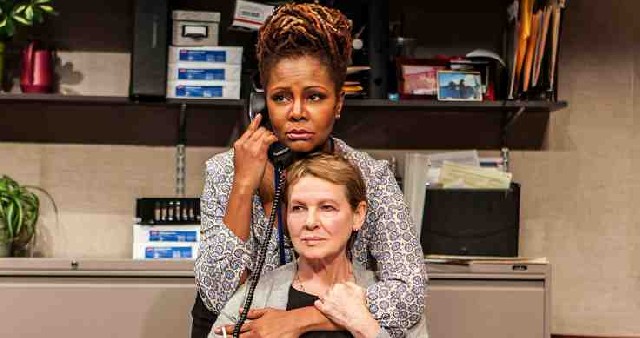 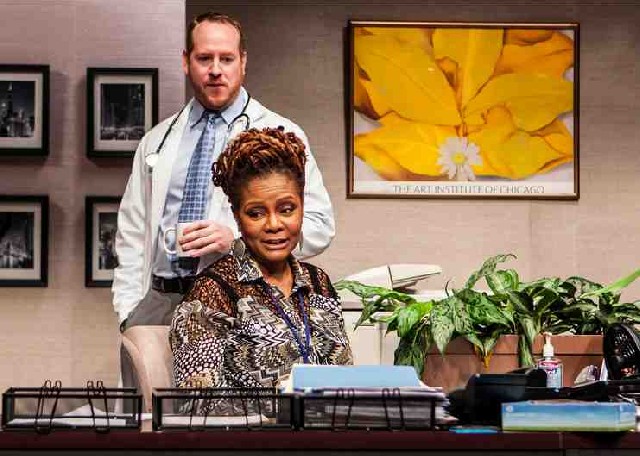 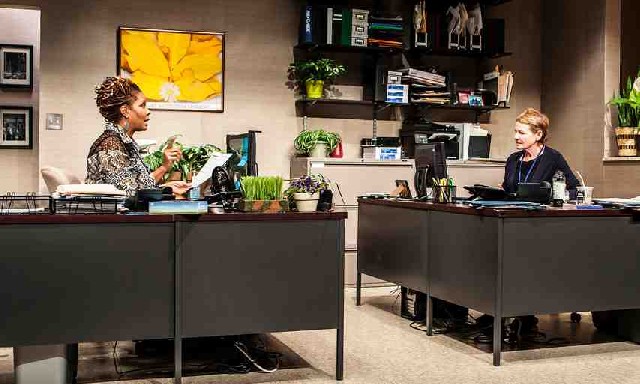 Rasheeda Speaking revolves around the seemingly timid Ileen, who has worked in a surgeon's office in Chicago for eight years.

Around a year ago, the surgeon, Dr. Williams, hired another officer worker.  In a gesture of openness and to enhance diversity, but also out of the goodness of his heart, he selected Jaclyn, a African American who appears to have spent years locked up in xerox rooms.   Now he is ready to can her, or move her on, or move her back to the xerox room.

A bad decision, it turns out.   Meeting on the morning of Jaclyn's return from a five day sick leave, Dr. Williams enlists Ileen to help him keep a record of Jaclyn's transgressions and failings so that he will have ammo for Human Resources.

Clearly Jaclyn smelled danger when she took sick leave, because she returns loaded for bear.   She went to doctors and complained about anxiety caused by toxic air in the office.  The physiological effects have been recorded in her medical records. Inputting insurance forms has sharpened her attack.  If she doesn't make it through her discrimination defense, she can fall back on disablity.  Jaclyn well knows the ways of the system.  Tonya Pickins gives us Jaclyn, wily and ribald.

Playwright Joel Drake Johnson provides op[ortunities for reverses of mood and method often.  Pinkins is so gifted, she U-turns a momnt's hesitation.

Ileen has been appointed office manager (of the two woman office) in Jaclyn's absence.  The brilliant actress Dianne Wiest gives us a fluttering, tip-toed woman who is waving in the wind.  She wants to please her boss, Dr. Williams, when he solicits her support for Iaclyn's removal, but she also counts Jaclyn her friend.

When Jaclyn returns promptly to the second, having hovered at the office entrance. The ugly dance begins.  She is going to stay in this office no matter what.

Pinkins portrayal is in furious and broad stroked, as she twists and turns in anti-discrimination as well asher own discriminatory acts.  At first she is funny and clever, but scene after scene she subtly erodes Ileen and becomes cruel.  Tit for tat.  A patient suggests this is revenge for slavery.

The outcome of the action is not in doubt, and so Jaclyn is predicable, where Ileen is more interesting in the forms of firmness she takes on.

The doctor starts in flattened form, but he is no secondary character.  His decision to get rid of Jaclyn propels the action.  He is the one who wants to avoid censure by the HR department and future law suits.  Had he been more Machiavellian at the start, his shock over the outcome would have been more dramatic.  Darren Goldstein, who has performed in Williamstown, is first-rate.

At the end I was less surprised than mad.  Life in offices today can be stifling. Political correctness may be the death of us all.  You felt its pall in as Rasheeda speaks.

In a wonderfully engaging turn as the patient Rose, Patricia Connolly turns with Jaclyn as she moves from plantation slave to the new office manager.

Cynthia Nixon, familiar to all in her Sex in the City roles, brings out the best in her cast.

The set divided between neatnik and a chaos of insurance forms ready to be inputted.  The entrance is orderly.  The doctor's office is off down the hallway where a Seurat print, the Big Bowl Island,  is suggested.  Lighting by the great Jennifer Tipton is most striking in its absence during time changes.

The playwright Joel Drake Johnson is a regular at Steppenwolf in Chicago and a welcome new figure in New York. This is a gripping evening of theatre that even brings in Ferguson.  It makes you sit up.  Or rather, ask your neighbor to take your back.