A Staple of Off Broadway 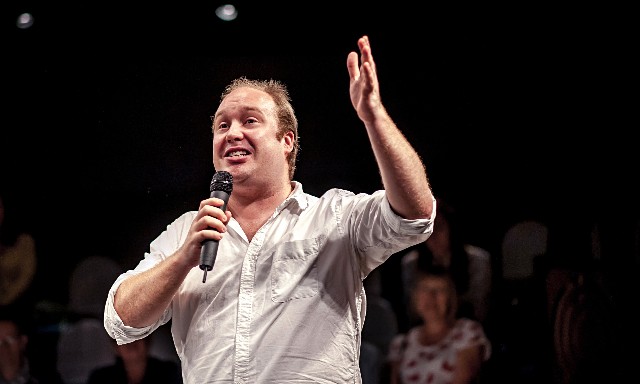 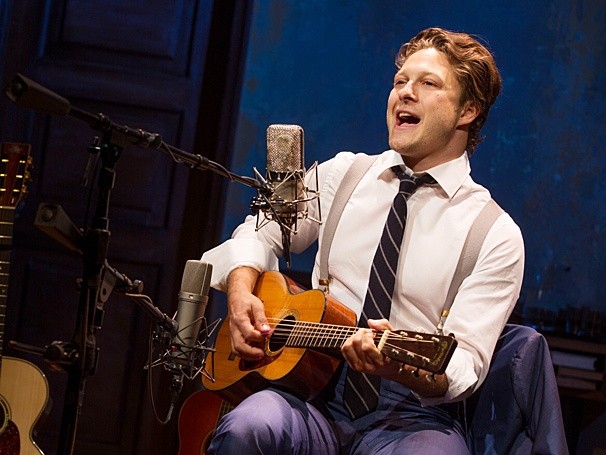 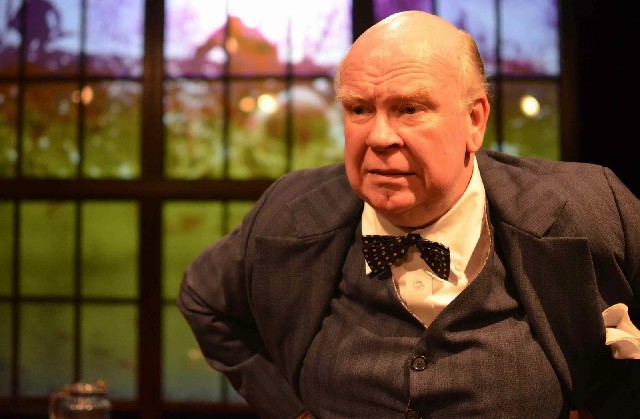 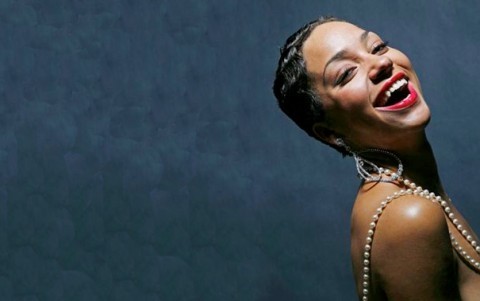 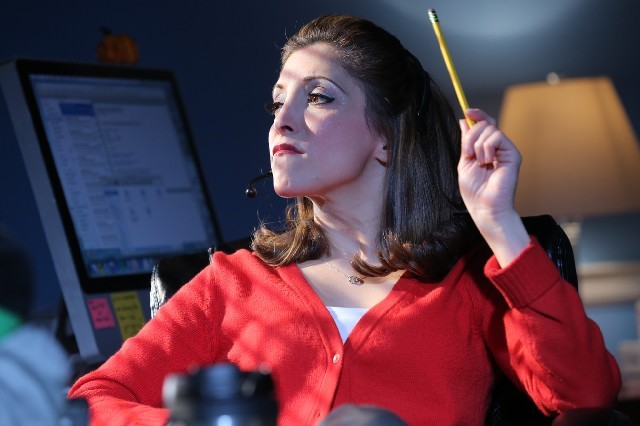 Solo shows, especially here in New York City , are a big thing. Big enough for New York City to have the world’s largest annual international festival for solo performances. Produced by United Solo, the festival will be celebrating its sixth season on Theatre Row in the heart of the city’s theatre district from September 17 – November 22, 2015.

But solo shows happen all year round. At this very moment there seems to be a tsunami of one person shows flooding New York City ’s Off Broadway scene. And no doubt, more are on their way. Some are based on fictional characters, others on the real life experiences of the performer, and two on larger than life historical figures. Here we get Josephine Baker and Winston Churchill. Though none are self-directed, most all are written, co-written, or adapted by the performer, ostensibly offering the audience a more perfect fit.

Though “Every Brilliant Thing,” “The Lion,” and “Churchill” are the three plays being reviewed here I am also listing three other solo shows, only one of which I have seen, after these reviews just in case you want to take in one or more of these solos.

On the confessional side, with a light-hearted fictional bent, is “Every Brilliant Thing”, an interactive play where audience members are given a few minutes of fame, is pulling them in at The Barrow Street Theatre. Adapted by writer Duncan Macmillan from his own short story, with input, as the program says, by British comedian Jonny Donahoe, also the production’s star, we are humorously gifted, touchingly so, with a story of a young man with a suicidal mother who first tries kill herself when he is 7 years old. It runs thorough March 29.

Often it takes a comedian to tackle the downsides of life with a light touch, one that let’s the audience leave the theatre in one piece. And Donahoe, like a spider on drugs crazily traversing his web, or better yet, the conductor of an orchestra – in this case the audience – there is no stage per se just an small playing area surrounded on all sides by audience-filled chairs – does a bang-up job.

The performance starts before the performance, as the casually dressed and slightly overweight Donahoe, looking more like a stagehand than the star of the show, is seen passing out scraps of paper to selected audience members who are instructed to read them aloud when the calls out their number during the course of his story telling. I got one and passed it on to my date du jour.

The numbered sayings, selected from thousands that the writer amassed over the years, were originally written for his suicidal mother and left around the house.  Each slip of paper offered her (and us as well) reasons, ranging all over the place, from ice cream, water fights, things with stripes, old people holding hands, my new sleeveless top, to Christopher Walken’s hair, to go on living.

Along the way Donahoe narrates the story of a young, never named boy who may be a fictional character or perhaps Duncan Macmillan’s own life story. During the course of one hour the boy grows up, goes to college, falls in love for the first time, marries, and sets up house.

Interspersed throughout – it seems that he inherited his love of music from his father – are snippets of songs by Billie Holiday, Ray Charles, Etta James, Chicago, each commenting on the stage of life he is taking us to. Quiet appropriately, echoing his list of reasons to go on living is Julie Andrews singing “My Favorite Things” from “The Sound of Music.”

Another clever addition, and fun too, is Donahoe’s unerring talent for recruiting  the ‘just perfect’ audience member, to portray his father, an English teacher, a school guidance counselor, his girlfriend, and a veterinarian, in a touching scene, who had to put the child’s beloved dog to sleep.

Normally, I cringe at the very thought of audience participation. And I pray that I will not be selected. Alas, I must say, the story, coupled with Donahoe’s slow-in-coming, seductive charm won over both me and my erstwhile companion. With all of these reasons to live flying about, we left the theatre counting our own blessings. Not a bad thing!

“The Lion” is another confessional treat, albeit more seriously recounted. Beautifully written and performed with the sensitivity of a prayer, by musician, singer, writer, composer and performer, Benjamin Scheuer, the play, a roaring hit at the Edinburgh Fringe Festival, as well as the Manhattan Theatre Club and London’s St. James Theatre, is back in town again. Extended through March 29 at the Lynn Redgrave Theatre at Culture Project on Bleecker Street , it begins a national tour this August.

While Donahoe brings to life a character other then himself, the handsome Scheuer in a tight-fitting suit and tie outfit, singing his own songs, and playing six different guitars, offers up his own life, a kind of stripping in public performance that pierces our heart with a gentle knowingness rarely seen on stage. I could not help but think “Once” the 2012 Tony winner for Best Broadway Musical. Both plucked similar heartstrings,

“Like Every Brilliant” thing, also a boyhood tale, “The Lion” starts out with the experience of a child, works its way though a series of rude awakenings, and ends with a coming of age. While Donahoe’s play highlights the mother’s suicidal tendencies, it is Scheuer’s relationship with his father, one of love hate love hate love hare – Yes, emotions run high here – that form the backbone of the play.

Playing ribs to the play’s spine are Scheuer’s two younger brothers, his move to New York City , his girlfriend, and a number of sudden shocks that come out of left field.

The show opens quite tenderly with a song of love that recalls his joy, at a very early age, listening to his father, who made him his first musical instrument, a banjo made from a cookie tin, rubber bands and an old necktie, sing and play the guitar.

Such tenderness does not last long as his father given to rages, makes a happy life impossible for Benjamin. Perhaps the father, a professor in academia rather than a full-time musician is angry for his own musical life not lived, for he is forever punishing his son. In one cruel incident, for no apparent reason, seeing Benjamin   playing with his friend on the front lawn, he runs out and stomps his son’s water gun to pieces.

Except for six well-placed guitars, all of which Scheuer ends up eventually playing, the stage, left beautifully bare, allows Scheuer’s finely composed music and story-telling lyrics, for which he has won numerous awards, to register all that more deeply. Spoiler Alert - As painful as some of the story-telling is, he does dig deep, the ending, a new lease on life, so to speak, is breathtaking uplifting.

The year is 1946 and the 72 year old, ex-Prime Minister Churchill, the first person to be made an honorary citizen of the United States, having accepted an invitation to visit the U.S. by Harry S. Truman is seen giving a talk, in actuality a summing up of his life, to the students at Westminster College in Fulton, Missouri. It is here that he delivers his legendary “Iron Curtain” speech, a term Churchill coined. The two of them we are told, drinking Scotch along the way, arrived by train.

The Great Man’s story beings with his birth in 1874 at Blenheim Palace, the home of his father Lord Randolph Churchill, and takes us to the Royal Military Academy Sandhurst in Surrey where he had his education, to his military beginnings, his entrance into politics, and his ascendance to the office of Prime Minister which he held during the war years from 1940-1935, and again 1951-1955.

Along the way we are privy to snippets about his beloved nanny, his distant parents, his love of FDR, his defeat for re-election as Prime Minister, Neville Chamberlain’s and Joseph Kennedy’s advocating for some level of appeasement with Hitler, the support his loving wife Clementine, and his actress daughter Sarah. We even get to see him paint, a hobby he popularized.

I wish I could say that I was blown away by “Churchill.” I would even have settled for mild enjoyment. Sadly, I found play’s fact-filled script, which spent some two hours skimming the top of Churchill Greatest Hits, while hardly plumbing the depths of the man himself, more a term paper tediously delivered as a lecture, than an actual play.

The actor himself, try as he did, in his own affable way, even with a hat and a cigar bore little resemblance to the full-bodied, bulldog-looking Churchill that we are most familiar with. Though Keaton was more successful at emulating Churchill’s speech patterns, as well as his movements – he obviously studied his subject on film – he never got close to Churchill’s fiery oratory skills.

For a brilliantly portrayed and fully believable Churchill, both as written and acted, Dakin Matthews’ playing one of Queen Elizabeth II prime minister’s in “The Audience”, current playing on Broadway, is the go to Churchill of the hour. He actually steals the scene from Helen Mirren. And that is saying something.

Other One Person Shows:

Cush Jumbo who still is playing on Broadway opposite Hugh Jackman in “The River” just opened in her one woman show “Josephine and I" to rave reviews I might add, at Joe’s Pub at The Public Theatre. Written and performed by Cush Jumbo, and directed by Phyllida Lloyd – it premiered at London ’s Bush Theatre.

Here Jumbo plays both a British actress on the rise, as well Josephine Baler, the boundary-crossing, Paris-conquering, Africa-American chanteuse who was an international star for half of the 20th century.

For those who need a Josephine Baker (1906-1975) refresher, Baker was the first African-American performer to rise to international prominence. She was also a French Resistance spy and civil rights activist. Married twice by age 16, the flamboyant  Baker – she is known for her nude dancing – served as muse to Pablo Picasso, F. Scott Fitzgerald and Ernest Hemingway, who called her “the most sensational woman anyone ever saw.”

“Application Pending,” previously reviewed on this site, is currently running at the Westside Theatre through April 19. For two challenging fun hours we get to inhale actress Christina Bianco, in a hilarious and zany performance, as she tries to cope with a new and totally unexpected job change at work. Along the way, with great mimicry, we meet some 42 characters, each one more outrageous than the next.

The Man in the Woman’s Shoes:

In “The Man in the Woman’s Shoes” playing through March 14 at the Irish Arts Center – not reviewed here - Mikel Murfi, both the actor and script writer, treats us to the life of Pat Farnon, a full-time cobbler and an occasional farmer who is majorly adept at channeling the sounds of chickens, bees, birds, as well as a pig, dog, and a dying turkey.