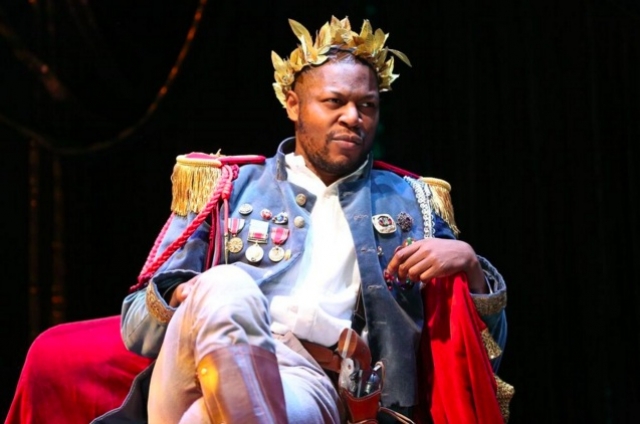 Obi Abili as the Emperor Jones 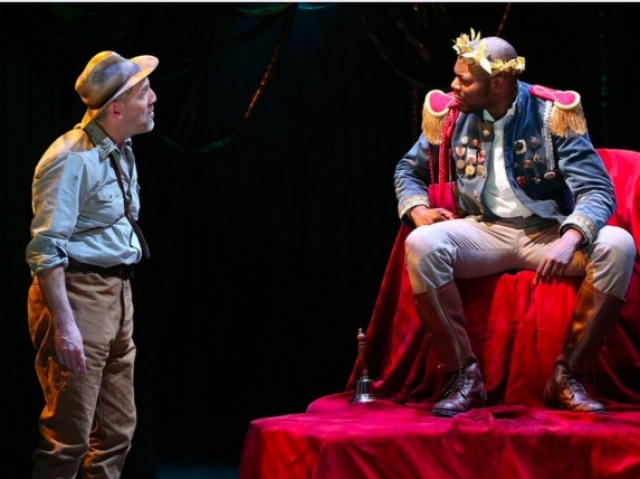 The trader and the Emperor. 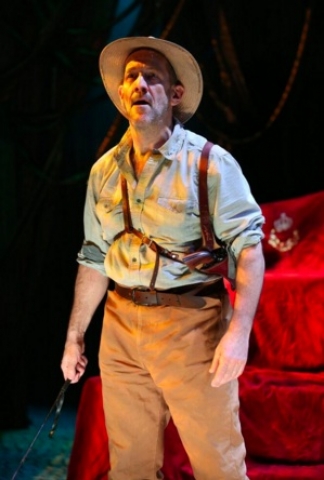 Andy Murray is unscrupulous, mean, cowardly and dangerous as Smithers. 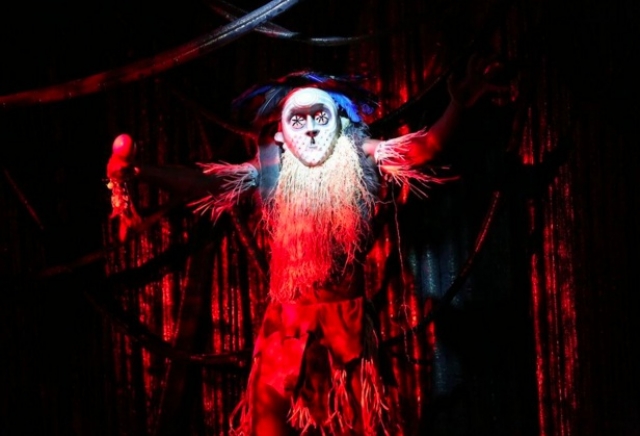 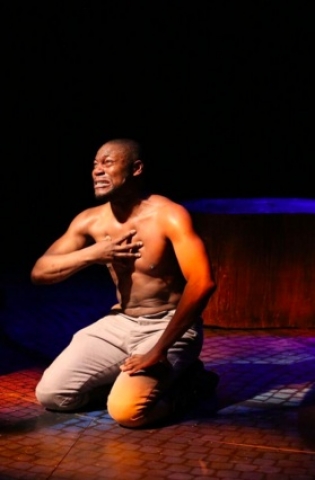 Trying to make peace with his maker.

The Emperor Jones is a powerful early play by Eugene O’Neill, made even more powerful by its flawless production at the Irish Repertory Theatre.

Obi Abili makes his debut with the company as Brutus Jones. Abili trained at the Royal Academy of Dramatic Arts and has appeared at the Globe Theater and Old Vic, as well as BAM in the US. All the wit, energy and anger the character claims for himself is dramatized by Abili in slithering, jolting gestures and subtle and roaring twists of language.

The ‘negro’ language of the play disturbed in early productions. Some producers tried to whiten it up. Paul Robeson, and several years ago, John Douglas Thompson at the Irish Repertory, have taken the words O’Neill wrote and made them lush and vibrant. While articulation may not be classic, the message is clear. If you are willing to do anything to survive, you can thrive for a while.

Yet, like all of O’Neill's leading characters, Brutus Jones has a fatal flaw and we hang on that throughout the play.

Opening in the Emperor Jones' ‘eye-smiting scarlet’ throne room in a West Caribbean Island, an old woman, bent at the waist, enters with an unclear mission.   She is scooted away by Smithers, a local white trader who cheats the natives. He can see that the natives are ready to depose their self-anointed leader. The household staff have all headed for the hills to prepare to take down the Emperor. The old woman is slow and last to leave.

The Emperor, a man of quick wit and at-the-ready intelligence, prepares to save his skin and sail to another island where he can live magnificently on ill-gotten gains stashed in a foreign bank account.

Riding on trains as a Pullman conductor he learned the ways of the rich. If you’re poor you’ll be hung. If you’re rich, you can get away with anything.

The brilliant set by Charlie Corcoran suggests a jungle by using lights and hanging vines. Puppets created by Bob Flanagan create trees that move like Duncan’s army in Macbeth. The hats on each of these tree puppets remind us of the Klu Klux Klan and the Grand Inquisitor. Easter Island masks are O’Neill’s Little Formless Fears.

As Jones gets Smithers’ warning, the slow beat of tom toms begins. Sound and music have created their ever intensifying beat and mixed it with the eerie sounds of wind and rustling undergrowth.

Eager and then frantic to leave the island, Jones is driven back into his mind and its history. He recalls working on a chain gang. He feels the sting of the boss man’s whip and so do we. Jones turns to kill the boss.   This is the instant at which he ran away to escape the inevitable justice meted out to poor men.

Silver bullets are the answer. He has one silver bullet reserved to kill himself if someone else threatens. “I’m de only man in the world big enuff to git me.” He can not find the food he has buried on his escape route. He is weak, dragging himself along, stripping away his belt and shirt.

In his mind, drugged by the humid tropical heat and the staggering will to escape, Jones experiences his life from the beginning. He is a slave on the auction block, a member of a chain gang, and a Pullman porter.

The captivating masks and puppets of Bob Flanigan, create these fantasy dreams of Jones’. Victorian puppet couples watch the auction proceedings as though it was a circus freak show. A masked witch doctor is replete with amulets and feathers. O’Neill wrote that scenes in which these characters appear were not to be naturalistic. In this production they clearly are not. Yet they are wonderfully evocative nightmares.

Director Ciaran O'Reilly treats the real and the unreal with the same even hand, which makes the downward spiral of the Emperor all the more powerful.

Jones has five lead bullets which will help him survive long enough to get to the escape boat. He meets a marvelous crocodile who he shoots down like David meeting Goliath.

In a final ironic twist, he is killed by a silver bullet made by the natives who would end his reign.

Rudyard Kipling’s The Man Who Would be King was published in 1888, Joseph Conrad’s Heart of Darkness in 1899. O’Neill’s play was written two decades later. They are all responses to the imperial experience.

Looking at the play today, it is easy to see a new imperialism around us. With the world divided between one percent who hold almost all the wealth and the 99 percent who have little, we may be living in an era of economic imperialism. If things continue this way, who will rise up to eliminate the would be emperors?

“Ain't a man’s talkin’ big what makes him big – long as he makes folks believe it? I talks large when I ain’t got nothin’ to back it up. I ain’t talkin’ wild. I knows I kin fool ‘em.”

“I know dis ‘Emperor’s time is sho’t. Dat why I make hay when de sun shine.”