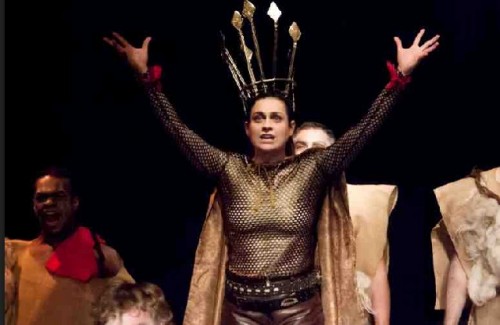 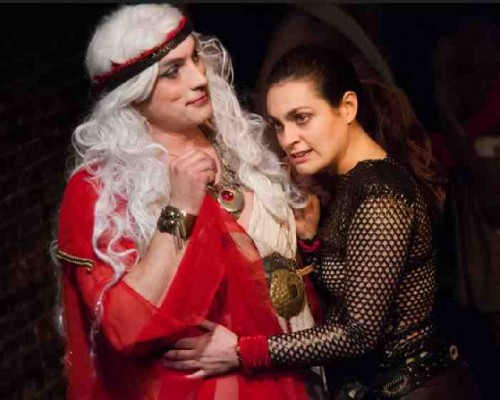 Love at first sight, at birth and in bed. 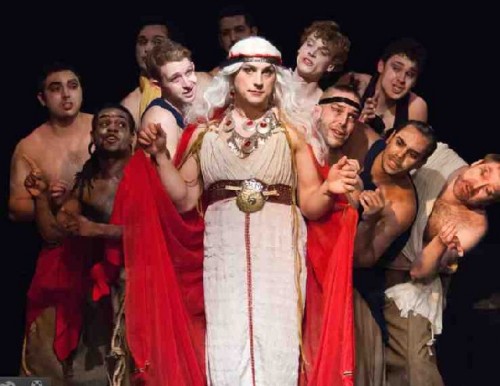 Oedipus Rex as conceived by the Faux-Real Theater Company is in fact true to the original, although the producers say "sort of."  A play in which Son kills Dad and then marries Mom with whom he begets half brothers and sisters provides latitude.  Even though Oedipus is played by an actress and Jocasta by an actor, the brew has already been mixed and turned upside down by the time the play starts.  The Faux-Real troop provides a classic take with a juicy wink.

The chorus stands out as star.  Each chorus member is very much himself, and yet the gestures and the shared rhythmic beats make them keep them one.

We get to meet each singular chorus member at the beginning as they pass around unfermented grape juice and grapes to the audience, while Sophocles gets the modern audience up to speed.  The audience in a Greek ampitheater knew every bend in the road of this drama.  Before the play begins we do too.

Masks do not distance the cast.  Nor does the face paint on some characters. Instead individuals are further defined and draw us in.  The First Floor Theater can't be more than 1/100 of any traditional Greek setting, but the chorus and actors, in addition to juicing us up, enter and exit by the highly raked stairs, swooshing by our seats in burlap skirts and togas, fringed with animal hair and whatever else might have been available.

Tony Naumovski is brilliant as Jocasta.  Delicately eyeing the discovery proceedings as the gods clamour for the murderer of Laius, her suicide when the truth is revealed is completely credible.  Stephanie Regina is a powerful Oedipus, strutting her stuff and then gouging out her eyes when his role in Laius' death and his marriage to his mother is revealed.

All the cast stood out, but particularly strong performers were Jason Scott Qunn as Tiresias, where again you can see a brush up close to camp, but getting only far enough to bring a smile.  Goken Gokcebag and Alejandro Santoni were both moving and suggestive in their roles as Messenger and Shepard.

The 'orchestra' is tucked into a balcony.  Percussion, flute, shruti box and violin, whine and tinkle like the Aegean Sea.

This brilliant classic treatment with an amusing, provocative edge makes the play tantalizing.  A great evening of theater.