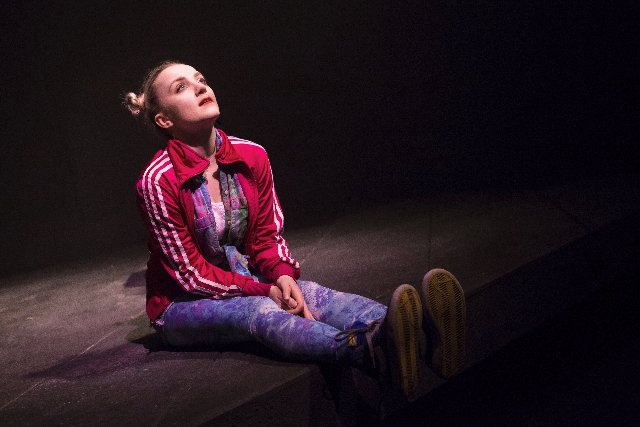 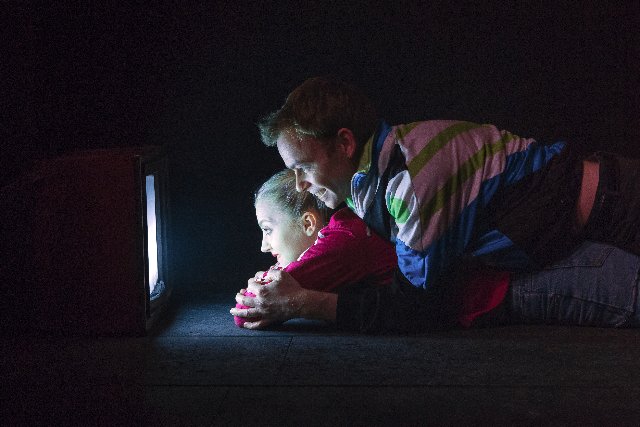 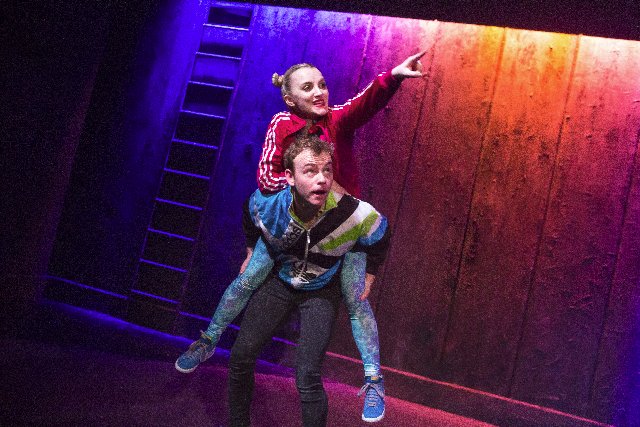 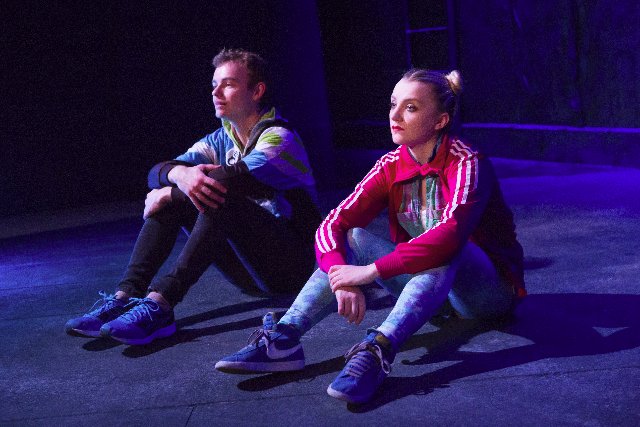 Every once in a blue moon, my mind is kidnapped by a play in which a great deal of what is being said by the actors—be it an accent, a foreign phrase, or a made-up language—no matter how hard I try to decipher what I am hearing, has words being delivered from the stage that are largely unintelligible.

Disco Pigs, Dublin-born Enda Walsh’s adrenalin-infused coming of age play which ran through March 4, 2018 at New York City’s Irish Rep, is a prime example of this phenomenon. For here, the play’s two energetic actors, as they feverishly run about the stage, spout a mindboggling torrent of baby talk, coupled with their own made-up language which includes oinks and grunts. Worse! All of the talk is delivered in a Gaelic brogue. I rest my case!

However, luckily and frequently in this play, the meaning of what is being said—by the actors’ movements, facial expressions, and visual emotions (much like watching a silent film without subtitles) nevertheless came to me at supersonic speed.

For those with short memories it was the 2012 Broadway production of Enda Walsh’s musical Once, a gentle and bittersweet romantic tale of two Dublin musicians falling in love, that put the playwright on the map for American audiences. Knocking the ball out of the park, that musical went on to win a staggering eight Tonys for Best Musical, Book, Director, Actor, Orchestration, Scenic Design, Lighting, and Sound. Walsh, in a number of interviews, has stated that “all of his plays are about some sort of love and a need for peace.” They are also “all effectively about theater, writing” and “routines… I see my characters as needing to proclaim and proclaim…and to what? You know, to what, construct rules and sort of mechanisms within their living room, but to what end? Only to try to escape them again and probably build more and more routines and patterns and all that sort of thing.”

The playwright has often suggested that what interests him “is about me actually getting through the day.” And indeed, the three works of Walsh’s that I did see, Once, Lazarus (2015) which he co-wrote with David Bowie, and the 22-year-old Disco Pigs, which won awards at the Dublin Fringe Festival (1996) and the Edinburgh Festival (1997), follows these same ideas.

Disco Pigs takes place in Cork, Ireland. It is the mid-nineties, and we find ourselves alone with the self-nicked named Runt (Evanna Lynch) and Pig (Colin Campbell), both amazingly versatile actors. It is their birthday, and Runt and Pig are reenacting being pushed out into the world from their mother’s uterus seventeen years earlier on the same day and in the same hospital as each other.

For the next 75 breathtaking, roller-coaster minutes, we follow Pig and Runt in their aggressive and spontaneous birthday wildings, as they wander aimlessly from discos, to a restaurant, to a shop, to home, and to the beach, in search of a good time.

More often than not it is trouble, instigated by the short-fused; brawl-prone Pig with Runt following his lead, that raises its ugly head. Even a trip to the store spells trouble for the duo, as Pig goes on a rampage when the owner refuses him a free bottle of beer.

In one of their intrigues, always recounted to us by the actors, Runt deliberately and seductively dances with a guy and then secretly signals to Pig, after she is kissed, to rescue her, which as their game goes leads to Pig beating the guy up as Runt cheers him on. It is at this disco where Pig realizes that he’s attracted to Runt. However, when Pig kisses her, Runt struggles and pulls away.

In another scenario, one of few quiet ones, Pig and Runt are seen lying in front of the TV watching “Baywatch.” They are simply mesmerized by the sound, sea, sand, the sex, and all of the “Caliphoney babies” of “Baywatch” as Pig notes while ogling the scantily clad Pamela Anderson. Even the sleek beauty of the Hollywood toilet catches their fancy. “Imagine having a wazz in dat bowl” Pig says. Runt’s laughingly replies, “Oh yeah pal! A pock-full a tens ta wipe da bum hole and all.”

All along, it is obvious from their behavior, and in the games that they play, that times are a changing, and both Pig and Runt want more out of their lives than what is in them. Nowhere is this more glaring than when Pig takes Runt to the seaside where, looking out to sea, they contemplate their future. Runt talks about wanting to walk out “inta the sea and neva come back. I wan ta tide to take me an give me someone differen…maybe just fur a half hour.”

Pig, unsure, and perhaps even fearful of his approaching adulthood, wants “a huge space rocket to take him up to da cosmos shiny stars all twinkle twinkle and shit in my saucer and have a good look down on da big big blue.” And then, returning to what he knows best, it is back to his “roam your room an da Palace Disco cause das all dat matters, Runt…ress is just weekday stuff.”

With a play like this which is mostly pure action delivered at lightning speed and where timing is absolutely everything, “just so perfect” production values are not only needed but absolutely required.

I am happy to say, from John Haidar’s brilliant direction, Naomi Said’s believable direction of movement, Richard Kent’s costume and set design (the latter which featured only a television), Elliot Griggs lighting and Giles Thomas’ sound, both of which recreate the play’s authentic disco moments, the audience is gifted by the very best.

Coupled with Walsh’s turbulent writing which accurately captures the adolescent feelings and emotions in Pig and Runt, the tech crew has fashioned an authentic work of art, one that tells us a lot about our own coming of age.