All Family Blood Is the Same 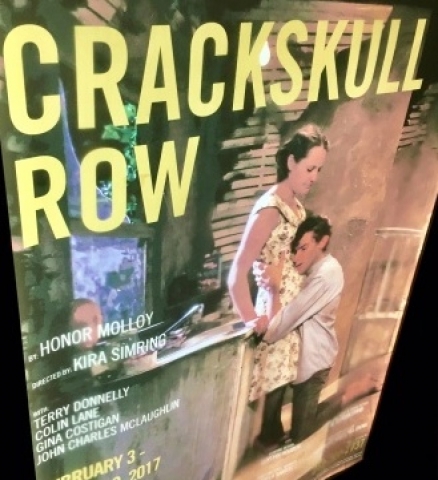 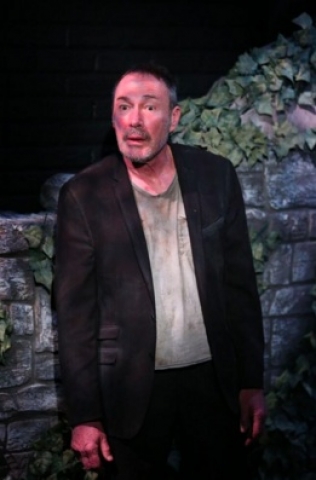 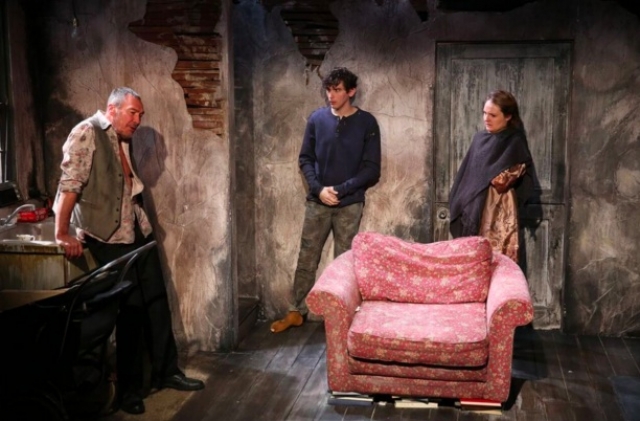 Not a good meeting around an offending chair 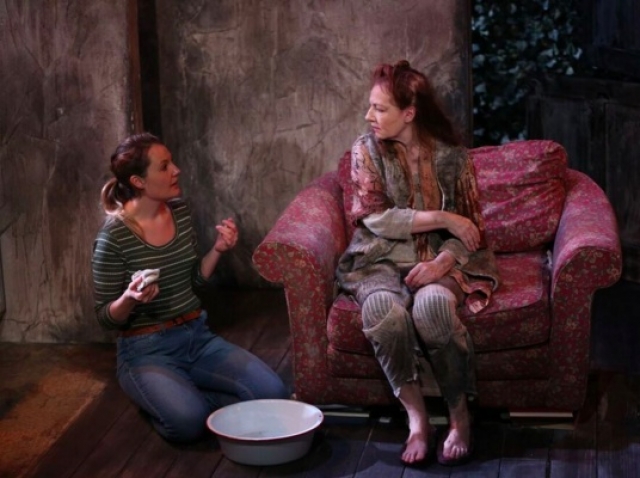 Costigan and Donnelly can't clean up the mess, but they are touching in their efforts 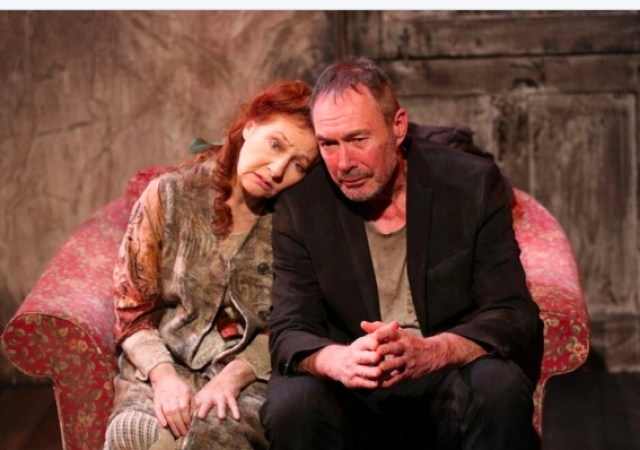 Donnelly and Lane, a desperate pair.

Crackskull Row is an eighty-minute tone poem composed in the lilting Irish language. It is a quartet, the characters: a woman, a man, their son and an angel, who is perhaps an aborted fetus of a girl who comes to life. She arrives on the tiny set, a perfect stage for this intimate yet profoundly resonating drama, by sliding down the chimney. She lands on a blood stain which had sent a son to jail for years and on the spot where a fetus was once deposited.

The play opens with a prisoner telling his tale. He is released and hovers about the home of Masher/Morrigan.  Is he the ghost of her husband or perhaps her son who she left in prison without a single visit for a biblical thirty-three years.

Kiri Simring, artistic director of The Cell, an incubator of plays created by Nancy Manocherian in Manhattan, captures every moment of pain and pleasure in the characters.

We have entered a very small world, a sink with and without running water, and an empty fireplace. Each detail of the set created by Daniel Geggatt is a perfect background for the drama. A big comfy chair in which all the sweets are molding behind a pillow turns out to attract worms as well as characters with a sweet tooth.

Time is mixed.   We are sometimes in the world of now and at others in the world of thirty-three years ago. Whether the father or the son is on stage matters little. We are caught up in a web of emotional moments created by the characters in gesture, in facial expression and particularly in the music of their voices.

Young Masher, played by Gina Costigan with a winsome sauciness, is a go-go girl.  She turns tricks to buy shoes for her son, who is in love with her and she with him.

Of course sons are in love with their mothers. It is the job of the mother to pass her son on to another.   This is a Biblical injunction. Genesis 2:24 Therefore shall a man leave his father and his mother, and shall cleave unto his wife: and they shall be one flesh.

Masher, disappointed by her husband and needing love, engages in incest with her boy, holding him ever tighter instead of helping him leave. Their union creates a child who is still-born in front of the boy’s father, Rasher. Everyone knows whose child it is.

John Charles McLaughlin plays the Oedipus role with a tender desire and makes the wish to couple with his mother touching. In the double role of an electrical inspector McLaughlin thrusts his hips forward, arching his back back, and adds an impish touch to turning on water, making tea and eating a worm.

Rasher, the father, is a musician who likes his booze and is often away for days at a time. He ends up with an empty violin case and effectively on empty with in the family. Colin Lane as both the father and older son is most often silent, moving about an ivy-covered garden outside house and watching the action inside his former home. The despair and confusion in his expression create empathy for the anguished man.

Rasher returns home with a sword he has lifted from the remains of a statue of Lord Nelson blown up by the IRA in March of 1966.  He is pushing a pram.

The sword becomes Rasher’s membrum virile and plays an important role in the play, symbolizing both life and death.

The playwright Honor Molloy has been compared to other dark contemporary writers of the Irish stage. Her subject matter is full of blood, as theirs is, but there is a warmth and vulnerability to her characters that makes them human and moving.

Bloody as Molloy’s tale is, because each character is fully fleshed and given a way of expressing his/herself which is beautiful in the darkest moments, the play stands out from others which share its violence. One feels that all families may be bloody in different ways, but that they all bleed in the same way, because family life is often difficult and disappointing.

In moving the drama from specific bloody acts to the sense that they symbolize what life is like in the bosom of any family,  this play becomes a universal song.

Seeing this drama up very close is a special treat. Because the actors are so live, we enter their one room world and feel their pain, not as cliché, but as palpable recognition of root problems in families. The hope is that Masher will move to Queens in the USA.   Whether she does or not is the conundrum that ends of the play.