Storytelling Reaches New Heights at Theatre for a New Audience 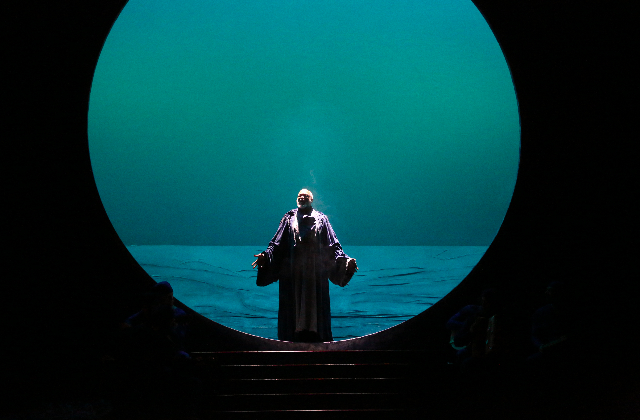 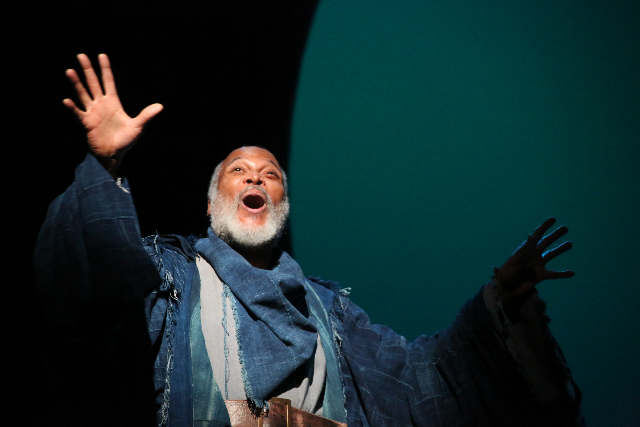 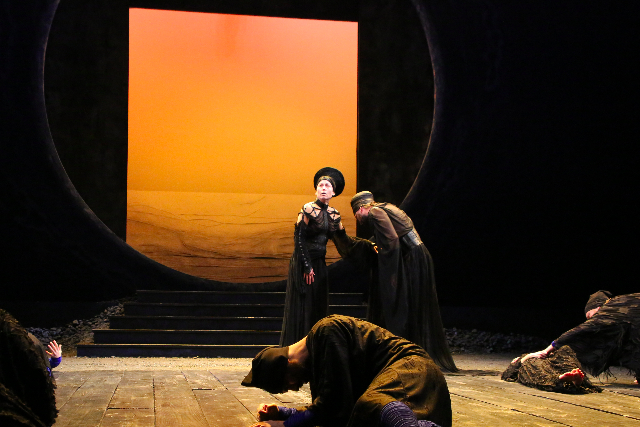 Famine strikesTarsus and there is little the Queen Dionyza can do. 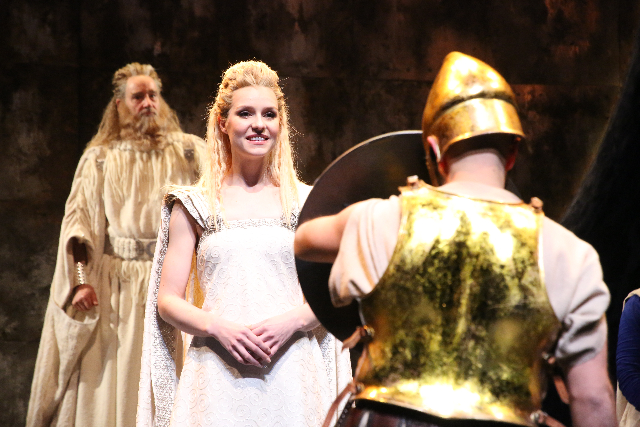 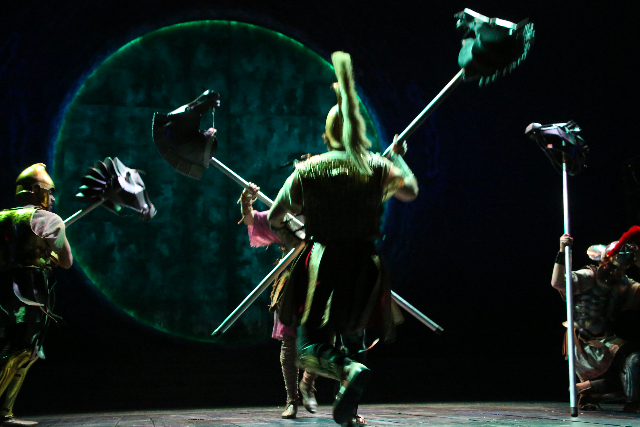 Jousting for a Queen 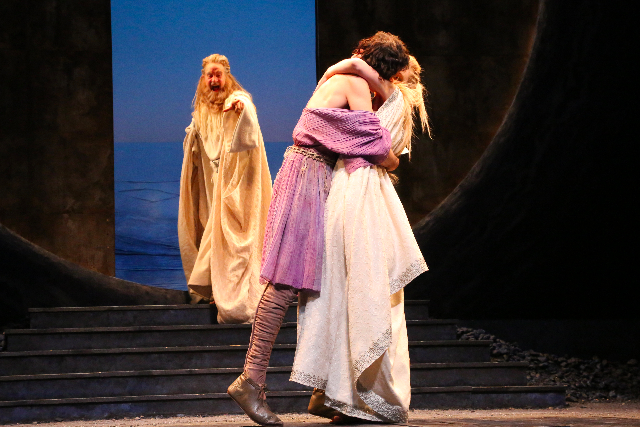 Christian Camargo wins his bride as the exuberant John Rothman looks on. 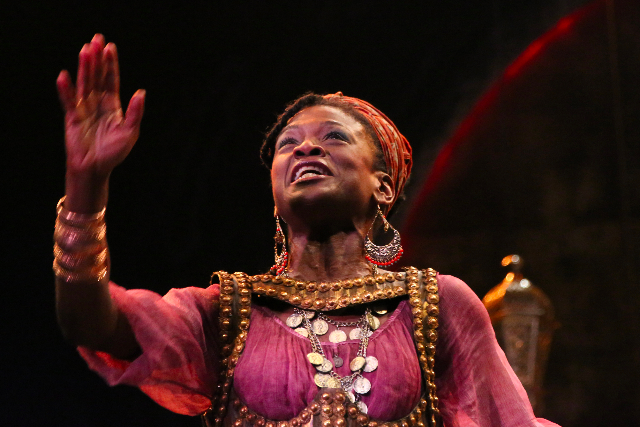 The incomparable Patrice Johnson Chevannes runs a tight ship as Madam of the brothel, but the vrginal Thaisa eludes her grasp. 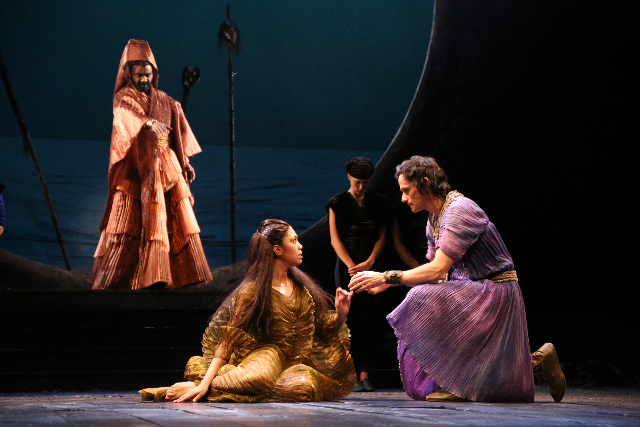 Earl Baker, Jr. is arresting as the King who seduces his daughter and then a physician who can bring the dead back to life. Here he is keeping his daughter away from the innocent but seductive Christian Camargo as Pericles. 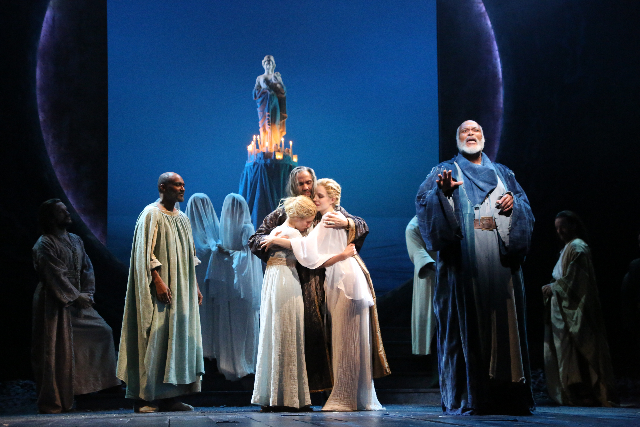 And they all lived happily ever after

Shakespeare switched gears with Pericles. Trevor Nunn's directing captures this moment of change perfectly at the Polonsky Shakespeare Center. Before the story starts to be told, The Pigpen Theater Company, a troop of musicians crowd the stage with color and the lilting music of Shaun Davey. The odyssey unfolds in their performance.

The play begins with a riddle about incest of a King and his daughter. Ben Jonson thought the play's success depended on using “scraps out of every dish.” Royal incest is followed by tempests, a jousting contest for the hand of a Princess, a lost daughter and a wife presumed dead. What else could you want?

The storyteller Gower, whose history of Pericles apparently sat at Shakespeare’s side as he wrote, is a mammoth figure in this production. He not only stands in a gargantuan orb which circles the sea during the journey of the hero, but comes stage front to urge the story on. Raphael Nash Thompson takes the world in his large embrace, which also often reaches to heaven.

Director Nunn has anchored the many strands of the play in the orb, in the storyteller and in the music. A play which is often difficult to keep together stands firm as a whole.

Robert Jones' scenic design for this production is one of the stars. Inside the orb, the Mediterranean sea on which Pericles sails, rocks to and fro. The sea spills onto the stage during torrential storms. Huge nautical ropes hang from the ceiling, and sailors ride them, buffeted by winds which waft them toward the audience. The thrust of the Scripps main stage is often a court in Antioch, Tyre or Taurus.

Battered about, Pericles seems at first an ill-fated tragic hero. Running from threats to his life; happily married, his wife is snatched away during a storm at sea. He gives up their infant daughter to the King and Queen of Tauras, who rear her beautifully. They then decide to kill her because she outshines their daughter.

Marina ends up in a bordello, but her purity and innocence enable her to maintain virgin status. The governor of Tauras is so infatuated that he cannot touch her. He makes it possible for her to overcome slavery and become a house worker in Taurus.

When Pericles finally lands in Taurus  he is a defeated man looking more like Lear than the Prince who won the heart of every woman he encountered.

A cellist hangs from the balcony where the other instrumentalists are tucked in. Balconies are used from time to time for the Prince and the storyteller. Exits and entrances are on ramps which cut through the center of the orchestra and either side of the stage. The Polonsky Center stage is a perfect thrust to engage the audience in wide-ranging proceedings.

Brothels are a cheap way to create excitement, and this is the only play in which Shakespeare descends to use one. Yet the scene is absolutely delicious, particularly in the voice and gestures of Patrice Johnson Chevannes, who is the Madam. Marina, the daughter, is the only figure who does not accede to her wishes, and drives Madam around the bend.

John Rothman’s Simonedes is particularly rich. Like all great Shakespearean actors, there is not a vowel he does not embrace. Each word is rolled around his mouth for full articulation; words are spaced for meaning and suggestion.

Lilly Englert also takes  pleasure in the Bard’s language as does the magnificent Raphael Nash Thompson.

Berkshire’s own Tina Packer insists on the primacy of language. Looks, posture, movement, and facial expressions count as well. Ultimatey it’s the words that make the play, and Nunn has drawn them out beautifully.

Trevor Nunn has created a terrific, unified production of a difficult play and offers  moving scenes along with the rollicking good humor of characters who resemble the Three Stooges.  We eagerly follow Christian Camargo as the Prince who would be good, relishing his detours on the dark side as much as his final ascent in the Temple of Diana.