Opens at MASS MoCA May 29 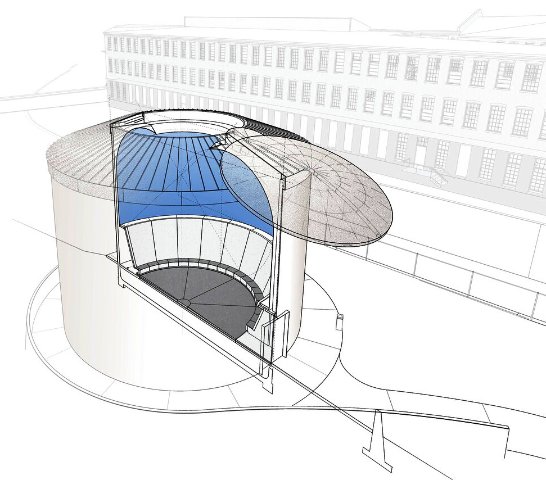 Turrell design. Images courtesy of the artist and MASS MoCA. 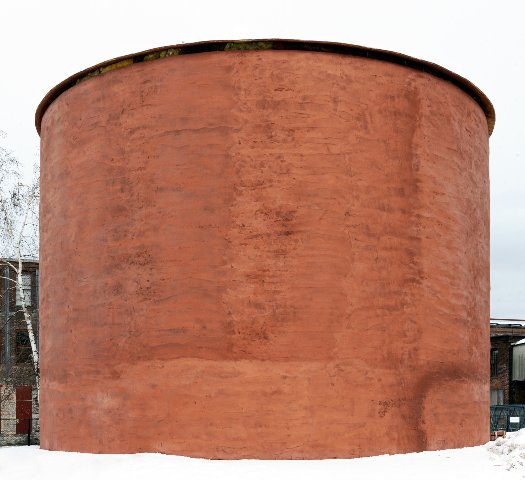 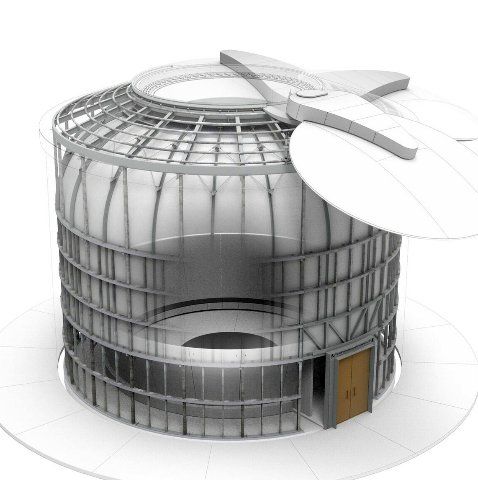 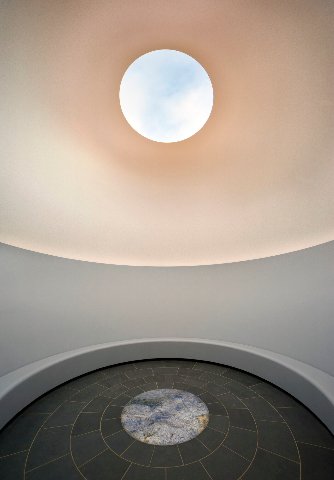 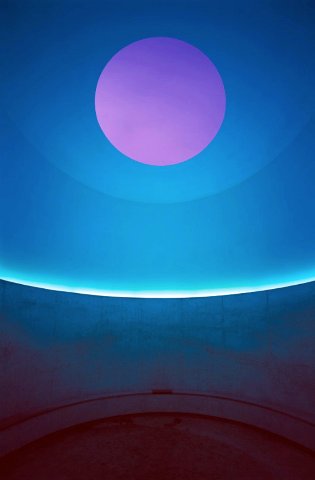 Patterns of light and color. 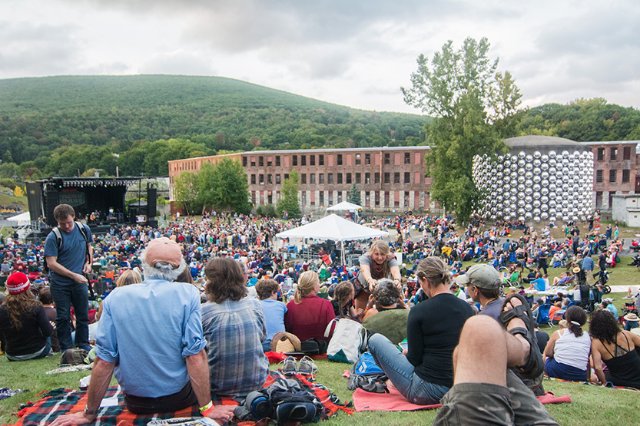 The water tower on right of Fresh Grass image of Joe Thompson field.

The Massachusetts Museum of Contemporary Art (MASS MoCA) and James Turrell have announced that a new Skyspace will open on the museum’s campus on May 29, 2021. The Skyspace will augment one of the world’s most comprehensive experiences of installations by the artist while realizing a vision the artist had when visiting the museum’s campus in 1987. The Skyspace will join a long-term exhibition of Turrell works at MASS MoCA, which includes one work from each of the six decades of the artist’s career. With the addition of the Skyspace in May 2021, the museum will now have a major example of every category of the artist’s work on display. MASS MoCA will also present a focused exhibition of Turrell’s ceramics — Lapsed Quaker Ware— from May 29, 2021 to October 30, 2022.

Turrell’s Skyspaces are apertures in the ceilings of rooms or buildings that frame the sky as a canvas with infinite depth. Seemingly bringing the sky closer to the viewer, Skyspaces function as naked-eye observatories of the sky which encourage a focused contemplation of light and space. Turrell created his first Skyspace in 1974, and today over 80 exist in public and private collections worldwide. MASS MoCA’s Skyspace will be the artist’s largest free-standing circular piece to date — 40 feet in diameter and 40 feet high — with a capacity for 50 viewers.

“This Skyspace was first conceived 33 years ago, when Turrell toured the MASS MoCA campus and identified the remains of an abandoned concrete water tank as an ideal site for the development of a Skyspace,” explained Joeseph Thompson, Founding Director of MASS MoCA. “In many ways, this story exemplifies MASS MoCA’s commitment to supporting artists and their careers over time, and to working with them to realize their dreams, no matter how big or ambitious.”

“With the completion of the Skyspace this spring, we are very proud to be the only North American institution offering a comprehensive overview of the artist’s career,” added Tracy Moore, Interim Director of MASS MoCA.

The concrete water tank that houses the Skyspace was used by the previous occupants of the MASS MoCA factory campus as a source of standby fire protection for the 16-acre, 28-building mill complex. As Turrell notes, “The work's simplicity and raw industrial materials are in keeping with my earlier works of the 1970s and '80s, which I guess is not surprising, since that's when this project was first conceived.”

Turrell’s initial idea has been amplified by the addition of contemporary state-of-the art lighting technology, precise programmable controls, and a highly sophisticated electromechanical roof dome fabricated from lightweight composite materials that provide complete light and weather sealing. During dusk and dawn, the aperture will be opened and the space will be exposed to the sky, with subtle interior lighting that complements the change in natural light during sunset and sunrise. During the day, the dome will be sealed and will be transformed into a tightly controlled multisensory environment, with light projected across the cylindrical interior walls and domed ceiling and sound altered by the contours of the architecture.

MASS MoCA’s Skyspace is being co-fabricated by the museum’s own fabrication team and the Australian-based DCG Design and Darryl Cowie, who have worked with Turrell in the past, including on the Roden Crater Project. Architectural support is being provided by Bruner/Cott, who worked on all phases of MASS MoCA’s development.  Alongside the opening of Skyspace, MASS MoCA will present a small focused show of behind-the-scenes “making of” drawings, including hand sketches, used in the development of the Skyspace. This exhibition will feature Turrell and Cowie’s drawings alongside architectural renderings from Bruner/Cott.

The Skyspace joins nine other large-scale immersive light and space installations, nine holograms, and multiple models on quasi-permanent view in MASS MoCA’s Building 6, totaling 14,000 square-feet of space devoted to Turrell’s art. Highlights of the exhibition include Afrum I (1967), one of his earliest works in which a glowing white cube seems to float in the corner of the room, generated by the bright white light of a precisely placed projector;  Perfectly Clear (1991), a Ganzfeld work in which Turrell uses light and architecture to create a loss of depth perception, using curved corners and walls in combination with colored light to confuse viewers’ understanding of spatial relationships; and Guardian (2017), in which Turrell uses light to create the illusion of a wall.

On May 29, 2021, MASS MoCA will also open an exhibition of Turrell’s Lapsed Quaker Ware, followed by an opening on May 30 of a simultaneous presentation of the ceramics collection at Hancock Shaker Village. This series of basalt tableware was designed and made in a collaboration between Turrell and Irish potter Nicholas Mosse of Kilkenny, Ireland. The pottery was inspired by the black basalt work of English potter Josiah Wedgwood in the 18th century.  Wedgwood made a decorative black basaltware for the general English market, but also created a simpler version for the Quaker market, particularly the American Quaker market.  This tradition lapsed.

At the time of their first meeting, Turrell and Mosse, two lapsed Quakers who have since returned to their Quaker roots, decided to revive the tradition.  Lapsed Quaker Ware was first shown at Ackworth Quaker School in Pontefract, West Yorkshire, England – a school for which Wedgwood made the original tableware – in an exhibition called the TransPennine Exhibition in 1996.  Lapsed Quaker Ware is used at Agua de Luz, a pyramid made by Turrell near Tixcacaltuyub, Yucatan, Mexico and will also be the tableware for Turrell's Roden Crater Project in Arizona.  MASS MoCA will present a number of table settings with large and small plates and bowls, soup bowls, beer steins, and napkin rings, as well as butter dishes, salt and pepper shakers, a serving bowl, soup tureen, an eight-piece coffee and tea service, and candlesticks. The table, sideboard, and hanging cabinets (all 2017) are designed by Turrell and built by William Burke, while the chairs are made by Thomas Moser.

For over half a century, the American artist James Turrell has worked directly with light and space to create artworks that engage viewers with the limits and wonder of human perception. Turrell, an avid pilot who has logged over twelve thousand hours flying, considers the sky as his studio, material and canvas. New Yorker critic Calvin Tompkins writes, “His work is not about light, or a record of light; it is light — the physical presence of light made manifest in sensory form.”

Informed by his training in perceptual psychology and a childhood fascination with light, Turrell began experimenting with light as a medium in southern California in the mid-1960s. The Pasadena Art Museum mounted a one-man show of his Projection Pieces, created with high-intensity projectors and precisely modified spaces, in 1967. Mendota Stoppages, a series of light works created and exhibited in his Santa Monica studio, paired Projection Pieces with structural cuts in the building, creating apertures open to the light outside. These investigations, aligning and mixing interior and exterior, formed the groundwork for the open sky spaces found in his later Skyspace, Tunnel and Crater artworks.

Turrell often cites the Parable of Plato’s Cave to introduce the notion that we are living in a reality of our own creation, subject to our human sensory limitations as well as contextual and cultural norms. This is evident in Turrell’s over eighty Skyspaces, chambers with an aperture in the ceiling open to the sky. The simple act of witnessing the sky from within a Turrell Skyspace, notably at dawn and dusk, reveals how we internally create the colors we see and thus, our perceived reality.

In 1977 Turrell began a monumental project at Roden Crater, an extinct volcano in northern Arizona. Continuing the practice begun in his Ocean Park studio, Turrell has sculpted the dimensions of the crater bowl and cut a series of chambers, tunnels and apertures within the volcano that heighten our sense of the heavens and earth. While Roden Crater is not yet open to the public, Turrell has installed works in twenty-two countries and in seventeen U.S. states that are open to the public or can be viewed by appointment. Agua de Luz, a series of Skyspaces and pools constructed within a pyramid in the Yucatán, and forthcoming projects around the world, from Ras al-Khaimah to Tasmania, integrate many of the principles and features embedded within Roden Crater.