At Conn's Playhouse on Park 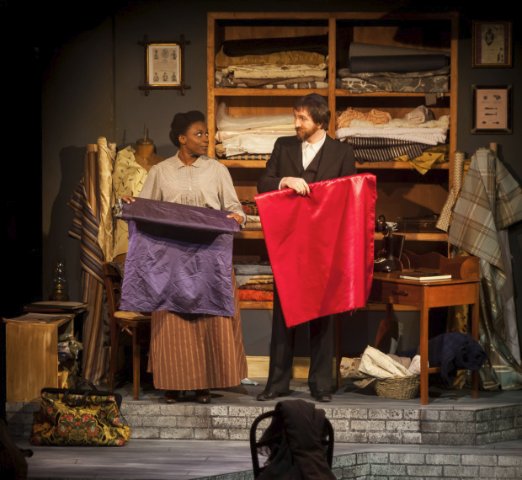 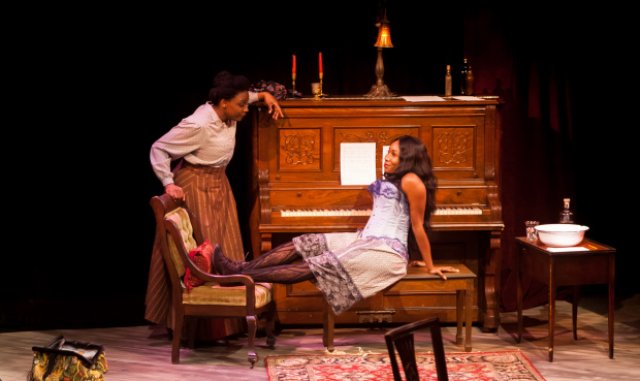 Lynn Nottage’s Intimate Apparel is making another appearance in Connecticut thanks to the lovely production at Playhouse on Park through March 4.

Nottage, whose most recent play Sweat won the Pulitzer Prize, is a keen observer of how women navigate life and the challenges they face.

In Intimate Apparel we see four women, three of whom have learned to abandon their fantasies and make choices based on the reality of the world. Each has made a “bargain” and each longs for what she has sacrificed.

The central character, Esther, touchingly played by Darlene Hope is a seamstress who has been in New York City for 17 years, having come from South Carolina. It’s 1905 and Esther, like many of the characters is an African-American. At 35 she is afraid love has passed her by, but she will not settle for practical over romantic; when her landlady in the boarding house encourages her to consider the rotund hotel bellman (at a fancy hotel), she rejects considering the idea. She wants romance.

The other three women have settled. Mrs. Dickson the landlady, had at 37 married an older man who has since died and left her the boarding house. Mayme has become a prostitute giving up dreams of playing the piano, for the money and independence her life affords her.

Even Mrs. VanBuren the white society woman for whom Esther creates lacy undergarments, has settled. She married for status and money and now, unable to bear children, watches as her husband berates her and philanders.

It looks as though Esther may get her wish of romance. In fact, there are two possibilities but one is not likely: that is Mr. Marx the orthodox Jewish man who sells her fabric. His intended whom he has never met is still in Europe; they develop feelings for each other but though both are outsiders, it cannot be.

Her second possibility arrives in a letter from the Panama Canal Zone. It’s written by George, a Barbadian working on digging the canal. A church member has suggest he write.  Esther is flustered and wonders if a “proper woman” would respond, but she does. The letters continue and grow increasingly intimate. George writes poetically and soon Esther is in love. In true Cyrano De Bergerac style, both are illiterate and their letters are written by others – in Esther case, Mayme and Mrs. Van Buren.

All this takes place in act one which ends with the wedding of Esther and George.

In act two, Esther’s dreams of a “happily ever after” life which includes using her savings to purchase a beauty salon, are not coming true. George is not the man she thought he was. Though she gives him everything he wants, he wants more and different things. He can’t or won’t find a job or accept the jobs available, instead wanting to purchase a stable with 12 horses. He wears the finest clothes, which Esther has made for him, gambles and philanders.

Esther is too proud to truly reveal what is going on to the others, but the cold reality is hitting her.

Playhouse on Park has a large stage area, surrounded by the audience on three sides; it can be difficult for a smaller play to be effective in the space. Marcus Abbott who is responsible for both the scenic and lighting design has solved the problem. He designed four distinct areas: one is Esther’s rooming house (and later her apartment), another the bedroom of Mrs. VanBuren, a third the bawdy house where Mayme works, and lastly, the tenement house where Mr. Marx sells fabric. As Esther moves between the locations, the lighting highlights the area.

Director Dawn Loveland Navarro keeps the pace of the show moving, but she can’t overcome some of its flaws: both acts are too long and repetitious. We see what is coming in each act and keep waiting and waiting for it to occur. In act one, even though I’ve seen the play before, there were at least three places where I was sure the “curtain” would go down.

Costume designer Kate Bunce does a good job with the turn of the century costumes and sound designer Joel Abbott makes effective use of ragtime.

Darlene Hope’s Esther fully realizes the determination, dreams and disillusionment of the character while also showing us her strength. It is a strong performance.

Overall the acting is very good. Ben MacLaughlin starts slowly as Mr. Marx but by the end of act one you know so much about his hopes and dreams, not through dialogue but his performance. Xenia Gray has a more one dimensional role as the landlady – the voice of practicality and reason.

Beethovan Oden has the challenging role of George; challenging because while Esther believes in him, the audience is suspicious almost from the start of the correspondence. Certainly, he is the villain in the play and he does convey a menacing nature and a calculating personality.

The other two women, Anna Laura Strider as Mrs. Van Buren and Zuri Eshun as Mayme are good as the counterpoints to Esther. With each, we do understand not only their hopes, but their compromises.

Intimate Apparel is a good, though not a great, play. You will find it engaging. For tickets, call 860-523-5900 or visit PlayouseOnPark.org.

Reposted courtesy of Two on the Aisle.