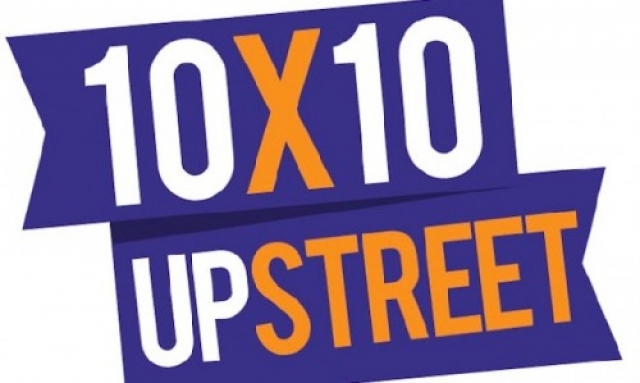 During the off season in the Berkshires for the past six years there has been the upbeat jolt of the February 10x10 Upstreet festival of the arts in Pittsfield.

For Barrington Stage that means the New Play Festival from February 16 to March 5.

In sync with the theme of  Ten the gimmick is a format of ten new plays at a swift and succinct ten minutes each.

We have barely absorbed one theatrical experience when we brace for the next.

After the first five there is a merciful break to hit the head and clear the palate.

Because of a conflict we were a week late. That proved to be a good thing as the multi purpose cast, assuming several roles in a single evening, has just nine days of rehearsal. One suspected that the extra week made a huge difference as the short plays and their roles seemed well absorbed. There were no glitches in the flawless, diverse and richly entertaining evening of theatre.

The plays were directed with skill and cohesion by Julianne Boyd and Matthew Penn.

Looking about it was good to see a sold out house on a winter evening that proved to be unseasonably balmy.

Setting the stage for the evening the plucky cast previewed the evening with a clever riff on the rap theme that opens Hamilton. They underscored ten points to consider for the performances that followed. What a blast.

The morning after the ten plays, truth be told, are a bit of a blur. With one or two non sequiturs the capsule experiences ranged from good to better and best.

To my taste the openers for both sets of five mini plays nailed it. They provided sure fire kickers and momentum setters for what was to follow.

The table setter was Sandbox by Scott Mullen with a cast of Dina Thomas, Jane Pfitsch, Mat Neely and Douglas Rees. While the playground was free to all for this unique sandbox, populated exclusively by wacky adults, there was a signup sheet for the “quiet” sandbox. It was a hoot.

Returning from the break there was the hilarious military cadence of  I Don’t Know  by James McLindon. A middle aged drill sergeant, Douglas Rees, is sounding off the traditional sexist screed for a group of recruits, Lucky Gretzinger, Dina Thomas, Jane Pfitsch, and Matt Neely. In the era of PC and the many changes in this man’s (and woman’s, gay or straight) Army the recruits with self effacement suggested changes to the traditional cadences with hilarious results.

One of the challenges and delights of the format is seeing how six actors quickly adapt to a range of roles and stylistic shifts. Most of the brief encounters entailed aspects of irony and reversal. There were punchy surprise endings.

Of the cast we were familiar with the work of Peggy Pharr Wilson a company veteran. She seemed to nail down characters that entailed elements of emotional intensity. There was a whiplash sensibility to the work of Jane Pfitsch. She morphed from sex addict chilling in the sandbox to sleek hit person or woman pilfering the coats and purses of guests at a party.

Overall, we couldn’t get enough of the spunk and comedic versatility of Dina Thomas. She had the turn on a dime chops to get just the right nuance from a daunting range of characters. It was thrilling to see her learn to toss a baseball. She also brought depth and gravitas to the most poignant and challenging cameo of the evening Raghead by Tom Coash. Her blind date falls off the rails when a average, white guy just can’t get his head straight that he is meeting what appears to be a Muslim woman in a bar. Is she or isn’t she? Thomas made us feel and respond to the ambivalence of Islamaphobia.

Our delightful evening at Barrington  Stage was the prefect cure for terminal Berkshire cabin fever.