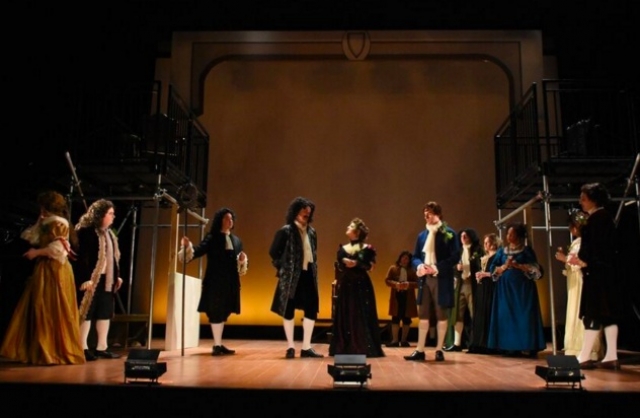 Prince of Players, a complex opera played on a simple set. 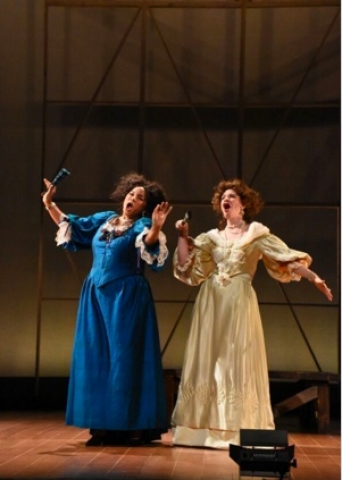 Kynaston is forced to perform in taverns after he loses his position as an actor of women's roles. The song "No Balls at All" hit the spot. 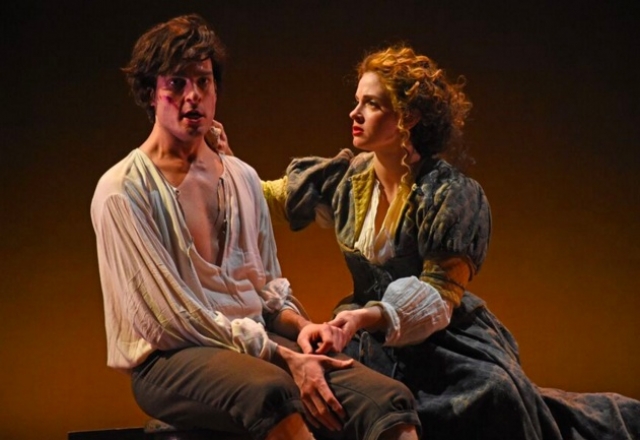 Peg saves Kynaston after he is beaten up. 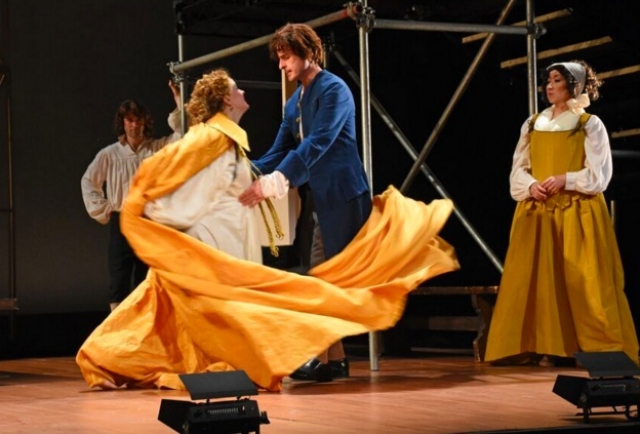 The modern, realistic version of Otello has the actors often rapped in a golden cape. Desdemonia's nurse 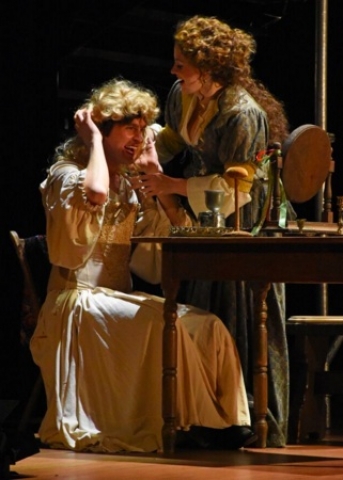 Samuel Pepys, omnipresent London diarist of the mid 17th century, wrote about performances by a “Kinaston” who turns out to be Edward Kynaston in a touching, rollicking opera by Carlisle Floyd. Originally commissioned by Houston Grand Opera and premiered in Texas last March, the Little Opera Theatre of NY staged the production this week.  Like Pepys' describes in diary entries, Kynaston on stage is the most beautiful of women and the most beautiful of men.

Staged is just the word, and so is the theatre in the company’s title. This is an opera about acting, and performances throughout shine as drama. Philip Shneidman directed for theatrical action and musicality.

Faced with the challenge of acting as subject, the composer chooses to most often offer his title character lines of music that are closest to words. Baritone Michael Kelly, playing Kynaston, is a superb actor.  Throughout he conveys the struggle of a man getting to know himself.  In the first part of the opera, when he is performing in female roles in classic fashion, his fluttering arms and often splayed hands emphasize his mood almost more than the music does.

The opera has some beautiful arias sung for instance by John Kaneklides, who is Kynaston’s paramour Villiers. It is this relationship, in which the actor is taken advantage of by the Duke, that is key to understanding the arc of the opera's story.

As a boy, Kynaston was raped and then placed on public welfare. His life has been a series of relationships in which men have abused him. Flouncing on stage as Desdemona, he gains a measure of appreciation, but his legs are cut out from under him when King Charles II’s mistress, the actress Nell Gwynn, sung by Sharin Apostolou, presses the King to issue an edict permitting women to play women’s roles in the theatre.   The Puritans had thought this kind of casting unseemly.

The simplicity of the set by Neil Patel contrasted effectively with the voluptuous period costumes, wigs and up-tipped shoes designed by Lara di Bruija.

Orchestration was a bit skimpy. Moments in which the drum and oboe underscore a brief ‘Howl” scene from King Lear are haunting and the woodwinds scampering with the backstage activity on stage are delightful. The arias which from time to time accompany deeply felt occasions are richly written.

Maeve Höglund, a soprano we don’t hear often enough, was magnificent as Peg, Kynaston’s dresser who loves him.  Her dream of becoming an actress in her own right is realized in the final scene of the opera, which is also the final scene of Otello. Stepping out from the mannered production of the Moor’s play in the first Act, we move into a new realism in acting style.  This is mirrored in Kynaston’s emergence in the male role of Otello, not his original Desdemona, and also his ascendance as a man.   Peg has put him on a pedestal, and he is finally able to put his abuse by men behind him.

Kelly and Höglund are a marvelous pair of actors and singers and bring the opera to a glorious conclusion.  The subject of gender role-playing adds a contemporary dimension to a period piece.