A Meistersinger for the Ages at Lyric Chicago 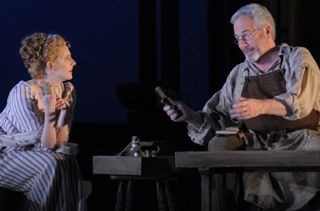 Majeski and Morris, a scene of wrenching beauty. 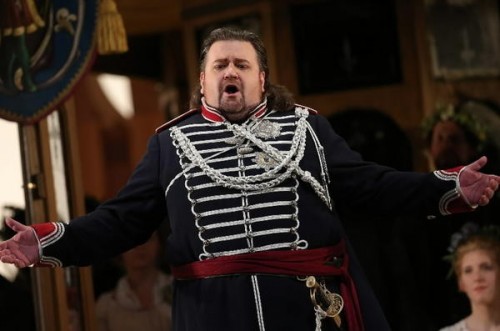 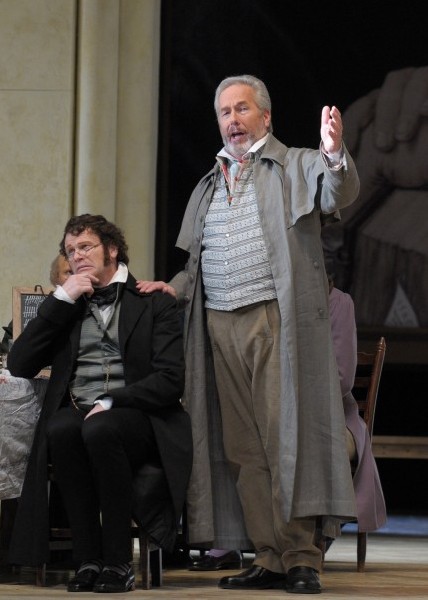 The longest day of the year in Nurnberg. 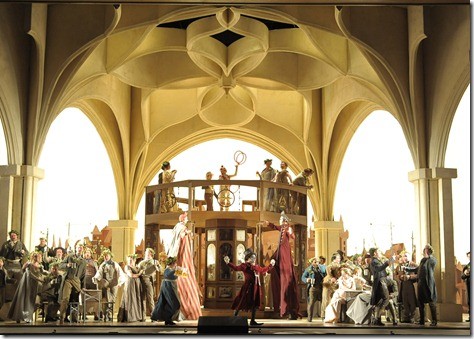 David McVicar’s Meistersinger, produced originally at Glynebourne and shared by San Francisco and the Lyric Opera of Chicago, is a smashing presentation of this Wagner opera, often cited as one of the great works of world culture, and for good reason.  In its humanity, wit, the wonderful orchestral sounds and an evocation of the longest day of the year in Nurnberg in the early 19th century, Meistersinger is glorious.

The curtain rises at St. Catherine’s church, and from the Prelude until the final notes, the chorus moves with the music; the look, feel and sound is natural and inviting.

The Meistersingers are individually characterized, comfortable with themselves and their social status.  Above all they are funny. Among the many pleasures McVicar has brought to this Meistersinger, the humor presented fills the proceedings brimful with joy.  What Wagner provided in the score is abundantly realized on stage.

At the Lyric in Chicago, the director Marie Lambert, making her American debut, freshens up the original.  In addition to keeping individual characters for all the Meistersingers, she helps James Morris as Hans Sachs realize the anguish of an older, fatherly figure relinquishing his young treasure.  In its wrenching beauty, Morris' iconic Wotan/Brunhilde scene, when the father gives up his beloved child to the ring of fire, is echoed.

McVicar/Lambert have shaped Sachs with great compassion.  When he turns Eva over to Walter, she breaks away, confused by this paternal gesture. At the opera’s end Sachs places his arm around Beckmesser, who has been ridiculed mercilessly.  They are after all, still friends and fellow meistersingers.

Johan Botha comes to life as Walter.  There is no doubt that Botha is the great heldentenor singing today.  That he is not the go-to voice for these roles at the Metropolitan Opera, it now becomes clear, is the Met’s fault.  They do not give him the support he needs to relax and act.  In Chicago Botha captures a richly nuanced Walter, who needs to win a midsummer Meistersinger competition whose rules he doesn’t have time or energy to learn.

Botha is simply splendid.  He not only sings the role beautifully, he also brings off the complicated position of an outsider wishing to win the hand of the rich, lovely, local beauty who will be this year’s prize in the Meistersinger competition.  Encouraged by Amanda Majeksi, a Ryan center alumna who is blossoming as Eva, Botha cuts a plausible romantic figure, and also a man who can take direction from Hans Sachs, and a huge talent who when treated well can live up to and exceed expectations.  The Lyric staff is clearly sensitive to the needs of singers and provides logical and useful tools to make sure they are realized on stage.

Amanda Majeski is girlish, excited and perplexed all at once.  She soars in the ecstatic melodies Wagner gave Eva.  In displaying her attraction and affection for Walter, she gives Botha a chance to show off his charms.

Bo Skovhus makes Beckmesser not unsympathetic, a high barre to surrmount.  McVicar avoids the racial stereotype in which the character is often depicted.  Yes, Beckmesser is pompous and smug, but he is also quick-witted, always listening, watching, waiting.

Jamie Barton, an important up and coming mezzo has fun with Magalena, a role she also sings beautifully.  David Portillo as her love interest and Dimitry Ivashchenko as Eva's father, are clearly rising stars.

Sir Andrew Davis conducted the rich tapestry of the orchestra score, but always kept the focus on the singers.  His is an affectionate account and the balance between pit and stage was perfect.  The strings were full-bodied, the horns and brass bold and the woodwinds delightful.

The Chicago production is a Meistersinger for the ages.  And in real time.