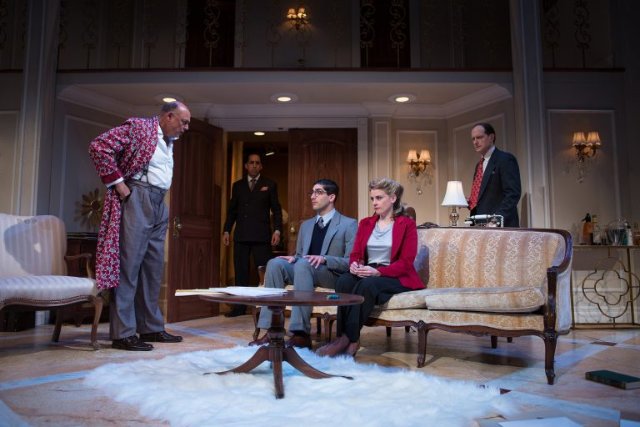 Philip Dawkins’ new play, The Burn, blends today’s online world with Arthur Miller’s The Crucible. The real life “mean girls” in The Burn are distant cousins of the young women who participate in the witchcraft scenes in the colonial-era drama.

Steppenwolf for Young Adults follows up its excellent production of The Crucible last fall with this new, eerily real drama. The combination provides back-to-back perspectives on Miller’s critique of McCarthyism and the ease of bullying and reputation attacks in today’s social media.

The Burn is a tense and smoothly choreographed play, directed by Devon de Mayo. All five characters are on stage at all times in the 90-minute production. Tara (Birgundi Baker), Shauna (Dyllan Rodrigues-Miller) and Andi (Nina Ganet) are friends (usually) who gang up on Mercedes (Phoebe González), a very religious girl. Because of her brother’s involvement in gang activity, Mercedes was home-schooled for years and only recently arrived at their school. Erik or Mr. K (Erik Hellman, who played the witchcraft scholar, Reverend Hale, in The Crucible) is the drama and English lit teacher. He’s directing the school production of The Crucible and encourages his students to audition.

The other characters all have their backstories, which come out gradually during the play. Andi is a jock and plays basketball, so she has adopted the “urban” language habits and identity of her teammates. Tara’s family has money, but she hates her stepmother. Shauna has good instincts and works hard to go to college. And Erik has battled alcoholism in the past and attends AA meetings.

Tara, Andi and Shauna constantly make fun of Mercedes, both in person and online.

Tara argues Mercedes will never see the insults they put on Facebook. She doesn’t have a computer or smartphone and does her homework in the school computer lab.

But Mercedes is a hard-core Christian and doesn’t hesitate to state her point of view. (“We don’t support Harry Potter in my house…. It’s witchcraft,” she tells her teacher.) She resists the thought of being part of the play but Mr. K succeeds in persuading her to at least audition. When she reads the script and realizes the role she would play in accusing others of witchcraft, she is fully taken with it.

Because of interest or persuasion, the four girls all audition and are cast. Scenes from Miller’s Crucible are interwoven with the girls’ chats, insults and threats. Throughout the play, the lines between online and IRL are blurred. The play ends with both physical and virtual violence, including the creation of the “burn page.”

Dawkins, a prolific Chicago playwright, has skillfully woven together Miller’s warnings from the mid-20th century with internet fears and hype today. The Burn is a remix of The Crucible, he says. Hallie Gordon, artistic director of Steppenwolf for Young Adults, asked Dawkins to write the play two years ago, based on an experience he had with a student in one of his classes.

The Burn continues at Steppenwolf Theatre, 1650 N. Halsted, through March 10. Like other SYA productions, it offers weekday performances only for school groups, and public performances Friday-Sunday. Tickets are $20 or $15 with student ID) and can be purchased online, at the box office or by phone at 312-335-1650.