Violet the Musical in San Francisco

Book and Lyrics by Brian Crawley and Music by Jeanine Tesori 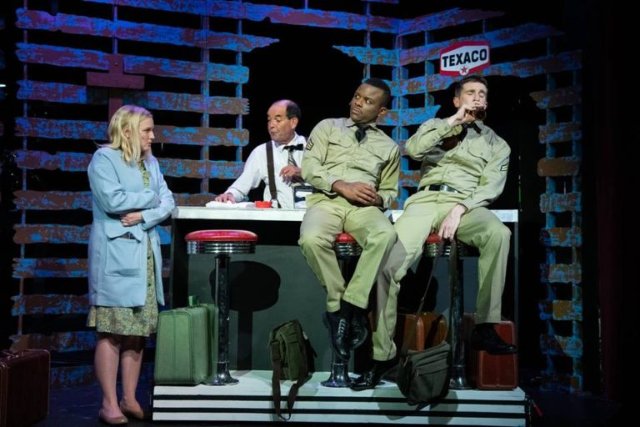 Life is not fair. Some are endowed with outsized assets from birth. Others are charged with liabilities. Perhaps more traumatized are those children and adults who suffer tragedy that changes the course of their lives unalterably. How victims adjust to the “new normal” reflects aspects of their character and determines the peace and happiness they will find going forward.

The year is 1964. Violet, a young woman with suitcase in hand, is about to board a Greyhound bus to leave her hometown of Spruce Pine, North Carolina. Her destination – Tulsa, Oklahoma. There, she hopes that a televangelist preacher will heal her face, disfigured from a hatchet accident that occurred when she was 13 years old. The musical Violet focuses on the relationships of the eponymous heroine with her father around the time of the accident and with two soldiers on the bus trip. Bay Area Musicals offers a lively and well-staged representation of a journey that changes its central figure in unexpected ways.

Although Brian Crawley’s narrative alternates freely between two eras of time, the storytelling of an optimistic but deluded quest is clear and appealing. However, motivations and characters are not well developed. Violet has been the subject of ridicule for a decade, yet in many ways, she seems confident and in control. Also, we know that the white soldier, Monty, is a skirt chaser, yet he not only wants to bed Violet, but he becomes more serious.  This, despite the fact that he repeatedly calls her ugly to her face. Further, Violet befriends and is attracted to the black soldier, Flick, but their draw to one another is not evident. We can, however, infer that they have mutual empathy because each is judged by the skin, not what is within.

Jeanine Tesori’s delightful score adds both lively and touching aspects to the drama. Although very much in the style of a Broadway musical, it embraces many idioms of the time and place from the folk inspired “Water in the Well” to the gospel “Raise Me Up.”

The procession of scenes entertains throughout. But ultimately, the viewers’ satisfaction with the whole may depend on their feeling about the main character. Failure to sympathize with the plight of Violet’s damaged body and spirit is unthinkable. But what of her quixotic obsession with faith healing?

In an effective casting, the talented Juliana Lustenader plays the young adult Violet, while Miranda Long, looking like a younger version of Lustenader, plays Violet as a young teen. Among the many supporting characters, Clay David stands out in this role as the preacher, exhibiting his flamboyant characteristics and revealing his dark side as well.

Perhaps the dominant discussion point among attendees after the performance concerned the absence of scars on the face of either Violet. This makeup decision is not without precedent or without reasonable explanation. Perhaps the audience would be put off by seeing both of these young females portrayed with physical deformities. But also, the absence of the scars allows viewers to use their own imagination to visualize the mutilation. And even more significantly, the invisibility of the scars may reflect the notion that we all bear scars, but that most of them are not seen.

Violet with book and lyrics by Brian Crawley and music by Jeanine Tesori is produced by Bay Area Musicals and plays at the Alcazar Theatre, 650 Geary Street, San Francisco, CA through March 17, 2019.