The Gift at LA's Geffen Playhouse 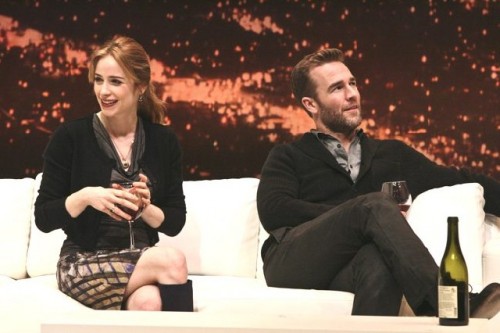 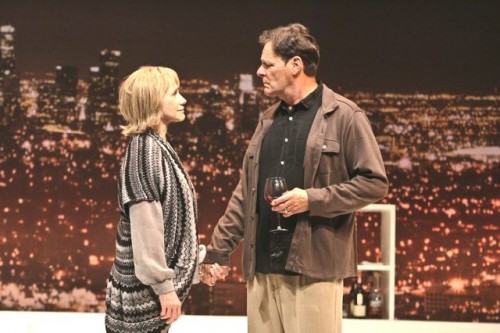 Kathy Baker and Chris Mulkey in the American premiere production of The Gift by Joanna Murray-Smith, directed by Maria Aitken Michael Lamont

The Geffen Playhouse of Los Angeles is a first-tier Regional theatre with a distinguished track record of delivering quality theatre and entertainment.  Unfortunately, however, one doesn’t hit a Home Run every time up at bat, and that certainly is the case with the premise-challenged “The Gift”, written by Australian playwright Joanna Murray-Smith.  Despite its valiant and talented cast, this 90 minute, four-hander, could have accomplished all it had to say in twenty minutes.

One of the problems with the piece, at least for me, is that Murray-Smith, and possibly director Maria Aitken, are not sure what kind of story “The Gift” is supposed to be and what the play is trying to convey.  At first the audience is lulled into a George and Martha, Honey and Nick” square-off a la Edward Albee’s master work “Who’s Afraid of Virginia Woolf”.  Just when we figure where we’re going Murray-Smith veers off in another direction.  Now we’re being treated to a cautionary tale of a generational divide in mores and culture

The story revolves around two couples that meet at a tropical vacation resort.  The older couple, from California, is played by the consummate performers Cathy Baker as Sadie, and Chris Mulkey as Ed (as a plot point: Ed can’t swim).   Sadie and Ed have decided to give their troubled marriage a shot in the tropics as a way of re-charging their fading passion for one another.  The attractive younger couple played by Jaime Ray Newman as Chloe, and James Van Der Beek as Martin, are both creative, self-absorbed types from New York.   She is a writer and he is a conceptual design artist.  They find themselves at the resort as a result of having won a raffle.

Alcohol-fueled conversations that go on for what seems like hours send the story in one direction and then into another.  There’s a heck of a lot of talking going on, but very little new ground is being broken.  It appears we’re going to be witnesses to an East Coast vs. the “Left Coast” values contest.  But, there is always the unexpected in life, and even in the theatre, with which to contend.  The ambiguous title of the play offers a ray of hope that later on the audience might be in for something new or challenging.  Instead, the playwright delivers a predictable “the mixture as before” prescription and the opportunity for a credible plot, believable characters, and plausible dialogue comes too late in these dreary proceedings despite an onstage hurricane effect.  The air came out of the balloon early on with no way to re-inflate it.

It’s a shame to waste the talent and effort of four first-rate performers, all of whom have solid credits in stage, screen, and TV.  They’re working hard up there on the stage, but to no avail.  The audience has been checking their watches for some time.

The technical credits for the production are a different matter.  The scenic design by Derek McLane, is spare, but appealing in its California look and feel. The lighting design by Peter Kaczorowski compliments the efforts of media designer Howard Werner who creates a veritable on-stage hurricane with projection overlays and lighting support.

“The Gift” runs through March 10th.  For tickets and reservations call the Geffen box office at 310-208-5454 or go online at www.geffenplayhouse.com.