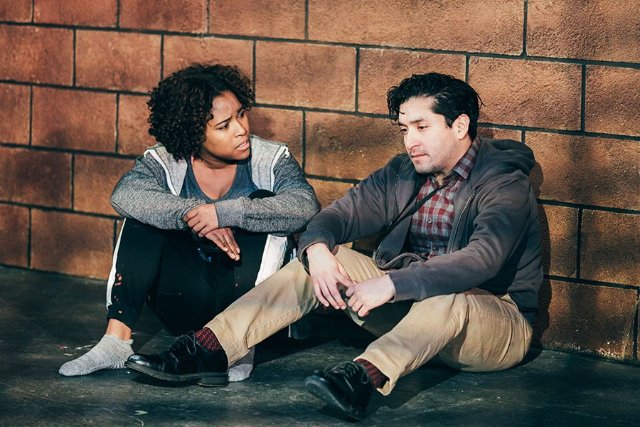 What does fulfillment mean? The playbill for A Red Orchid Theatre’s Fulfillment Center gives us more than a clue. Artistic director Kirsten Fitzgerald’s note lists definitions and describes what fulfillment means to her. Without exception, she says, “this feeling involves some sort of connection with other humans.”

And that indeed is what Fulfillment Center is about. Humans reaching out to other humans in an effort to connect. And also the process of handling customer orders such as packing and shipping. Abe Koogler’s play is the story of four working people (two of them educated ex-New Yorkers) trying to get by in a mid-size New Mexico city. Jess McLeod smoothly directs an excellent cast of four.

Suzan (Natalie West) is an aging former folk singer, desperate for a job so she can get her car fixed and drive home to Maine. She’s applied to work during the holiday season at the fulfillment center for a big online retailer, where Alex (Jose Nateras) is the manager. As the play opens, he’s timing her as she carries boxes from place to place around an obstacle course, “without running.” Suzan, with knee and back problems, barely passes but Alex hires her and they begin a fraught but semi-friendly relationship. Alex orients her to her new job (nine hours plus an hour break) and the productivity of the team: Moving 40,000 packages a day on average and double or triple that during the holidays. He concludes with the company line, delivered like a robot, “New Mexicans depend on us to make their holiday dreams come true.”

Natalie is living in a tent in a campground, where she meets John (Steve Schine), a carpenter who lives in his car. John clearly has some iffy events in his past, mostly involving women, and he resists her chattiness.

At Alex’s apartment, his girlfriend Madeleine (Toya Turner) has just arrived from New York. (Her job allows her to work from home.) Madeleine’s first reactions to New Mexico reminded me of my own, when my then-husband and I drove across US 40 to Gallup and then north on US 666 into Colorado. It was my first trip west. It’s so quiet, Madeleine says. Adobe houses in the distance. Few cars on the highway. Where are the people?

Madeleine never learns to like New Mexico. “I came here to this nightmare shithole desert town” for you, she complains to Alex. And Alex doesn’t seem so sure that his job assignment will be only six months. He’s afraid he’s not performing well as a manager (poor metrics) and won’t get the promotion to work in Seattle. When Alex surprises her with a marriage proposal, Madeleine doesn’t receive it happily; in fact, she screams at the thought.

Madeleine is so discontented that she looks for companionship online. She and John meet for an awkward first date, which mainly involves consuming a bottle of tequila. The date doesn’t end well, however, for either of them.

The relationship between John and Suzan is awkward too. She makes tentative advances to him, eventually getting him to talk a little. He invites her to sit in his warm car and later agrees to drive his car across country for her.

The conversations by the various pairs—Suzan and Alex, Suzan and John, Alex and Madeleine, Madeleine and John—are elliptical, uncomfortable, and framed by just-missed connections. The one hopeful moment is when Madeleine tells Alex that she hates New Mexico but she’s glad she came.

Throughout the 90-minute play, we track the troubled lives of these four souls. We know a sliver of their back stories, but they really aren’t fully fleshed-out characters. We know the most about Suzan, the most voluble in talking about her past as a singer and her family experiences. West’s characterization is beautifully realized.

Koogler’s script and McLeod’s direction benefit by Sarah JHP Watkins’ stripped-down set. The design, or lack thereof, demonstrates the importance of strong acting and direction. With a blank adobe-toned stone wall as backdrop, furnishings are just a bench and an assortment of corrugated boxes that serve as tables and desks. Mike Durst’s lighting creates moods for daytime and campground evening settings. Brando Triantafillou’s sound design and original music bring in touches of music from Suzan’s past and John’s car radio.