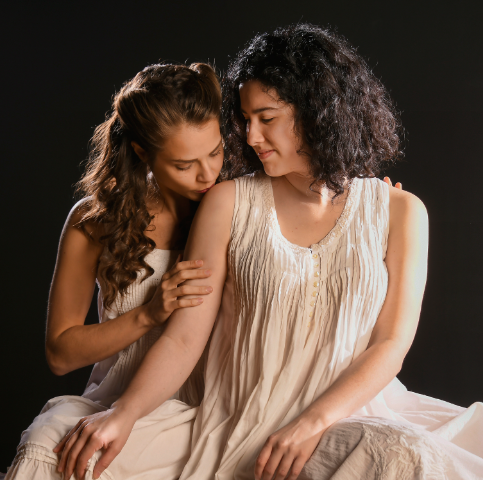 (Photo by George Schiavone) (From left) Kelly Pekar as Manke and Hannah Benitez as Rifkele. 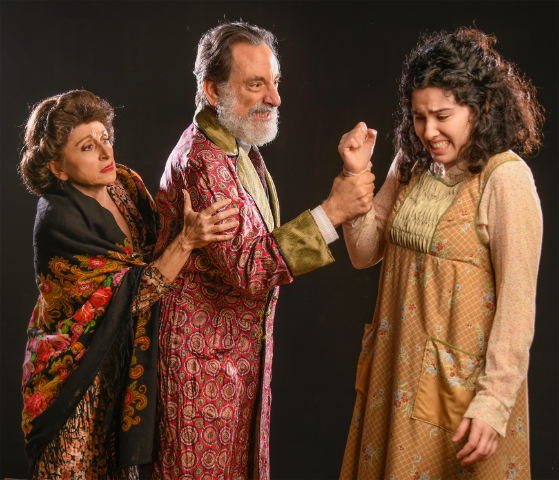 “They say America is free? What do you know here is free?”

The above line is from Paula Vogel’s popular biography play with music, Indecent, now running in a mostly strong, creative production at GableStage on the grounds of the Biltmore Hotel in Coral Gables.

The work is about a real-life controversial Yiddish play, The God of Vengeance, with which many might not be familiar. It concerns an Orthodox Jewish man's conflict between his less-than-respectable profession and his desire to be pious, or at least moral and a good father.

But even if audiences think they need to dig deep to uncover modern-day relevance in such a work, there is plenty that is timely and timeless in Indecent.

For example, consider that the speaker of the aforementioned line is an immigrant named Lemml.

While his opinion might sound overstated, it probably resounds these days with a pang of truth to many. Today, there are people in the U.S. who may seem less than hospitable to immigrants, Jewish people, freedom of expression, gay rights and the arts in general.

These are some issues and topics that Vogel sympathetically, sincerely, unflinchingly and without sentimentality, deals with in her melodramatic, engaging and riveting play.

Layers of themes and questions to consider are stacked high. You may end up dizzy with things to ponder. This is true, despite the play’s 95 minutes or so.

Certainly, Indecent encompasses an epic sweep of time (1906 to the 1950s) while containing an aura of intimacy and tenderness. But while the brand of closeness depicted in the play might be gaining in acceptance, it was shocking – and indecent – to many back in the early 1920’s.

As a matter of fact, the divisive play by then renowned Yiddish author Sholem Asch disturbed some to such an extent, the unthinkable occurred. Namely, authorities arrested the entire cast and crew on charges of indecency when the play premiered on Broadway in 1923. An obscenity trial followed and the creatives were convicted. Further, authorities shut down the play after one performance.

However, the forward-thinking The God of Vengeance hardly experienced obstacles in the many countries in which it played. Quite the contrary, it experienced widespread success. Asch’s play, originally written in Yiddish, received translations into many other languages.

But The God of Vengeance, which featured the first lesbian kiss on an American stage, was too much to handle for some U.S. audience members. For instance, a rabbi at a prominent and historic New York City synagogue spoke out in opposition to Asch’s play. His words may have influenced the work’s fate.

Vengeance includes plenty of risqué material. One of its settings is a brothel, operated by an Orthodox Jew of questionable character. He, among other actions, throws a Torah scroll during the play. The Christian equivalent would be, for instance, desecrating a cross bearing the crucified figure of Jesus or deliberately spilling holy water.

So, is The God of Vengeance a poetic, seminal work of Yiddish literature, as some believed? Or, is it a filthy, indecent, abominable piece of writing? In fact, one person famously urged Asch to burn his play.

Vogel presents no easy answers to these and other questions: What is art and who decides whether something deserves that title? At what point does someone’s creation become so offensive that it warrants censorship? Is there even a place for censorship in a free society, regardless of the work in question’s offending nature?

Again, Vogel wisely leaves it to audiences to consider such questions.

One of Indecent’s weaknesses is that it offers hardly any insight into The God of Vengeance. For instance, at one point, Lemml proclaims, “Mr. Asch! Your play it changed my life.”

But why did this play have such a profound affect upon him and others? You won’t find such answers in Indecent.

What you will find, among other things, are short, pity scenes. They reinforce the sense that The God of  Vengeance quickly gained popularity during its tour of Europe before its ill-fated, one-performance Broadway run.

Under the astute direction of GableStage’s producing artistic director, Joseph Adler, there’s a cinematic- like quality to scene transitions. This helps create a fluid production, and one that enhances the sense of momentum fueling Asch’s play as it tours Europe. Helpful projections include subtitles translating Yiddish dialogue and song, which this cast nails. In addition, the cast shines in speaking in dialects.

This production begins with the rumble of a train. The setting is obviously World War II and the Nazis are transporting Jews, including this Jewish troupe of performers. We see upturned chairs and other objects, suggesting a state of ruin – and death. Indeed, shortly after the play begins, the troupe is dead. But slowly, they return to life and shake off their dust.  This can serve as a metaphor for the Yiddish language and the Yiddish Theater coming back to life.

Even today,  a Yiddish version of Fiddler on the Roof recently experienced a sold-out run downtown at the Museum of Jewish Heritage in New York City. It has moved uptown, to 42nd Street.

Meanwhile, GableStage has added performances to meet demand for tickets for its evocative production of Indecent.

Even though the show is not a musical in the traditional sense, its music  animates the production and adds immeasurably to the mood of scenes. Credit Lisa Gutkin (violin), Nancy Hoffman (accordian) and Glen Rovinelli (clarinet) for enhancing scenes with Klezmer and other types of music. By the way, Gutkin, the co-composer and music director, played in the original Tony-winning Broadway production.

The tunes range from seductive to joyful to mournful and haunting. We can keenly sense the latter quality in “Wiegalla.” It’s a tender lullaby written by a nurse at the Children’s Hospital at Theresienstadt. The tune, which comes toward the play’s end, foreshadows the sad real ending. It’s not to be confused with the happy ending imagined by one of the characters.

Speaking of the people populating the real-life world of Indecent, each of the seven cast members portrays multiple roles.

While the actors overplay some moments, they mostly succeed in creating believable, robust characters.

Kudos go out to, among others, Avi Hoffman. He imbues tailor turned stage manager Lemml with a sincere emotional quality that makes us believe that this man pours his heart and soul into everything he does.

In addition, Alex Alvarez’s telling facial expressions and intensity lend Asch a sense of urgency and a dreamy, unorthodox quality. It’s hard not to see, or at least picture, a cross between Fiddler on the  Roof’s revolutionary Perchick and the modest, but sometimes ardent tailor, Motel, in Alvarez’ Asch.

Hannah Benitez lends Yekel’s daughter, Rifkele, an aura of optimism and innocence. By contrast, Kelly Pekar’s wide, daring eyes instill prostitute Manke with a sense of primitive seduction. Together, the pair, the lesbian lovers of The God of Vengeance, share an alluring chemistry.

While cast members offer, for the most part, strong performances, they could better differentiate one of their characters from another. Also, sometimes the actors start singing or talking before the lights come up.

Regarding the lighting, Jeff Quinn softly illuminates the stage during intimate scenes but uses more intensity for upbeat scenes. However, Quinn could use color more to enhance mood.

Despite the directors’ deft pacing, audience members must pay close attention during the action. The chronology can be confusing and the playwright condenses long amounts of time into short scenes.

Asch’s play can confound. It might help if a theater company produced both plays in repertory, with Vengeance followed by Indecent.

Undoubtedly, Vogel’s play offers no escapist, lighthearted night at the theater. And while one can view Indecent from a variety of angles, this is a cautionary play on many levels. Productions are especially needed during these times of extremism, darkness and divisiveness.

Indecent runs through Feb. 24 at GableStage, 1200 Anastasia Ave., on the grounds of the Biltmore Hotel in Coral Gables. Performance times are 8 p.m. Thursday, Friday and Saturday, as well as 2 p.m. Saturday and 2 p.m. and 7 p.m. Sunday. For tickets and more information, visit www.gablestage.org or call (305) 445-1119.