The Metromaniacs at The Old Globe 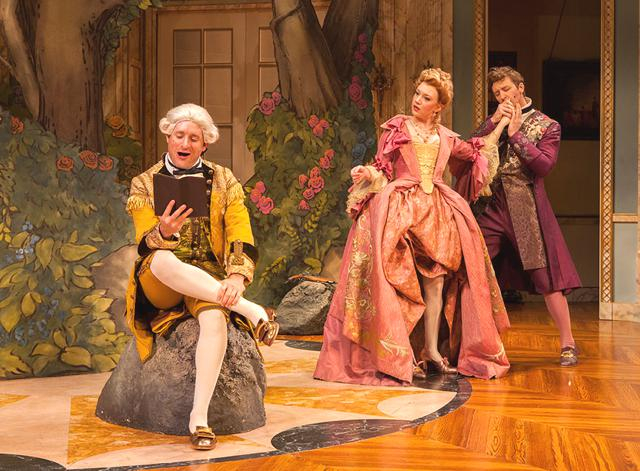 (from left) Michael Goldstrom as Mondor, Amelia Pedlow as Lucille, and Cary Donaldson as Dorante. Photos by Jim Cox. 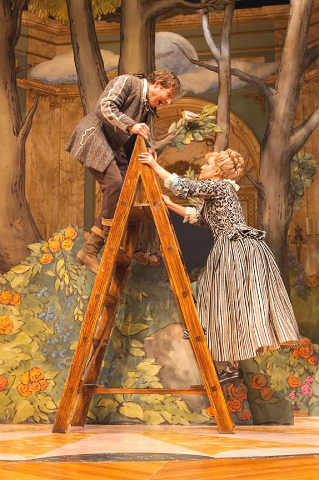 Michael Goldstrom as Mondor and Dina Thomas as Lisette. 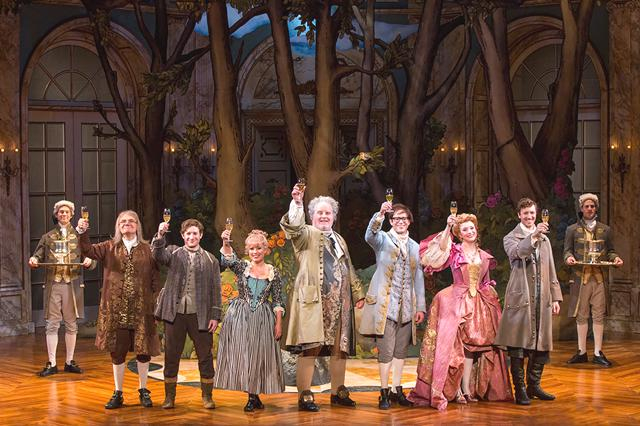 The cast of the West Coast premiere of David Ives’s The Metromaniacs.

Chicago-born playwright David Ives has been called ‘the master of the short-form’ when it comes to playwrights.  With a trunk-full of short plays, essays, and various forms of literature squirreled away someplace, it was only a matter of time before he moved on to writing full length plays.

He is also a master at translation from French into English and then adapting the source material into a fresh play or a movie script. He likes to call the process: “translaptations”.  Two of his “translaptations”; are two of my favorite Ives’ plays: “Venus in Fur” and “All in the Timing”.

I have long harbored a theory as to why French classic comedies and farces have never been that popular with American audiences.  We Yanks can’t quite grasp or understand the ‘Master-Servant relationship’ in all of its idiosyncratic iterations.  It’s an alien relationship form to us.  This may be why we see so little of Moliere,  Corneille, Piron or Feydeau being produced in American regional theatres yet we embrace the form in the plays of our cousins, the English.  It must be a case of ‘it’s the audiences stupid’. But, I digress.

Playwright Ives serves up a tasty French pastry of fluff, silliness, and poetry of the absurd, in his hilarious adaptation “The Metromaniacs” now on stage at The Old Globe, masterly staged by award-winning director Michael Kahn.

Under Kahn’s intelligent, stylish, and creative vision this gifted ensemble of farceurs knows what to do when they find themselves in one.  Metaphors abound in French farce.  The characters and plot situations performed were crafted in such a way that the playwrights and actors during the 17th and 18th centuries got to poke fun at both the Monarchy and the Church, while having their heads remain upon their shoulders; to perform again.  Americans have very little appetite for political or religious satire, no matter who writes and performs it.  The French and the British are not so skittish.

The play doesn’t revolve around any particular character, but more around a subject.  The subject being poetry and those who write it, read it, enjoy it, and are intoxicated by just the thought of it. Some of the play’s character poet practitioners, however, are not as gifted as they think they are.

Remember, the story such as it is, is a farce where anything goes is not only hilarious, it’s also chock full of madcap onstage antics that are worthy of a Marx Brothers storyline – but no slamming doors –  just PLENTY of mistaken identities, scheming servants and disguises to the delight of the audience.

The play opens in the home of the wealthy Mr. Francalou (Adam LeFevre) where young poet Damis (Christian Conn) who is totally obsessed with poetry, has become bewitched by the verses of a mysterious poetess, not knowing” she” is really his host and the father of Lucille (Amelia Pedlow). Lucille likes Mr. Dorante (Cary Donaldson), the son of his sworn enemy, so Francalou allows Damis to believe his daughter is the poetess. And then the romantic chase scenes begin.

I know, it all sounds confusing, but as the great Sherlock Holmes always says: “Patience Watson, all will be revealed.”  It may be a French playwright that started it all, but the translaptation by American Ives, leaves the audience thinking about an English playwright who sort of has the last thought so to speak: “All’s Well that Ends Well” by the incomparable Bard of Avon.

The first-rate ensemble cast is blessed with actors who display impeccable farce timing and skill.  They are: Michael Goldstrom as Mondor Damis’ valet; Dina Thomas as Lisette, Lucille’s maid; Peter Kybart as Baliveau, Damis’ Uncle, and Benjamin Cole, and Conner Sullivan as servants, along with the above mentioned Christian Conn, Cary Donaldson, Amelia Pedlow, and Adam LeFevre. “The Metromaniacs”, definitely appeals to sophisticated and savvy theatre devotees who are willing to enjoy without questioning; just letting the onstage antics wash right over them.

The Old Globe has few equals when it comes to technical credits and this production is no exception.  The creative and visually stunning Scenic Design by James Noone, with gorgeous costumes designed by Murell Horton; a lighting design by Mark McCullough and a Sound Design by Mark Tierney ensure that everyone has a fun evening at the theatre.

“The Metromaniacs” performs at The Old Globe Theatre on the Donald and Darlene Shiley Stage, through March 6, 2016.