A Great Parsifal at the Metropolitan Opera 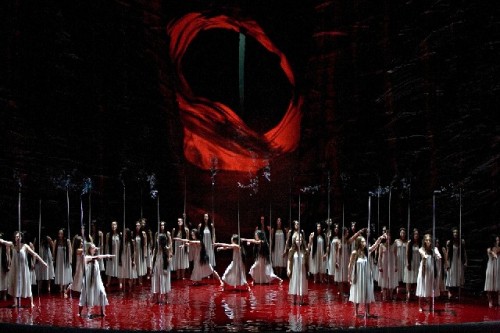 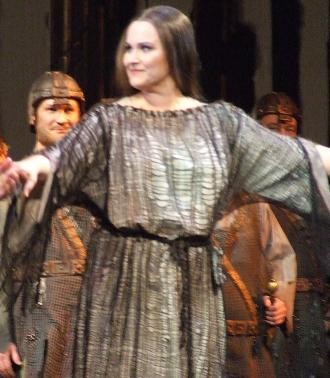 Wagner called his last opera Parsifal a stage consecrating festival play, not an opera at all.  In this brilliant staging at the Metropolitan Opera, a joint effort with the Opera National de Lyon and Canadian Opera Company, just the right tone is struck for Parsifal’s quest.  Francois Giraud clearly understands opera, the mission of a designer to put the music front and forward.  Like Willy Decker and David McVicar, there is a quiet offering on stage.  Singers stand out and the focus is on the musical story’s progress.  Daniele Gatti, who conducted a lyrical take on the score, brought the sung musical lines forward.

Visually, the staging is perfect.  Black and white with the sacramental red of the blood, gushing from Amfortas in the first act as it runs in a gully through a quarter of the slightly raked stage floor.  In the second act, it covers the stage and comes to drip all over the white costumes of the vestal virgins and Kundry transformed into a seductive young woman.

Rene Pape sings the role of a lifetime as Gurnemanz.  In absolute control, but with soaring beauty and feeling, you can take neither your ears nor your eyes off him.  A commanding performance not susceptible to description.  Katarina Dalayman too sings with great beauty and passion.  Peter Mattei as Amfortas and Evgeny Nikitin as Klingsor round out the deservedly star filled cast.

It is not hard to see why Jonas Kaufmann is cast as Parsifal.  He cuts a handsome figure on stage.  He is however the only misstep in this production.  His voice simply does not ring.  Also, the Met’s touch in this co-production is a heavy-handed exposure of Kaufmann’s six-pack in the second act.  The six-pack does not exist.

Heriatic gestures are popular in modern theater.  They are described as the fundamental vocabulary of body knowing, the body’s primary agent in making meaning out of experience.  They are universal and refer both to ‘the whole’ and the ‘holy.’

These gestures are used to almost perfect effect in Francois Girard’s staging.  The men in the inner sanctum of the Grail, and the flower maidens in Klingsor’s garden use them to dramatic ends. One posture looked like my position as a center on the family football field, but others looked more like my cousin, Canon Bishop of the Episcopal Church, performing communion.  This surely is the director’s intention, because the opera is a consecration.  You don’t miss the classic spear flown on invisible wires and stopped by Parsifal.

A circle at the center of the sanctuary of the Holy Grail in the first act formed both a flower blossoming and a protective exclusion.  While Pape moved comfortably on his turf, and Mattei was highly dramatic as he struggled to stop his blood flow, Kaufmann from the start was awkward.  He suggests a dramatic line as he sings but by the use of dynamics, not feelings.  Surely his pianissimos are a thing of beauty, but they mask a coldness.  He is temporarily filling a gap in the Wagnerian tenor category.

The HD of this production is on March 2nd and based on the magnificent take in the house should be well worth 6 hours of your time.  Wherever the human image is portrayed, the hieratic gestures are to be found.  Without them, one cannot create meaning out of one’s experience.  With them, you get a production like Parsifal.