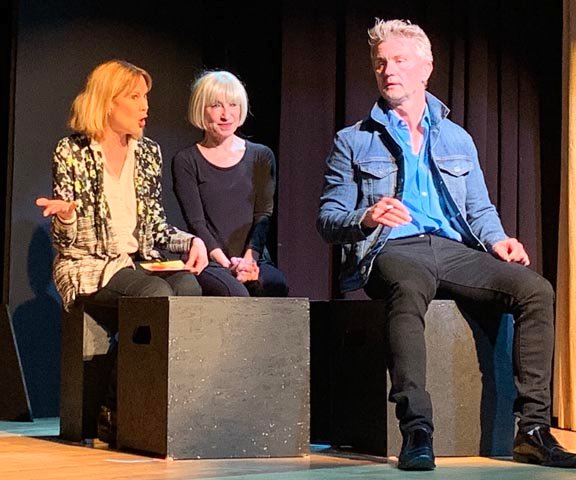 Motherhood is a powerful motivator that drives the need for mankind to fulfill its destiny – the propagation of our species.  But the rub of the matter is that some women are barren, unable to have children.  Their only recourse, in many cases, is either to have an in vitro fertilization procedure or adoption.  Unfortunately, the latter option opens the door for “the charlatans” of the world to take advantage of vulnerable and anxious, naïve young couples wanting to become parents.

The powerful drama about foreign adaptions is a true story based on an actual event that takes place in the Winter of 2004, in Weston, Connecticut, Moscow, Russia, and at Vovoysa, an orphanage near the Siberian border.

“Adoption Roulette” is an Actors play. The action takes place on a bare-bones stage with no props or set furniture.  The physical movements in the play are mimed, and the actors play multiple roles.

Yo Younger stars as Elizabeth Fuller, delivering an astonishing portrayal of a woman slowly melting down under the pressure of the fraught situation she finds herself in.  Liz is caught up amid the red tape of a foreign adoption in Russia, without speaking the language.   Remember, in 2004, America is immersed in the Iraq War.  Strained diplomatic relations between Russia and America also doesn’t help Liz without her husband Reuel Fuller, being by her side for support.

Fergus Loughane plays Reuel, Liz’s loving husband, as well as a Delta Airlines pilot, Igor, a Moscow taxi driver, a Flight Attendant, and a Russian Agency Official. Reuel is frustrated and suspicious with the way the adoption process is going and wants Liz to rethink the adoption with another agency, perhaps at home in the states.  His Russian character accents are spot-on.

Adina Lawson plays Olenka, the sly in-country guide and translator for the Fuller’s while in Russia. She is also Marion, the Fuller’s friend, and family lawyer, Lois and Dianne, family friends, Orphanage Nurse Blatovsky, and a stern and unhelpful Russian Judge.  Ms. Lawson’s Russian accents are also especially convincing lending authenticity to her Russian characters.

The beauty of this production lies in the strong performances of the actors who play multiple roles.   One can only imagine the mayhem taking place back-stage as they jump from character to character, each requiring different costumes and each looking cool, calm, and unflappable when they do reappear in their scenes.   Kudos to the back-stage dressers that make it all happen.  Bless them all.  These are the magical moments that actors live for.

As the play unfolds, it becomes a bit difficult to accept the incidents being presented on-stage as believable.  The roadblocks erected by non-government private Russian adoption agencies for Americans seeking to adopt Russian children is filled with bureaucratic red tape, frustration, and disappointments, along with deceptive policies that  Liz and Reuel face in trying to become parents. One forgets, however, that this is a true story, nightmare experience.

The opening night audience was introduced to playwright Elizabeth Fuller following the performance, who said she enjoyed the show and seeing herself portrayed on the stage by Ms. Younger, adding that it’s all true.  Everyone has a story to tell.  It’s just that some stories are more compelling and frightening to share than others.

“Adoption Roulette,” is a riveting production that performs at the Palm Springs Woman’s Club on the Pearl McManus stage on Friday, February 7, at 7 pm on Saturday, February 8, (two performances – 2 pm and 7 pm) and Sunday, February 9 a matinee at 2 pm.  For reservations and ticket information, contact DETC by going online to: www.detctheatre.org.